Chris Burden, we learn from the flood of promotional material accompanying this fine show, his first major exhibition in the US in more than 25 years, lives with his wife in Topanga, California. He chose this remote canyon because it was a safe haven for junk – items of interest that, worked into an installation or left as is, might easily end up on his ceiling for decoration or in a museum as art.

It is instructive, in the light of this revealing retrospective, to think of Burden’s early performance pieces (presented here, alas, inertly, in photograph albums) as the inverse of his later work. I followed the most gruelling enactments at a close distance in California (the one involving self-inflicted cigarette burns left my small son sleepless for weeks and myself queasy for longer), and had fallen in with the general assumption (revved up by a famous piece from 1974 that crucified him on top of a Volkswagen) that, in order to protest about violence against humankind, Burden was assailing the living shrine of himself. But, after viewing this show, I now think what had seemed to me a brutish assault on a breathing organism might have been, for him, the transformation, through extreme measures, of an interesting piece of junk: and that the most compelling object lying around the backyard of his life was his body – a material that could be exploited at will via pain and exhaustion, and would allow him to explore the psychic and moral consequence of deep shock. Call it art, if you will. Most of us did at the time. I am talking about the 1970s, when his youth and energy could withstand such self-torture as touching two electric wires to his chest, having himself shot through the arm with a 22k rifle, lacerated with glass, and stashed for five days in a claustrophobic school locker.

What whispered “artist” was less these extreme interventions than the installations that succeeded them. All who saw Burden’s 1987 inaugural presentation of every US submarine ever built will remember the ghastly thrill – frisson is not too strong a word – of encountering the deceptively innocuous cluster of killer machines suspended from the very high ceiling of his Los Angeles gallery. Cardboard models they may have been (a choice that brought up the latent association of boy-toys), but they totalled 625 and, swarming above the implied cloak of the oceans that hid them, they were creepily terrifying. It must be said that, in the New Museum’s gang’s-all-here rally of so many other strong works, the floated submarines now look tidy, almost parked. But gather is what retrospectives must do, and director Lisa Phillips has curated something of a triumph, corralling enough work to display on five floors and make up the quorum a retrospective exacts. Her greatest achievement, we learn, was convincing Burden to show anything inside at all – he has not kept his dislike of the museum’s structure a secret. Only after they had worked in good faith to no avail for several months on his proposal to place work exclusively on the museum’s outside walls and leave the inside empty – in effect, reversing the fabric of a space he found uncongenial – did Burden give in. He did still pull off two outdoor installations: however, the one involving two (Twin?) towers; the other, a boat five floors up, a direct reference to Hurricane Sandy (should the water rise that high next time around, it’s time to get aboard).

On opening night, the VIP class crowding in to view bad-ass installation saw Burden’s point: the New Museum is not always flattered by the art it presents and some of his key pieces don’t inflate. Crammed against a wall shared by other work, the miniature A Tale of Two Cities, which conjures up a warring metropolis with 5,000 toys, trades the invincible power of a Samuel Goldwyn movie-set for that of an amateur video game whose aliens seem vulnerable and whose fronds droop with the bend of the recently uncrated. In such close company, the Three Arch Dry Stack Bridge, too, held up only by gravity, loses the tension (that perilous edge Richard Serra would later take to the stratosphere) of something looming precariously that could topple any minute. Still, the museum comes off well with the preponderance of Burden’s work and does well by him too.

There is enough space to stroll around the signature bridge he fashioned of interlocked metal. Remember Erector Sets, which soared hard-edged metal structures up and out long before their dangerous possibilities were gentled by Lego? Burden’s iterations seemed fresh at the time and they have aged gracefully. At the opening, the generally discerning art critic Jason Epstein thought them disappointing, the sort of thing we used to make as kids, albeit scaled up. Well, yes, we may have built bridges, but we did not scale them up. He may not have experienced the impact these erections had on the rough desert landscape (I’m thinking of Burden’s 40ft Step Skyscraper) as opposed to on his nursery floor or on the museum’s slick surface. And I would wager that no one thought of compiling an entire assemblage of bridge parts into a coffer that displays on the third floor like a grand Cabinet of Curiosities.

The balance pieces come off best. The carefully cantilevered pristine Porsche suspending a pocked meteorite – or vice versa, as is the conceit – retains its defining qualities of irony and tension and conveys as much of its quizzical majesty as possible removed from the Topango setting of Burden’s scraggy outdoor studio. Across from it is a crowd-pleaser aimed at the stack-heeled, close-cropped, unisex youth that is the New Museum’s cheering section. The intricate engineering that pairs disparate ready-mades of a small, dented motorcycle and a huge cast iron flywheel is hypnotic. Like tourists timing their visit to Yellowstone’s set-your-clock-by-it fountain spray, they gather round the contraption every 90 minutes to watch someone mount the engine and rev it three times, funnelling its exhaust out through the wall while setting the three-tonne wheel behind it in seemingly perpetual motion – until it winds down again. Metaphor is not useful here. Big Wheel is what it is, a glorious inversion of Burden’s perilous performances – the transcendence of junk into thrill and whatever meaning you choose to give it.

Clearly Burden was pleased. Word had got out that he hadn’t shown up for the installation, but he gave his imprimatur opening night, meeting and greeting until heading out to his celebration dinner at the Bowery Hotel.

For me, the larger takeaway of this show is that, while Burden’s influence has been widely acknowledged, most of those borrowing his earlier vocabulary of here-but-not-here, potential collapse and self-infliction (think Abramovic and a roster of present day artists extending to China), have missed the overarching point. None of Burden’s exploitations, interventions and ordeals has been directly about himself – himself, that is, as flesh and body – but rather about himself as object, for which breath is inessential and pain meaningless. What all of Burden’s work seems to be about, whether using his body, a Porsche, a cannon or a toy, is transcendence: can I take junk and make it urgent, engaging and transformative? 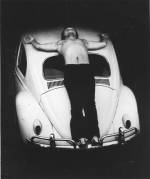