Richard Serra’s 2008 Exhibition at Gagosian gallery, which closed just before Christmas, showed that the American sculptor was working at the height of his powers. A true colossus, both intellectually and materially, in both America and Europe, he brings dread to architects whose buildings are fortunate enough to receive his work for exhibition. At the Guggenheim Bilbao many who saw his work installed there recently felt that it markedly diminished the enfolding postmodern ‘baroque’ building which enclosed it, not just in scale adjustment, but also in intellectual and aesthetic terms, all due respect of course to the architect there, his fellow North American Frank Gehry.

Latterly, in the last quarter of 2008, their young architect David Kohn was involved, on site, in raising the actual new-built height of the internal volume of the spacious new gallery off Kings Cross to match the size of Serra’s new pieces. Significantly, a 1200 square metre, 450mm deep reinforced concrete slab was created to carry the full weight of Serra’s freestanding sculptures. Further, in the three major display spaces, four large steel sculptures were neatly installed. This has been the first major show of Serra’s work in l6 years – an oversight close to that which has applied here to his painterly equivalent from Germany, Gerhard Richter.

As with the Bilbao experience, Open Ended is a major piece that has to be physically known by directly perambulating, stepping in and out, to convey its full meaning to the visitor to Gagosian. The Bilbao sculpture, there entitled The Matter of Time, with its torqued, elliptical spaces held more meaning than that Museum’s own proffered space, and The Matter of Time came as a result to become permanently installed in Bilbao. Serra got the idea for these ellipses made of steel from the church of San Carlo alle Quattro Fontane, Rome, designed by Borromini. By viewing at first what appeared to be at right angles from the oval space on the floor there from a side aisle, and then by directly moving on to the central aisle, he realised that these ellipses there were not actually at right-angles to each other, as he had first thought. At Gagosian, the first works that greeted the visitor, the two Torqued Trusses in which it is possible to stand, are in fact even taller than those shown in his 2007 retrospective, at the Museum of Modern Art, New York. “I wanted to make them better”, Serra stated enigmatically. Then there is a long slab of steel, given the name of a Portuguese poet Fernando Pessoa, who wrote of ‘Dream Ships’, and the ultimate extent of human ambition, no less. In the sculpture Open–Ended at Gagosian, Serra sought to resolve the challenge of the two ellipses, as originally did Borromini. The visitor gains different perceptions at different stages of this progress through the sculpture. Serra pointed out that the Gallery dealt with every aspect of his work in this show, except for landscape, which of course could not be incorporated.

Serra’s show at Gagosian was a rare bonus for London, and perhaps given our knowledge of the vast and cavernous spaces at Tate Modern (and indeed the river site) can somewhat optimistically be viewed as an interim appointment. Or else, it is an opportunity severely missed. At least long may we cherish the Liverpool Street Station presence of Serra’s 17-metre sculpture at the entranceway. Serra’s DNA, or indeed that of his principal oeuvre, betrays a special relationship with steel and heavy engineering. Serra’s father had been a shipyard worker. It also indicates in discussion, that Richard Serra will return to the landscape pieces. His commemoration of his late friend and colleague Robert Smithson created after Smithson’s early death in l973, was entitled “Spin out for Robert Smithson” and was set in a woodland clearing, consisting of three steel slabs counterposed. The distinguished commentator and critic Yves-Alain Bois said: (and Serra is quoted here) ”The plates were laid out at twelve, four, and eight o’clock in an elliptical valley, and the space in between them forms an isosceles triangle”.1 I have spent some time surveying Spin Out says a bemused Yves-Alain Bois, ”trying in particular to determine whether some sort of geometry was at work there, and never was I able to come to that conclusion (on the contrary, it seemed to me that any a priori geometry was absent, and that a work like Shift was a function of the topography). And Serra is right to express his reservations and prefer to speak of the work in terms of parallax and the progress of the spectator, since in no way does he work with a view to the recognition of a geometric form in his sculpture - he does not work, as he puts it, “for the sake of anything in that way”. So here it must be said that Shift (1970-1973) remains a masterly insertion of sculpture in the landscape, fully adapted to the topography. Just as his various works contained in gallery and museum interiors proclaim sculpture and steel materiality, so do his longstanding interventions and penetrations into natural topologies re-assert man’s place in nature, through his external awareness. It must be said of Richard Serra that he is certainly, for the latter part of the last century and for our own today, increasingly a supreme figure who has pursued his own carefully perceived development. Perhaps he is indeed, the major sculptor of this age. 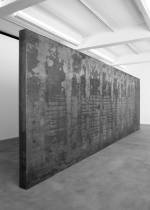 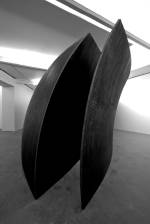