James Rosenquist at 70? It is hard to believe that he has reached such an age. In New York recently, he looked closer to 50. Celebrated at the Guggenheim Museum, he slips easily into the status of living master while successfully avoiding the imposed gravitas of elder statesman of American painting (which, of course, he is). This exhibition, with its enlightened use of the Annexe Wing, provides a perfect venue for such a retrospective - notwithstanding the constraints that space in the main Guggenheim spiral might have implied - and the combination works well. Even the masterly 'F-111', (1965) is not cramped here and the painting (10 feet x 86 feet) can be studied at ease: a succinct comment on a society of abundance, placed at risk through war. The work takes early cognisance of the military-industrial complex and the determinism that ensured its survival through the Second World War; a dynamic wealth generator that underpinned the burgeoning economy of the 1950s and 1960s. This painting is given full priority, exhibited here around four walls (as originally done at the Leo Castelli Gallery in 1965). Invaluable too - for students and curators alike - are the studies for collage, exhibited on the second level of the Annexe. 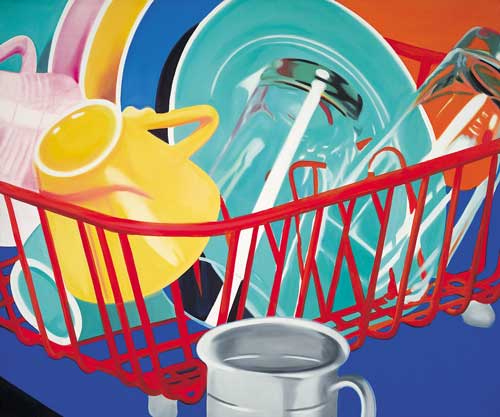 Rosenquist had learnt how to handle extreme scale of painting during his spell as a billboard painter, first during his vacations from the University of Minnesota, and later during his time as a commercial artist in 1957. Before this, he had been fortunate enough, at the Art Students' League, to train under George Grosz. By 1960, a painting such as 'Zone' with its sombre, fragmentary, juxtaposed images, would show how radical edge to Grosz's perception could strike home. In 'I Love You with My Ford', the conflicting demands of lover and much loved personal transport collude together. Predictably, 'Marilyn Monroe' also appears as a theme. Almost prescient, an undertone of violent elision can be detected.

The well-recognised 'President Elect', (1961-1964) remains a classic history painting of the recent past, juxtaposing the image of Jack Kennedy with a slice of cake crumbled by a female hand; these images in turn overlying a fragment of yellow Chevrolet. This is a 'questioning' painting, raising succinctly the issue of the President Elect's market appeal. The preparatory collage for this (1960-1961) is also exhibited here and so provides the viewer with clear substantiation of the artist's working method. 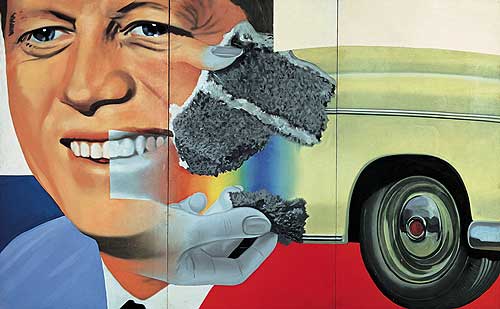 Justifiably, this is an exhibition that is not only about history (of the later 20th century) but one that seeks to review history as well. There is, curatorially, a responsible attempt to relate Rosenquist with not just the more definitive 'Pop' artists of America, but also their European precursors. So, Warhol, Lichtenstein, Jim Dine, and Claes Oldenburg, for example, are lined up on one side, and Paolozzi and Sigmar Polke, notably, on the other. It becomes an issue of relative scale. Paolozzi was never a billboard artist, but the opportunity exists here to draw reference with certain key early graphic works of Paolozzi, such as his 'Meet the People', (1948, illustrated in the superb catalogue here) and 'Bunk: Evadne in Green Dimension' (1952/1972). Paolozzi was there first, and an early Sigmar Polke, 'Lovers II, (Liebespaar II)' (1965) draws out the European parallels. But as early as 1962, Rosenquist had exhibited at Bellamy's Green Gallery, thus demonstrating his link to Pop, but also indicating his divergence from the strict tenets of the movement. Rosenquist's colour palette was more varied and more sophisticated in use. By creating a three-dimensional aspect to form - yet avoiding conclusive forms overall - Rosenquist could suggest a more open context for each work, and so escape from the traditional perspectival and figure/ground techniques otherwise tolerated by his Pop colleagues. 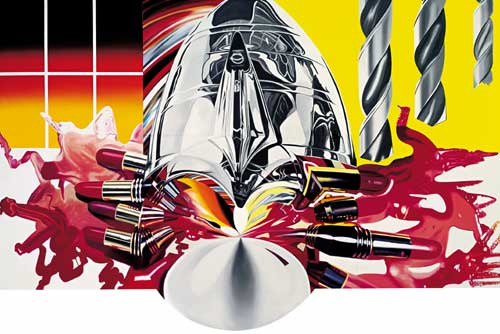 A work such as 'Dishes', (1964) transforms an unpalatable corner of the dishwasher tray into a superb, poetic composition of colourful, yet seemingly still randomised, elements. So by the mid-1970s, as in 'Paper Clip', (1973), a supreme triumphalism is detectable in his technical mastery. Rosenquist, in a famous 'no hands' gesture to that effect, transformed the work into sculpture with commensurate versatility. There follows something of a key period of transition, epitomised by 'House of Fire', (1981)(see 'Sketch for House of Fire') and 'Welcome to the Water Planet' (1987), which is also viewable in etching form. Rosenquist's sense of colour composition and manipulation on a large scale now enters the subject-world of space galaxy and its accompanying dynamics.

We are a long way from the abrasive, brutalist sculpture, 'Tumbleweed' of 1963-1966. Rosenquist readily seemed to embrace the visual grammar of the Sci-Fi and Scientific American projections and speculations of the 1970s - but he never quite lost his head. Perhaps, based in Florida, he might carry out a similar investigation into the swirling myriad world of marine biology, the world of the lost archipelago. 'The Swimmer in the Econo-mist' (1997-1998) exemplifies this spatial exploration as knowing no bounds, where fragments of Picassoan detail, (left-half) become subsumed and obliterated in this polychromatic convulsion. By contrast, to survey the collage works, still taped on, is to touch earth. 'Collage for U-Haul-It', 'U-Haul-It', 'One way Anywhere'; and for 'Bandini' (1968) and the painting 'U-Haul-It' (1967) can easily be compared, and the process is rewarding. These pieces also summarise this superb show. The works contain, in the collage's experimental title, and with its final explicit version, the underlying Rosenquist philosophy. Open horizons exist, but the task then is more challenging. James Rosenquist meets the challenge and miraculously keeps his cool.

This exhibition came to the Solomon R.Guggenheim Museum direct from the Menil Collection, Houston, and in July 2004 it will at last reach us in Europe, arriving at the Guggenheim, Bilbao. It would look good, and right, if it got to Tate Modern too. Meanwhile it's not so far to Spain in July. Such exhibitions, and such superb catalogues, with curatorial precision in elucidating the working methods of the artist, his sources, and hence historical precedence, are increasingly rare. Hopefully the show will travel 'complete' to Bilbao, and Rosenquist too. 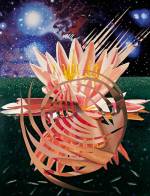