The Gagosian Gallery in London is currently showing (until 19 May) a key exhibition of contemporary sculpture. Works by Giacometti, Fontana, Twombly and Serra, leave no doubt of the pre-eminence of Richard Serra. This article discusses previous works by Serra in the USA and Spain and considers why, for Serra, architects are a problem rather than a solution.

Richard Serra and Robert Smithson each famously tackled the notion of the Picturesque in landscape, and in widely divergent ways. The works displayed by Serra at this North London exhibition, in company with others by Alberto Giacometti, Lucio Fontana, and Cy Twombly, go some way to remind us of the seminal role which Serra himself has played in the development of sculpture since the 1960s. In fact, at this exhibition, entitled 'Living, Looking, Making', it seems that the exhibition revolves around Richard Serra's work: considerable intellectual force has been expended in assembling and setting out the works, and it is to good effect. Although Serra is pre-eminent, the works of the other artists are themselves enhanced in the process.

Both Smithson and Serra had struck at the idea that 'no picturesque park can be fixed in the mind.' A fundamental break with pictorialism always being thrust at them both was firmly put in place. In the long run, it is Serra’s own sculptures that have consolidated this break more effectively. Gallery 1 at the Gagosian here is confirming evidence of this achievement. In the large, rectangular, high-roofed space are positioned three pieces. 'Corner prop No 8 (Orozco and Siqueiros)' (1983), faces across to 'Back to Back' (1987) and diagonally opposite is 'Do it' (1983). Of course, these three works stand separately, opposite each other in the space, but they also come together looking across from the three corners, past the three Twombly works, and four Giacometti pieces in their separate clusters towards the centre of gravity of the space.

Serra had said, in the key text by Alan Bois from 1983, A Picturesque Stroll around Clara-Clara 'The site determines how I think about what I am going to build, working from the elevation.'1 While the viewer is privileged now and here to see the work of Giacometti and Lucio Fontana as well in the great white spaces of Britannia Street, close to Kings Cross, he or she may not fully realise that this is a set-up, allowing Serra to predominate. His works stand here heroically on their own, and, as with Gallery 1, likewise in Gallery 3, where 'Plate Pole, Prop' (1969-1983) and 'Sign Board' (1969) face each other directly from one side of the room to the other, uncompromisingly across the three Cy Twombly works, and the single Giacometti of 1956.

Of course, if there were any competition here Serra administers a knockout, in his characteristically Cor-Ten steel rigour. The Gagosian curator gives a clue to this set-up, showing Serra’s powerful evolution from 'Sign Board' (1969) to 'Corner Prop No 8 (Orozco and Siqueiros)' (1983). Here, the spectator must almost prostrate him or herself in abject (if voluntary) submission. (How does this work maintain such a metaphysical equilibrium?) Serra was 'macho' here, to be sure. And he is trying to put architecture itself down, perhaps justifiably for today (and in mind of Bilbao), given all the signature architects thronging around. Serra doesn’t play signature work, like Gehry. The message is that Gehry is an architect, not of the sublime, at least but of the mere picturesque.

Inevitably, the conversation switches to Bilbao. Serra is here jousting, space-wise, with Gehry the architect. Serra liked to list the motions of sculpture 'to roll, to bend, to shorten, to twist, to dapple, to crumple.' This was his listing of sculptural movements. And in this joust at Bilbao (Gehry as Don Quixote) the sculpture ironically echoes the building that houses them, so making this threatening spatial sequence one to walk through tentatively, even redoing Gehry’s curves, making them seem somewhat inept. Serra willingly and consciously here parodies the baroque architect Borromini, ruthlessly leaving for Gehry the contrapuntal role of Bernini, the rival. No hostages are taken, no concessions to the architect. You find it is 'game, set. And match', as you slide into Serra's tight convolutions at Bilbao, aware that the architecture itself is in question. Serra's 14 ft high sheets of steel oscillate visually, looming forwards and back again. They are independent of the architect’s complex (and illogical) structure, which is left in question now. Serra, however, is reaching for the sublime, no less. The intrinsic, inherent tonality of the Cor-Ten steel lifts visual impact out of the merely artificial mode. Indeed one has to commiserate with Gehry, unable himself to reach 'sublimity', although replete with picturesque games.

When Robert Smithson addressed Serra’s landscape piece 'Shift' (1970-1972) he referred to its picturesque quality.2 Serra was non-plussed. He had never intended to embrace the pictorial as far as site was concerned. Serra saw to it 'that the site is redefined, not re-presented.' 'Shift', as it flows gently down the gradient, makes the viewer aware only of the real topography (not that of the narrative) and the formlessness of the terrain, and the actual indeterminacy of the landscape. In 'Spin-out (for Robert Smithson)' (1973) Serra describes the placement of three steel slabs in geometric terms, making no allusions to what the spectator must actually experience. He even deliberately misleads the viewer, by indicating that he is giving a pass key to the experience, but typically, and intentionally he offers the wrong key, by saying that the spaces between constitute an isosceles triangle. The Gagosian directors have wisely not fallen for the trap of creating an isosceles triangle in Gallery 1 here, but its not far off. Yve-Alain Bois, in his keynote article on Serra found this completely absent in 'Spin-Out' and that, consequently, the work was a function of the topography of the space, which is tight.2 There is no elevation for Smithson, and no plan.

Serra, in an exchange with Eisenman, rejected the latter’s proposal that Serra’s sculptures framed the landscape. The notion of the picturesque was never relevant. Smithson was interested in the picturesque. Serra was opposed to any narrative concept of discontinuity. Serra 'has no punctuation in the Brownian sense' and hence no 'full-stop'. Moreover, there is Serra’s abject hostility to architects as such. He is interested in the sublime. One can argue that Serra’s sublime is that of the 'sublime-picturesque' and no way that of the 'beautiful-picturesque', to which Gehry is drawn.

And so, the show at Gagosian is a succinct reminder of the importance of Richard Serra, of his intellectual rigour, and his success in drawing out the sublime, eschewing the blandishments of the merely beautiful. This exhibition is a timely marker for all interested in contemporary sculpture today. 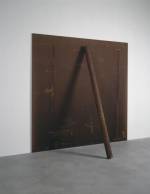 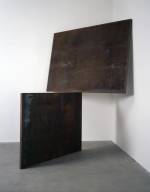 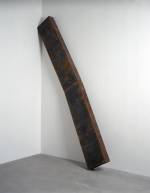