A decade ago, setting up radical art studios in the workshops of a largely abandoned military electronics complex on the fringe of Beijing was considered to be intriguing and provocative. Today, Factory 798 is a warren of contemporary art galleries, studios and cafes, luring artists and visitors, students and collectors from across China and overseas.

Sculptors working inside a workshop inside 798

The renamed 798 Art District (also know as Dashanzi Art District) functions for gallery owners, artists and visitors on many levels. The walled compound of red brick factories, warehouses and offices set on a tree-lined grid of streets and lanes offers a miniature sanctuary. Although a short distance away, the surrounding mayhem of Beijing's urban sprawl, which is throwing up forests of apartment blocks and traffic-choked flyovers, seems a far-distant world, unrelated to 798's creative cocoon.

For Chinese artists reinterpreting Communist propaganda, particularly the images and figures of Chairman Mao Zedong, 798 contains (if not preserves) remnants of that history itself. Fading slogans exhorting the toiling masses can still be seen on some of the factories' walls, reminding artists and visitors of the fervour that fuelled the Chinese Cultural Revolution (1966-76). A scattering of sculptures and paintings from that era provide other historical echoes.

Not all of the buildings have been occupied for art production and display. Occasional bursts of steam and clangs of metal from operating workshops provide other links to a past when the site was closely guarded, off-limits to outsiders. But most of the plant now serves as platforms for contemporary artists, Chinese and foreign, to express their visions of the culture and societies they inhabit.

Factory 798 has an artistic pedigree of its own. One of six large sites producing top-secret components for the Chinese military until the 1990s, 798 was built by the East German government with funds earmarked for the Soviet Union as reparation for World War II. Constructed during the late 1950s and early 1960s, just before the Sino-Soviet split, the factory was meant to be an example of harmonious collaboration between Socialist countries, led by the Soviet Union. Its Bauhaus-inspired designs were also meant to showcase (to selected observers, of course) Mao's vision of China's future as an advanced Socialist state founded on heavy industry and Communist ideology.

The plant came to an inglorious end in the 1990s, when the Chinese government began rolling back its subsidies for state-operated factories. A large number of the buildings were left vacant, some the size of football fields, many of them flooded with natural light. This situation opened the door for some canny officials from the Central Academy of Fine Arts who were looking for an inexpensive factory site for its sculpture department. Soon after, they were joined by a self-proclaimed group of independent artists desperate for a new home after their efforts to create an artist village elsewhere had provoked more restrictions from Communist authorities.

The attraction of 798 for artists was not only the low-cost space, which they began to convert into studios and live-in lofts. Drawn from across the country, these artists were also attracted to the site's location in Beijing's Chaoyang District. The region became home to foreign embassies and institutions back in the mid-1990s, and few foreigners other than students were permitted to live anywhere else in the capital.

From that modest beginning, 798 has become China's premier hub of contemporary art. At this point, approximately half of the factory compound - about 100,000 square metres - is rented. Space has been taken by about 50 galleries and art centres of varying sizes, including 798/Red Gate Gallery, Beijing-Tokyo Art Project, Tang Contemporary Art, 798 Photo Gallery, 798 space, Cheng Xin Dong International Contemporary Art and Alexander Ochs Galleries Berlin/Beijing. Other occupants are artists and such commercial ventures as bookshops, bars and restaurants. Guy Ulens Art Co of Belgium has rented the largest space, some 4,500 square metres, while recent rumours named the Guggenheim art company as a future tenant, possibly seeking as large an area as 10,000 square metres.

The works of foreign contemporary artists are also regularly displayed. The Tokyo Gallery, for instance, focuses on the exchange among artists in Beijing, Tokyo, Seoul and Taipei. Cheng Xin Dong's gallery and Alexander Ochs Galleries Berlin/Beijing have French, German and other European artists' work on their rosters. At any one time, foreign artists from France, the USA, Belgium, Australia, South Korea and Singapore can be found in one gallery or another. With some 300 artists in residence, or represented in studios, a list of prominent figures is bound to be incomplete. Nevertheless, critics and buyers have singled out Huang Rui, Chen Lingyang, Qingqing, Chen Wenbo, Cang Xin, Li Xiangqun, Jia Difei, Yu Fan, Yu Gao and Sun Chengyu, among others.

The success of periodic art festivals has contributed to 798's viability. In the past three years, these festivals have lasted between three and four weeks, with performing artists and traditional and modern musicians added to the attractions. During these weeks, some residential artists also open their studios to the general public.

One important aspect of 798's activities has been to protect its existence. The authorities have not always embraced the artistic and other freedoms fostered within 798's walls, but the feverish urban expansion under way in most parts of Beijing has prompted developers to consider converting the site to more lucrative uses, such as high-density housing. Indeed, in 2004 and 2005, rumours circulated that the owner of the land (Seven Star Group) was on the verge of selling the site for residential construction. Those worries, later expressed and amplified through the media, and a proposal presented by artist Li Xiangqun at the People's Congress, helped win public backing for 798 from both the Chaoyang District and Beijing's municipal government. With Beijing serving as host for the 2008 Olympics, officials decided that the 798 Art District was an important showcase. By the autumn of 2006, city officials had even helped to organise an art event, 798 Creativity Culture Festival.

If 798's future seems more assured than ever, what is the significance of the art that is being created and sold within its walls? The zone's fame (798 now features in many guidebooks to Beijing) is not without a downside. Some artists living and working in 798 sarcastically refer to themselves as 'cultural animals', stalked by visitors whose eyes are eager for a view into private studios. (In fact, some of the concrete crannies inhabited by artists are not unlike the depressing tiger cages at the Beijing Zoo, sans jungle frescoes.)

Of greater concern is the rapid commercialisation of 798. Since rising rents and other costs make it increasingly difficult for some galleries and cultural institutions to survive, they are turning to more lucrative activities. These include using their sites to promote launches of big brands (Sony and Motorola, for instance), and even foreign fashion shows. That said, the commercialisation of Chinese art, both at home and abroad, has significantly raised the value of many of the works.

Such pressures affecting the global marketplace are likely to increase. The owner of the Seven Star Group is eager to maximise the rental income paid by artists, galleries and other facilities. Rents have increased more than ten-fold during the past decade and will continue to climb as fashion and leisure companies make bids for space. Already, some observers are predicting 798 will suffer a fate like that of New York's Soho neighborhood as high rents divert artistic talent elsewhere.

Local and city governments have plans of their own, too, to make 798 a so-called art-centralised business district (art-CBD). Their objective, beyond a possible boost to finances, is to show the world that Beijing should not just be regarded for its historical sites (the Forbidden City, the Great Wall and many temples dotting the hills to the north and west). International attention has been fanned by such publications as Time, which has named 798 one of 22 urban centres with significant cultural meaning. Editors of rivals Newsweek and Forbes have also praised 798 for its phoenix-like transformation from a former industrial works.

Artists working in 798 today still say they are uncertain about the government's future tolerance of their work. Some of them claim that they have been encouraged, or merely left alone, during the past decade, in part because officials are not sure whether to consider contemporary art as 'genuine' art. The authorities do not support avant-garde artists, per se, viewing them as potential threats to society. So far, officials have tolerated their creativity while keeping them under close watch. The often critical treatment of such subjects as Chairman Mao, for instance, now barely raises an eyebrow among officials. Still off limits, it seems, is any consideration of the 4 June massacres that happened near Beijing's Tiananmen Square and in other Chinese cities in 1989.

Other restrictions continue to constrain 798's development. Newcomers, for instance, must submit themselves to the Seven Star Group and demonstrate that they meet certain criteria. The same goes for existing tenants seeking to renew their contract. Under such scrutiny and increasing financial pressures, the question remains: can 798 remain in the artistic vanguard? For now, though, 798's development remains part of Beijing's official blueprint as the capital promotes itself as a cosmopolitan city. 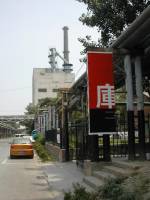