The Liverpool Biennial 2012 – the UK Biennial of Contemporary Art

The Liverpool Biennial 2012 – the UK Biennial of Contemporary Art

The Liverpool Biennial 2012 brings together dozens of different exhibitions comprising artworks by more than 240 artists. Launched in 1999 and now considered the largest Contemporary Visual Art Festival in the UK, the event that will run until 25 November is diffused in many venues around Liverpool.

Like past years, this 7th edition incites the visitor to be in contact with and become acquainted with the urban structure and atmosphere of its host city. Doing full justice to its leading theme, “Hospitality”, the visitor is invited to explore and meander through the city’s street and docks trying to feel at home, creating common ties with the artistic propositions of the Biennial.

Hospitality, suggesting to receive and give a warm welcome to guests and unknown visitors, is typified by including new relationships with the artworks on display. Under this umbrella issues such as immigration, territory, body, cultural encounters and politics are taken into consideration. These are explicitly addressed in The Unexpected Guest, the exhibition scattered throughout almost all of the venues that are part of the festival. Some of the main locations of the Biennial are: the Walker Art Gallery, FACT (Foundation for art and creative technology), the Bluecoat, the Open Eye Gallery, Tate Liverpool, Liverpool John Moores University and The Cunard Building. Nevertheless, other small galleries and non-gallery sites are indeed where some of the best artistic manifestations of the festival can “unexpectedly” be found. The effort of local artists in symphony with the hospitality theme allows great art programmes in places such as the Wolstenholme Creative Space (WCS), the Static Gallery and Artist Studios or uses surprising installations, such as putting the upper floor of a pub to good artistic use.

Highlights of the Liverpool Biennial 2012

Tate Liverpool’s participation over the years has always been a special feature of the event. Besides the interior exhibition with artworks from its collection occupying an entire floor of the museum, outside the Tate building there is The Source (2012), a video installation by the American multimedia artist Doug Aitken. Using the question “what is the source of a creative idea?” as a springboard, he conducted a series of interviews with personalities engaged in different types of artistic expression. 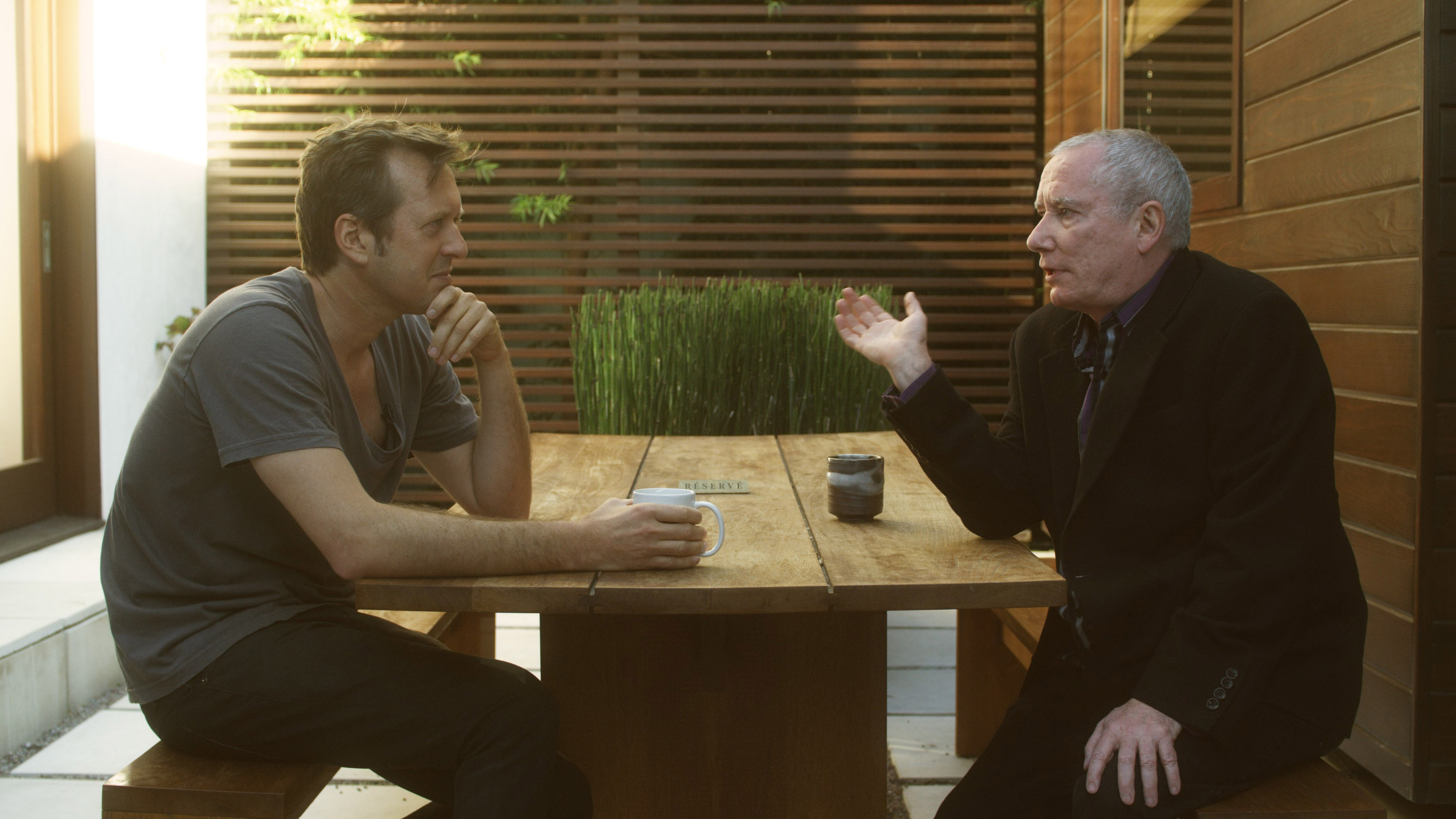 Musicians, architects, visual artists and actors can be seen in the videos projected in the round pavilion especially built for the work: there are six screens that randomly show the interviews. When one is standing in the centre of the circle, only a cacophony of voices can be detected, like a brainstorming of ideas. Walk in the direction of a chosen screen and you will encounter a specific point in front of it where the conversation between Aitken and one of his interviewees can be perfectly understood.

This experience reminds one of the very moment of a key moment of the creative process, when a mixture of information becomes a clear creation. Although the videos are all about the same topic, Aitken can obtain the most diverse and fascinating responses from his interlocutors, releasing many shades of light onto that question which has over the centuries inspired art theorists and historians, researchers and the public in general: from where does a creative idea originate?

In the front garden of The Bluecoat creative hub was placed the artwork 2-Way Mirror Cylinder Bisected By Perforated Stainless Steel, (2011-2012) by the conceptualist Dan Graham. This American artist who was a pioneer in the 1960s to investigating the relationship between body, perception and architecture made a reflexive structure where the viewer, apart from themselves, is also simultaneously exposed to who ever else is arriving at the cultural centre.

Inside the building, which is the oldest in Liverpool, the highlight is John Akomfrah's video The Unfinished Conversation (2012) about the academic Stuart Hall. Born in Jamaica when the country was still a British Colony, Hall came to England in the 1950s and was one of the main thinkers behind the development of cultural theory studies in the country. He lived in a period of drastic cultural and social change in Britain and became well-known for his contributions regarding questions of race, ethnicity and media.

Akomfrah had access to Hall’s personal archive and with historical footage produced the three-channel video installation that had its premiere at the Biennial. Combining texts by Virginia Woolf and Charles Dickens among others, with music and also extracts from Hall’s talks, the filmmaker offers a reconstructed and imaginary memory of what time and environment were like when this academic elaborated his theories. The finest film editing exercise (and was not at all pedagogical) was applied to produce an immersion into Hall's world.

The Cunard Building is one of the several historical locations in Liverpool to host the Biennial. In the past the building was a kind of lounge and ticket office for the shipping companies that carried thousands of immigrants from Liverpool’s docks to other continents. Maybe influenced by its previous function of 100 years ago or by the magnitude of its marble columns it is there that the predominant motif of the Biennial reveals its more explicit political intention.

Pamela Rosenkranz, for example, dispersed anthropomorphic forms covered by thin metal sheets composing the installation Bow Human (2012). The impression here is that there are human beings in a crouched position, trying to hide themselves, but what actually protects them are golden and silver leaves. The rich and bright colours of the sculptures are somehow disturbing as the metal sheets are sheltering figures in a position of despair or subordination.

The Open Eye Gallery, whose programme is exclusively dedicated to photography, presents the most intriguing artist of the Biennial, Kohei Yoshiyuki. In 1979, he shocked the visitors to a Tokyo gallery with black and white images of nightly sexual encounters in the parks of the Japanese capital. Yoshiyuki used infrared flashbulbs to register not only the individuals caught performing sexual acts but also the many voyeurs who had hidden themselves to observe the encounters.

Decades after the scandal that his photos triggered, in a period of cybernetic voyeurism accessible to anyone with an internet connection, the black and white images are perhaps not considered so offensive. However, the system through which they are on display at the Open Eye Gallery revisits the controversy that the photographs provoked in the past. They have been hung in a completely dark room. Before the visitor enters the room, a gallery assistant hands out flashlights to the viewer. Reacting like a guard carrying out a night watch or maybe as an equipped voyeur, the visitor can then open their eyes to the scenes that the camera of the mysterious photographer captured.

The Wolstenholme Creative Space, a not-for-profit contemporary art gallery and home to artist’s studios, presents an Inhospitable Landscape, transforming the exhibition space into a desolate and obscure environment. Dry tree branches and leaves composing the large installation aim “to bring the outside, inside”. If an intrepid guest explores the place they will find in this the reverse side of the driving force of the Biennial. The brave visitor will discover concealed within the composed “inhospitability”, a terrain favourable to captivating artworks such as the immersive audio-video installation Dystopia (2012) by The Hive Collective.

Another studio space that in turn is part of the Biennial, the Static Gallery, nurtures unwelcoming gestures inside its hub of 10 studios for artists and creative professionals. There the artists Adriana Galluppo and Sascha Mikloweit have created a wall, a barrier blocking the main corridor of the place, separating the inhabitants of this Static organisation. The biennial visitors are welcome to view the division that has obliged some artists to go looking for alternative paths to cross the building.

The upper floor of The Monro pub is another unconventional exhibition space. There the artist Markus Kåhre has reconstructed a room reassembling what the building, that dates back to the 18th century, was like at that time. The simply decorated room deceives the senses of the visitor when on passing in front of some of the old mirrors their reflexion is not seen. A trick of illusion allows the artistic experience that confuses the notion of reality, past and present.

After comments regarding some of the attractions currently on show in Liverpool, it is important to note that for an art enthusiast who is used to attending art Biennials all around the world, the concept of the Liverpool Biennial can appear somewhat dissonant. The event, that for 10 weeks takes over the city, is not a Biennial in the commonly used sense of the word on the art circuit – derived from the oldest of its kind, the Venice Biennale – that nowadays describes an international contemporary artistic showcase with a curatorial project that permeates artworks chosen by a curatorial team. In this kind of exhibition the intention to induce a relationship between the artworks should be blatantly obvious to everyone. The Liverpool biennial is a festival of contemporary art and although there is a guiding theme and a set of intentions, a clear curatorial knot is not the proposal. Some of the shows, such as Bloomberg contemporary and John Moores Painting Prize, are part of the rich programme of events but are not necessary related to the other exhibitions. The Liverpool Biennial is called Biennial for the honest reason that gives meaning to the term, it occurs “every other year”.