As we enter a large hall on the sixth floor of the Museum of Modern Art leading to Isa Genzken’s first retrospective in an American museum, we are greeted by a group of elegant mannequins clad in cheery clothing.

There are a couple of male figures in plaid jackets and long skirt-like wraps; an elegant masked lady wrapped in gauze and plastic is perched crossed-legged on a chair; another woman in a sun hat and jeans is peculiarly twisted on the floor; a black child, naked except for a hat and a belt, is stretching her hand to hold up a bunch of bracelets … All 14 of them are uniformly young and beautiful, and adorned with kaleidoscopic accessories: flowery boas, extravagant shoes, hockey masks, pipes, hula-hoops, translucent spheres and paper decorations. “Dressed-up”, in fact, is a euphemism for “half-dressed” or even undressed, except for a few crayon marks on the mannequins’ skin. In any case, much of the plastic skin is showing, and the bedecked dummies look like clones from a risque runway coterie.

This motley crowd, the wall label tells us, is the German artist’s latest creation, Schauspieler (Actors), and invites us to “move around them” to feel as if “we, too, are actors in a theatre or film set”. The make-believe actors are as attractive as mannequins can be, but it is difficult to follow the invitation because their frozen display is arranged as if on stage, with all the figures except one cordoned off by a tape on the floor. Also, even if we could join them in their silent celebration, some of us would feel uneasy amid these nearly perfect lean youths and children. This is not only because they are dolls and we are human. There is something uncanny about them in a doppelganger sort of way. Perhaps, it is Genzken’s attentive gaze watching over the display from a poster, or the warning on the wall label that all her work is “autobiographical”. Suddenly, we realise that at least one of these oversized dolls – maybe the naked one, posted in a corner and turning its gaze away from us – stands for the artist herself. The rest stand for us, no matter how different we may look in real life.

It is provocative enough to be invited to measure oneself up against a mannequin, and the rest of the exhibition offers us a clue to the evolution of Genzken’s art. In the mid-70s, while still a student at the Düsseldorf Academy, she began making minimalist sculpture that went against the grain of minimalism. Her long and slender ellipsoids and hyperboloids were conceived as mathematically precise, mostly wooden and mostly horizontal, structures that would conform to a series of painstaking calculations and meticulous craftsmanship requiring extensive help from scientists, carpenters, and technical specialists to produce objects that pushed the limits of feasibility of materials and their construction.1 The elongated curves of these objects were calculated using a computer program, rendering the objects fragile and expensive to make. Genzken’s obsession with technological processes and the precision of her early sculptures did not obviate her desire to assign a personal meaning to them. Ulrike Knöfel suggested that the very idea of exploring the technological and aesthetic possibilities of an ellipsoid as a shape might have come to the artist from her grandfather’s theosophical writings.2 Also, apart from the objects’ emblematic titles, such as Nüsschen (Little Nut), S. L. Popova, or Diana, it is difficult not to notice a frequent use in these objects of black, yellow, or red – the colours of the German flag. The critic and art historian Benjamin Buchloh, who knew Genzken before she was making ellipsoids, criticised their dependence on “content” vis-à-vis minimalism, but for the artist it was a deliberate choice: “Of course, it was exactly the ‘content’ that I wanted to bring back into the ellipsoids, so that people would say: ‘It looks like a spear, or a toothpick, or a boat.’”3

Quite apart from bringing content “back” to minimalism, Genzken’s fascination with technological progress, and her painstaking attention to an object-oriented world associated with this mode of thinking, led her initially to focus on photography. A good friend of many conceptual artists, including Dan Graham and Lawrence Weiner, she understood the photographic predicament of both the modern and postmodern age. Instead of deconstructing photography the way conceptual artists have done, revealing its ideologically manipulative relationship in relation to the world, Genzken made this technologically produced objectivity absolute. In her quest for this “new objectivity,” she glorified the photograph as a ready-made symbol of our relations with the world, proclaiming, for example: “I think that photography has a lot to do with sculpture – because it is three-dimensional and because it depicts reality. For example, I have always been able to relate to photography more than to painting. When I was photographing hi-fi adverts, I thought to myself, everyone has one of these towers at home. It’s the latest thing, the most modern equipment available. So, a sculpture must be at least as modern and must stand up to it … I have always said that, with any sculpture, you have to be able to say, although this is not a readymade, it could be one.”4 This attitude toward sculpture as a readymade technological – as opposed to material object – pits Genzken against the ideals of historic avant-gardes, in particular the one from the East. Direct and oblique references to the Russian avant-garde are frequent her work. Her reversal of Liubov Popova’s initials in Rot-schwarz-gelbes Ellipsoid S.L. Popova (Red-Black-Yellow Ellipsoid S.L. Popova) is just one example of the artist’s direct comment on such an ironic turnaround.

In the late 80s and early 90s, Genzken returned to the exploration of the logic of photography in other media, such as in her painting series Basic Research and MLR (More Light Research) as well as in her several sculptural Fenster (Windows). Despite some impressive works resulting from these forays into “light research”, it is in her quasi-architectural objects presented as sculpture that she truly excelled. In the mid-80s, she started moulding plaster in the shapes of miniature cross-sections of rooms, halls and other architectural elements, painting them and making them look simultaneously like interiors and exteriors of imaginary buildings – a cathedral, a bank, or an entire city. Toward the end of the decade, she changed the material of these objects, modelling similar cross-sectional spaces, but out of concrete and steel. Her talent for conceiving and fashioning architectural forms peaked in her Fuck the Bauhaus series, where she presented wildly ornate and hilariously wacky assemblages as models for new buildings in New York. Pizza boxes, wire mesh, mirrors, flower petals, light shades and sea shells were just some of the materials Genzken used to create these amazing visionary structures, which have to be seen in order to appreciate fully the architectural genius of their maker. Genzken’s New Buildings for Berlin are not as outlandish, but they offer an inspired alternative to what the artist considers a depressing cityscape.

Though German and living in Berlin, Genzken considers New York to be her second home. She first came to the city when she was 21 and fell in love with it. Some of her best work is dedicated to it, such as Fuck the Bauhaus, her collage book I love New York, Crazy City, and the installations Empire/Vampire and Ground Zero. Although engaging different media, all her visual paeans to the city are exuberant. While in Empire/Vampire we are confronted with gory but captivating cinematic sculptures of catastrophic scenes, the installation dedicated to Ground Zero overwhelms by the sheer variety of materials involved in the component sculptures. Hospital, for example, is assembled from paint, foil, tape, glass, fibreboard, casters, all mounted on a dolly on castors and topped with a vase with flowers. Apart from similarly varied assemblages, there are also four aeroplane window frames, apparently given to the artist by Lufthansa. It is in this visual lack of restraint in her latest creations that the emotional basis of Genzken’s art comes across most clearly. From personifying minimalism to identifying herself with either a doll or a sculpture, the central role of emotion in Genzken’s artistic practice is brilliantly captured by Weiner in his tribute to the artist: “Cut to the chase: Reflection on & about Isa Genzken. The objectification of emotion. Emotion as content. Emotion as material. Not at any time the subject. The subject is whatsoever brings about whichsoever emotion, Spiegel, Geist (with or without a reflection). Caught between ships passing in the night.”5 Here lies both the strength and the weakness of Genzken’s art. Its strength is in the energy and conviction with which she engages the viewer; its weakness is in its inevitable attachment to the artist’s mood. It may feel good to express oneself without restraint, but what if we do not feel comfortable following suit?

5. Cut to the Chase: Reflections on and about Isa Genzken by Lawrence Weiner. In: Isa Genzken: Open, Sesame by Iwona Blazwick, Yve-Alain Bois and Penelope Curtis, published by Whitechapel Gallery, London and Museum Ludwig, Cologne, 2009, page 27. 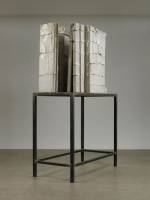 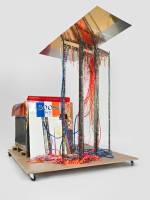 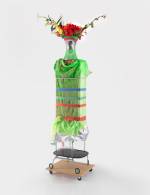 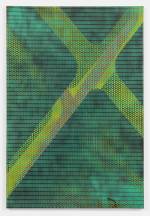 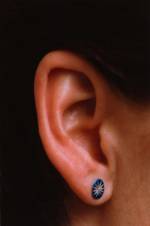 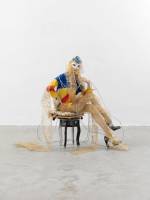 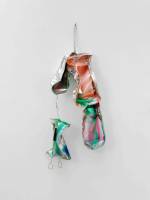 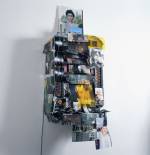 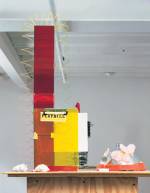 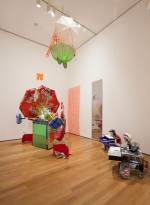