The beautiful surroundings of Edinburgh’s Royal Botanic Garden provide the backdrop for German artist Isa Genzken’s humorous, disturbing and powerful work from the past decade, including photographs, collages and, most arresting of all, mannequins.

There are four types of remains from shipwrecks. Flotsam and jetsam are the wreckage left floating on the sea, the latter having been deliberately jettisoned. Derelict and lagan are those remnants of the vessel and cargo resting on the ocean floor, the latter being recoverable. For the landlocked among us, it’s a useful way of regarding history. There are artefacts, ideas and entities easily identified and salvaged from the surface. Others lurk forgotten or obscured in the depths. This wreckage we call culture.

The strength of Isa Genzken’s work, displayed here in the exquisite surroundings of Inverleith House in Edinburgh’s Royal Botanic Garden, is to take this detritus and make new things with multiple meanings from it. Her art deals not with singular messages or the reconciliation of opposites, but with many shifting responses. It is humorous and disturbing, powerful and oddly, deliberately inert. The constituent parts are sometimes precious, sometimes worthless but take on numerous characteristics when reframed and juxtaposed. The thought that “this may be junk but, in the end, what isn’t?” may seem nihilistic, were it not for Genzken’s playfulness and ability to make us consider the constituents of everything. We are flailing in the sea rather than safe on the shore, and the flotsam is what, in essence, we cling to.

Cherry-picked from a decade of work, there’s an anarchic calculated chaos to Genzken’s artwork here that might seem clumsy and alienating. Materials appear thrown together. Lines clash and edges fail to join. Mirrors are tacked on. Collages overlap. Paint is strewn over images. Personal photographs are aligned shambolically with prints of Renaissance paintings; the resulting readymade composites are then haphazardly laminated. Most of the pieces are titled “Untitled (2012)”. It seems assembled by a dysfunctioning seditious robot and yet the eccentricities speak of private human narratives and interests. It repels and, in doing so, it captures interest, being as chaotic and associative as mind and memory.

Again and again there are composites that seem to question what it is to be an artist and to mock any assumptions therein. There are anatomical portraits of the muscles in arms and hands – the creative bodily parts, in an art sense at least. There are icons, both tongue-in-cheek and (self-) referential from Bowie, Michael Jackson and Diana Ross to Joseph Beuys and Nefertiti. There are frogs, perhaps as symbols of transformation, and lightning bolts as divine inspiration or retribution. Then there are places endowed with historical significance on a grand or intimate scale such as Belvedere auf dem Klausberg in Potsdam, Germany, which is modelled on the Imperial Palace from ancient Rome and the patron angels casting coins towards sinners from a mural in Karlskirche, Vienna. It recalls the aforementioned Beuys and how his claim that “everyone is an artist” might not be the simple egalitarian statement it is often assumed to be; rather he was unleashing whirlwinds. Here is art, Genzken underlines, and what a justifiable mess it is.

Genzken’s mannequins are the most arresting works in the exhibition. Adorned with crash helmets and makeshift masks, they have an altogether different eeriness to those mute figures of Giorgio de Chirico or Oskar Kokoschka. It’s entirely unclear if these figures are slaves to some future fashion (mainly gaudy windbreakers and replica snakeskin), narcissism, consumerism or simply just slaves wound up in masking tape. They seem sentient and mindless at once, victims and threats. A child-sized mannequin in riot police uniform, with a magnifying glass for an eye, adds to the unease. The fact they are cobbled together only serves to remind us that portrayals of the future as sleek are almost always proved inaccurate. The future, we often forget, will be old and thrown together from what surrounds us now. There is no guarantee it will be refined, even in a dystopic sense. The mannequins are not, and neither are those who view them. Junk begets junk.

For all the troubling and political aspects of Genzken’s art, there is deftness that prevents it from becoming leaden or judgmental. There’s an admirable deromanticising impulse evident in works that we are encouraged to walk over, or in focusing in on a sentence so mind-numbingly mundane (“I just realised my phone was not working; it’s fine now”), it feels as if it must have some deeper oblique significance. Genzken exhibits a reflexivity that effectively de-fangs the critic. To find her work absurd and laughable is the point. To find it not that funny and maddening is another point. You get the sense she intended all of this. There may be so many disparate points in so many different directions that perhaps all they really add up to is nothing. And that is, no doubt, another point. Her works are shambolic, muddled, improvised and spontaneous, and thus paradoxically a perfect mirror to a world that is similarly constituted. There is even a certain paradoxical romance in the artist willingly deromanticising, reaching back via Beuys and Fluxus to her forerunner in readymades and the jester’s role, Marcel Duchamp.

Inevitably, in an exhibition full of schisms and improvisations, there are weak points. The replications of aspects of the metropolis in makeshift towers and one-way glass facades fall short of being fully convincing. The stacked plywood and Perspex boxes adorned with Donald Duck figures might well be mischievous, even baffling, in the manner of a secret shrine assembled by an errant child, but they ultimately seem like the seed of an idea rather than the fruition. Just as Duchamp’s The Bride Stripped Bare by Her Bachelors, Even (1915-23) was completed by the cracking of its glass front in transit, so too do these works seem to hold their breath for completion, either by design or cataclysm. Again, it is Genzken’s reflexivity and humour that absorb and distort criticism until it seems beside the point. The fun and mildly menacing provocation throughout her work is evident in her video (with Kai Althoff) The Little Bus Stop [Scaffolding, 2007-2009] (2012). Once early stifling reservations are left behind, it’s hard not to go along with it, even though there is the distinct sense that, as with Caravaggio’s Victorious Cupid (1601-2), which features prominently in a collage here, the laughter is not necessarily with us.

To make art concerned with insignificance, chaos and deceptive appearances is to risk falling prey to accusations of each of these. If modern art, from Pablo Picasso, Chaim Soutine et al, is an attempt to move away from the tyranny of beauty and explore other realms of human experience, then Genzken is a brave and profoundly modern artist. The fact that we retain an attachment to symmetry, order and beauty only adds to the feelings aroused by work that, like Genzken’s, moves boldly to the contrary. She even retains the old attractions herself in the recurring form of roses – wilting, artificial, paint-flecked or otherwise. The art may not be beautiful, entirely coherent or even as revolutionary as some make out but, as this manifold and gradually captivating exhibition suggests, that’s just one aspect in a sea of them. 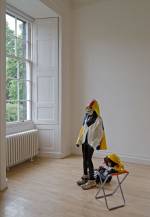 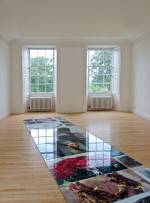 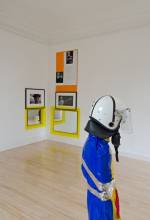