At this time, it is salutary to look back again at the volumes of Studio International and to be reminded of the loss of this artist. Reproduced here is the cover of the March 1986 issue (vol 199, no. 1012), featuring a photograph by Nigel Maudsley. Richard Demarco's current article, a review/reminiscence of Beuys, can also be found on our home page. From his obituary, we re-quote the memory of his first encounter with Beuys:

'Documenta, in the summer of 1968, is forever in my memory encapsulated in one magical moment, still in clear focus in my mind's eye. I see a large exhibition room full of long tables and strange objects which suggested the aftermath of a highly important and dangerous scientific experiment. At a distance of 25 yards an extraordinary man unexpectedly imposed his presence upon the room and everything in it by merely walking through the room, adjusting and examining the objects with precise and dignified movements. He was dressed in a multi-pocketed grey fisherman's waistcoat, a white open-necked shirt, blue jeans. Sitting squarely on his head, half-obscuring his handsome, sallow-complexioned face was a grey fedora hat, incongruously and splendidly formal.'

Richard Demarco goes on to explain again how the relationship developed. The exhibition of works by Beuys is an important milestone both for Tate Modern and for European culture. The German painter Gerhard Richter has recalled, with others, the impact of Beuys. Given all that the exhibition at Tate Modern does to remind us of those times, it is necessary to remind ourselves that it was Richard Demarco who, in 1970, first invited Beuys to Britain, supported by the critic and historian Caroline Tisdall. It is fortunate too, that they are both alive today, since arguably their engagement with Beuys would instead have been seeking to maintain primacy and to maintain historical truth. All were subsequently involved, but Demarco and Tisdall actually got him here. The separate (and excellent) book/catalogue produced by Sean Rainbird (now the Tate curator for the exhibition) entitled Joseph Beuys and the Celtic World, truly takes us to the heart of the matter. Demarco's article, Joseph Beuys at Tate Modern follows. And read on.

Joseph Beuys' 'The Pack' (1969), as exhibited at Tate Modern, must be recognised today as one of the great masterpieces of the 20th century. Twenty-four sledges, resembling a pack of dogs, 'tumble from the back of a VW van. Each sledge carries a survival kit made up of a roll of felt for warmth and protection, a lump of animal fat for energy and sustenance, and a torch for navigation and orientation.' This is also an autobiographical work, alluding to Beuys's own wartime experiences. Looking at the other works, such as 'Fond VII/2' (1967 and 1984), 'Tram Stop' (1976), 'Blackboards'(1972 and 1978), 'Hearth I' (1968 and 1974) and 'Hearth II' (1978-1979), 'The End of the Twentieth Century' (1983-1985), (scattered blocks of basalt) and the vitrines containing small objects of significance to Beuys, one realises how extremely difficult it is to display his works in his absence. Tate Modern have made a valiant effort here and yet it must be admitted that the overall effect is somewhat 'freeze-dried'. 'The Pack' remains unforgettable however, still charged with all the meaning Beuys conveyed to it. It's just that he isn't here, finally, to orchestrate it all together. 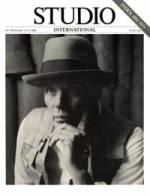