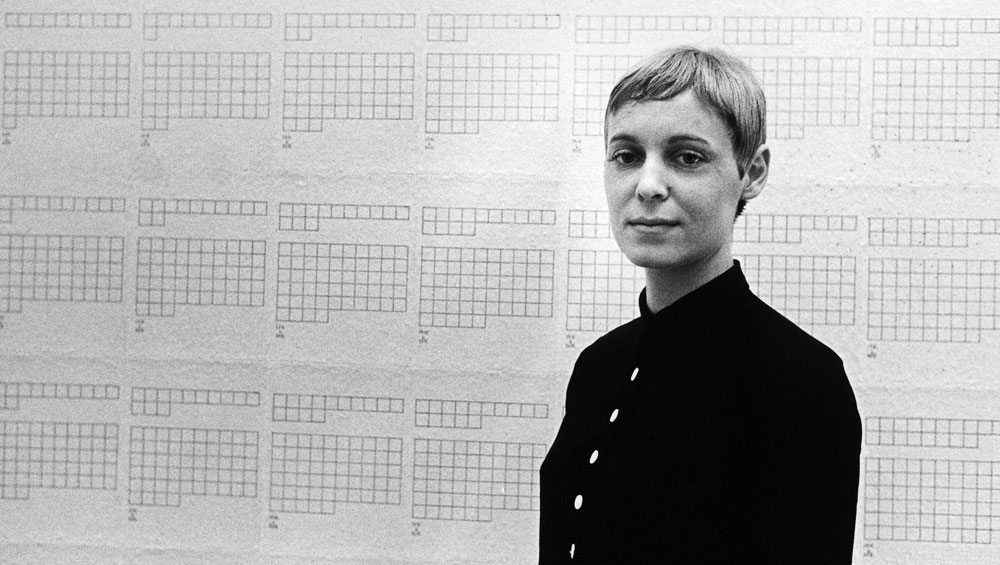 “I will write,” penned Hanne Darboven (1941-2009) in 1971, “as long as there are trees, leaves, sheets, blades.” In this, the last line of a riddling verse, the German conceptual artist put the act of writing at the core of her life and practice, almost as a necessary condition of her being. If she was exaggerating, it was only a little: Darboven’s entire oeuvre is rife with the written. Although her inscriptions vary in mode and form – there are numbers, letters, words, squiggles and musical notation – they remain a constant throughout her career.

Korrespondenzen [Correspondences], an exhibition of Darboven’s work at the Berlin Nationalgalerie’s Hamburger Bahnhof, spotlights this fixation by opening up her ephemeral writings. The Korrespondenzen itself, a collection of more than 1,100 documents from 1967 to 1975, is partially exhibited for the first time, along with 15 pieces of varying scale that have recently been donated to the state collection. The show thus aims to shed new light on Darboven’s intensely cerebral practice. It juxtaposes her finished works with her drawings, letters, postcards and photographs, as well as works from her friends and fellow travellers. In doing so, it aims to plug in an artist whose rigorously systemic outlook can often seem solipsistic. 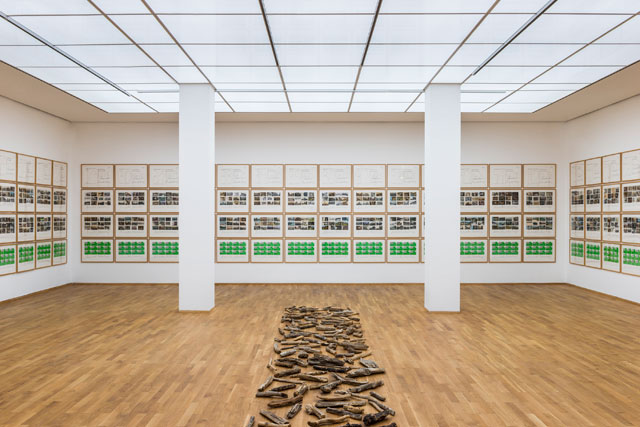 From the mid-70s onwards, much of Darboven’s energy was focused on enormous works composed of framed, identically sized pieces of paper. The prime example in Korrespondenzen, Menschen und Landschaften (1985), comprises 169 such panels, arranged in rows and columns; Hommage à Picasso 1995-2006 (2006), when displayed at the erstwhile Deutsches Guggenheim, encompassed 9,720 poster-sized sheets. Due both to the material scale and intellectual enormity of these works – which often balance textual and photographic references to history, art, architecture, philosophy, literature and popular culture with numerical calculations – they can crowd out the room.

A quick sketch of Darboven’s biography might give the impression of seclusion. She moved to New York in 1966, but, on her father’s death in 1968, she returned to Hamburg and spent the rest of her life on the extensive family estate. But Darboven was no recluse. She frequently travelled for exhibitions, and she maintained lifelong communication with her colleagues, writers and curators, many from those two years in New York. Among them were Sol LeWitt, Carl Andre, Lawrence Weiner, On Kawara, Lucy Lippard and Kasper König. Darboven’s written interactions with these notables form the backbone of the Korrespondenzen, along with letters sent to her mother across their shared residence. 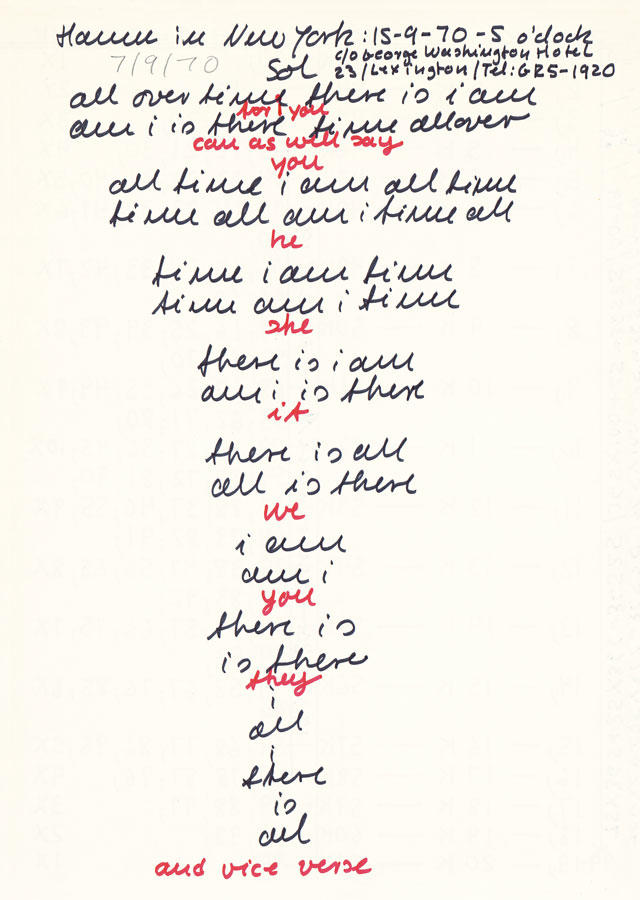 The Korrespondenzen is not a complete chart of Darboven’s interactions, but a personal selection that the artist herself curated in later life. It is presented here as a series of chronologically and topically arranged file folders, with chosen examples removed and displayed around the exhibition galleries. While material from the late 60s abounds with her conversations with other practitioners, papers from the 70s show a shift to the artist’s notes to self: reflecting, perhaps, her move into those large-scale, concentrated projects. It thus perpetuates the idea of an artist influencing, and influenced by, her contemporaries before synthesising this learning into self-directed practice.

The Korrespondenzen shows a fascinating, often playful, interchange between New York and Hamburg. Some of Darboven’s letters resemble Andre’s concrete poetry, scribed into pyramidal shapes that treat the page like a canvas. A 1970 “love letter” between the pair has Andre drawing the outlines of clasping hands above Darboven’s gobbledegook text. In 1969, Andre sent a series of questions – “What is history?”, “What is physic?” – which Darboven answered with sets of digits. A postcard from LeWitt in 1970 contains a series of questions regarding time, a recurring concern in Darboven’s oeuvre. Repetition abounds. When, in 1975, she had an exhibition in Bremerhaven soon after one by Weiner, she hand-copied the typed words on his poster for her own.

While it would simplify Darboven’s career by following the narrative that the Korrespondenzen lay out, it is much easier to see her early work in the New York context than it is to see the later work, before references to history and culture became central to her technique. A pair of geometrical pencil drawings on graph paper, both entitled Konstruktion (1966-7), fits well alongside the American minimalists. The number chart-esque Modell 21 X 21 (1967) syncs with similar works by Andre and Stanley Brouwn, albeit with a greater complexity that combines multiple systems of enumeration.

This complexity is what often sets her apart. Instead of the simple iteration of digits, Darboven’s numbers are often the result of calculations. In a 1968 letter to Darboven, LeWitt uses numbers as a key for the patterning system for his book Four Basic Kinds of Straight Lines (1969). In Darboven’s work of the same period, the numbers themselves are not an explicatory device or visual pattern, but the core of the artwork itself. Although Korrespondenzen draws parallels between Darboven and the American artists, she merges as distinctive.

There are some artists here who fit better than others. Although it is always a pleasure to see early work by Richard Long and Gilbert & George, they lack the clear connection of the New Yorkers to Darboven’s work. Bernd and Hilla Becher’s Gute Hoffnungs Hütte Oberhausen (1969-72) series is composed of 41 photographs of the same industrial building, which might come as a surprise to those familiar with their more commonly seen inventories of discrete structures. On its own terms, it is a marvel. To place it alongside Darboven as another use of archive is a narrow interpretation of all three practitioners. The Bechers’ revisiting of the same spatial site from different angles seems rather different from Darboven’s multi-panel opuses, such as Milieu >80<, Posthum (1987), in which there is a sense of progression with each iteration. You could scramble the order of the Bechers’ works, but Darboven’s are sequential.

On the exhibition’s evidence, it is Kawara who emerges as Darboven’s kindred spirit. One of Darboven’s most common calculations, present in several works here, was to add or multiply the digit in a numerically rendered calendar date: 1/1/01 might thus lead to a value of three, encoding a unit of time within a single figure and granting it a physical location on a piece of paper. Kawara’s Today (1966-2013) paintings record the date of their creation and, through choice of language, the approximate place in which they were created (five of the series appear in Korrespondenzen). Kawara’s use of tourist postcards in the I Got Up (1968-79) series, many of which were sent to Darboven, matches the German artist’s interpolation of the medium in works such as Menschen und Landschaften. Both artists spent much of their career working on extended, repeating sequences. Although there are many disunities – Kawara’s time was lucid and linear, Darboven’s was encoded and elastic – the pair share many notable parallels.

Korrespondenzen lacks the scale to truly explicate Darboven’s canon, but by situating her alongside many of the other greats of conceptual art, it proves her distinctiveness and distinction. With examples from all stages of her career present, it is a fine primer for beginning one’s journey into Darboven’s often-bewildering kingdom. 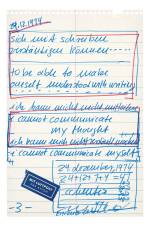 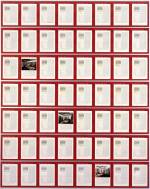