Celebrating moving image from the 1960s to the present day, this exhibition explores experimentation, performance and documentation in film-making 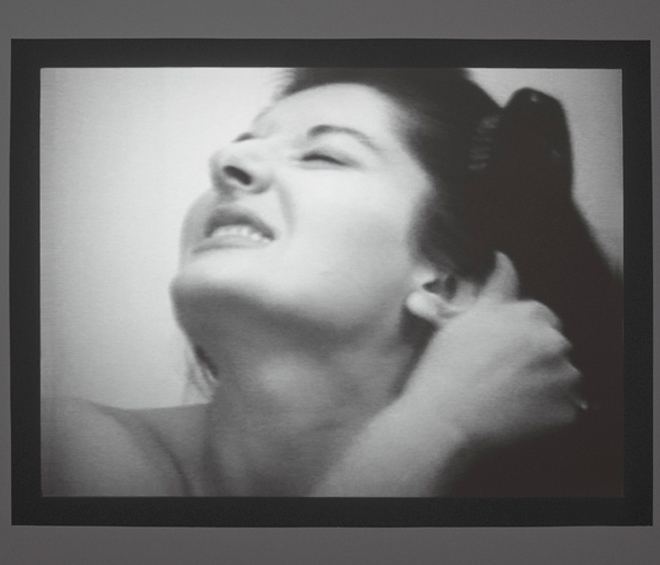 There are three rooms in this exhibition, each one packed full of different worlds conjured by various kinds of performance works. Some, such as Marina Abramović’s Art Must Be beautiful, Artist Must Be beautiful (1975), display the artist’s body in acutely conscious actions; others, such as Ryan Gander’s As It Presents Itself (2008), which uses clay animation to visualise a narrative, distance the audience; and a few, such as Rodney Graham’s Vexation Island (1997), transport the audience into dreamlike scenes.

Aside from the two slippery questions that inhabit the genre of performance – Is the film the work or a documentation of the work? Is the audience part of the work or not part of the work? – a significant issue here must be the fact that this exhibition spans 54 years [the exhibition’s earliest work is from 1962] of making performance and film, from analogue, through digital, to wireless-operated drone. I need not remind anyone older than 40 what this means in terms of practical application and financial outlay. But for those born after 1980, who may not know that editing used to be done with a razor blade and tape, put simply, equipment was a lot heavier and very much more expensive, and the process of turning recorded footage into something viewable involved chemicals, money, better eye sight and many more hours than any aficionado of Final Cut Pro or Premiere Pro software editing might require today.

It’s obvious to note that analogue film-making and digital film-making are two entirely disparate processes, influencing the development and completion of the work in different ways. While this review doesn’t want to dwell on the pros and cons of either, it is worth considering how these different methods have been employed to record live performance, and how advances in recording technology have influenced the nature of performance itself. Christian Jankowski’s poignantly funny The Hunt (1992) follows the artist through a supermarket as he shoots arrows from a bow into the items he needs to eat: a bag of sugar, a carton of milk, a leg of ham, all pierced with a full-length arrow and delivered to the checkout, arrows still impaled. And all recorded by one non-intrusive, steady (possibly stabilised) hand-held camera. In The Nightwatch (2004), Francis Alÿs uses the National Portrait Gallery security cameras to record a fox as it explores the gallery space, and Sean Snyder’s Cloud Sediment (Gstaad), 2015-16, films a drone filming and also employs the film made by the drone. All three examples, by using in turn the stabiliser, security cameras and the drone, are performance pieces of today’s technology; they could not have been made in the 60s.

Viewing Abramović’s, Art Must Be Beautiful, Artist Must Be Beautiful (1975), a work made more than 40 years ago, the blurred monochrome is immediately recognisable as an analogue recording, holding us spellbound with the beautifully nostalgic Hollywoodesque close up. But Abramović’s actions are uncomfortable to watch. She brushes her hair repeatedly while speaking the words “Art must be beautiful. Artist must be beautiful.” And soon her action becomes so rough that she appears to be tearing the brush through her hair, grimacing as she speaks, the words now turned from an observation into a mantra of self-harm, uncomfortably reminding us that we, the audience, are culpable for her anguish – as we watch her, we give her the platform to perform this work. Here is one of those slippery questions about performance art – what exactly is the position of the audience in the work? Critic and writer Roselee Goldberg, in her text concerning Live Art, addresses the influences and development of the practice that is performance art, the “avant avant garde”.1 Goldberg comments that each creative movement, “futurist, constructivist, dadaist, surrealist”, used the method of performance to explore ideas, and citing surrealist theorist André Breton’s work Surrealism and Painting, Goldberg recalls how Breton proclaims that the ultimate surrealist “acte gratuit” would be to fire a revolver at random into a crowd on the street. Without “a crowd” there would be no acte gratuit in this imagined act. Similarly, writer-director and performance artist Laurie Carlos explains the vital role of the other in her essay on live performance. Carlos tells us that current critical theorists believe that the presence of the other (the audience witnessing the performance), “is essential to the completion of the work”,2 and that the other’s “live immediate response to artwork” is also a performance. Carlos realises that the other’s role as witness / responder is actually in itself a crucial and “performing” component of the live art process.

The audience as essential component of a work is highlighted in Dan Graham’s Performer / Audience / Mirror (1977) (this exhibition has borrowed its title from Graham’s work), in which Graham, speaking out loud to the audience, describes himself, and also describes how he sees and interprets the audience as they sit and watch him standing in front of a mirror. This awareness of the action of performance in the moment of performing is also addressed through a voiceover in Gander’s As It Presents Itself, with the voice of actor Richard Briers in a one-way conversation (asking us, the audience) what performance is and what it is not. The clay animation figures represent the comedian Spike Milligan, curator Matthew Higgs, the artist’s mother, Mrs Frances Gander, and the Lumière brothers (dressed in brown tweed suits, they could be mistaken for the performance duo Gilbert and George). The experience of watching As It Presents Itself reminded me of the habit of reading street signs out loud. Drawn in to the performance, I felt compelled to answer the series of questions posed by the voiceover, if for nothing else than to quiet the voice. Santiago Sierra, in his work The Trap, Matucana 100, Santiago de Chile, December 2007 (2007), places an audience at the centre of his performance, thus literally bringing into play Carlos’s concept that the other’s role as witness / responder is actually in itself a crucial and “performing” component of the live art process. Sierra’s work also subverts the position of the audience – by doubling (one in the work and one –us – watching the work). Persuading officials from various Chilean professions to participate in The Trap, Sierra guided them down a long corridor so that, before they realised what was happening, they found themselves on a stage facing an audience of 186 Peruvian workers. Suddenly the object of these people’s attention, and with nowhere to hide from their gaze, the officials backed away, only to be redirected to the street. While we watch the audience watching the performer, we repeat the audience’s position. Even though that audience and that individual in that work don’t feel our gaze, it is true to say that the presence of any camera holds in it the potential gaze of another; at a present or future time, in the same or another place. And so the camera itself could be perceived as an audience. In this way, the complicated and sometimes convoluted conceptual process that attends contemporary performance plays out in ever-increasing reflections. Performance theorist Peggy Phelan, in her text Unmarked: The Politics of Performance, is particularly interested in the present time of performance in relation to the re-marking (documentation) of the live act. Emphasising the fleeting essence inherent within live performance, Phelan states: “Performance is the art form which most fully understands the generative possibilities of disappearance.”3 Phelan realises that performance flies past the audience, “poised for ever at the threshold of the present”, never to exist in the same form or place again, “performance enacts the productive appeal of the non-reproductive”. The live experience cannot be caught, or exactly revisited, and this tantalises our desire to hold on to and repeat events and physical experiences.

Tantalising is Graham’s Vexation Island, a richly coloured, desert island film with wind-blown palm trees, a blue-winged, gold-breasted parrot, and an unconscious red-coated soldier lying prone on the sand. Graham’s dreamlike scene is so luscious it might tempt a Robinson Crusoe into the frame – but not when I was looking.

Lastly, I would like to mention the Swedish-born duo Nathalie Djurberg and Hans Berg, whose work Worship (2016) resonates with different works from various disciplines, bringing performance up to the present day, conceptually and technologically, and also in the way in which it reflects the fluidity of contemporary creative practice.

Speaking about her practice with Berg, Djurberg says: “I see myself definitely not as a painter, but I see myself as a sculptor … and I wouldn’t say animator because it’s just a form, but in animation I can contain everything – I can contain sculpture, painting, the telling of a story – and I think that is really what interests me. I like the thing with art that you don’t really have to narrow things down, you don’t have to categorise yourself too harshly.”4

Including Worship in this exhibition evidences how open to variety in form, material and content performance has now become. Fine art no longer needs to “narrow things down” into a “harsh category”, and this gives both the artist and the audience the possibility of an ever-more enriched, and often surprising, experience.