Don't Cross the Bridge Before You Get to the River is a large-scale project by the Belgian artist Francis Alÿs. Shot in the Strait of Gibraltar, which separates Africa and Europe, the video installation shows on one screen a line of children carrying a toy boat made out of a shoe, walking from Europe to Morocco, while on a second screen a group of children leave Africa heading towards Spain. They would metaphorically meet at an imaginary line on the horizon. The project, created in 2008, will include documentary footage, paintings, drawings, sculptures and photographs. It is now on display at the Museum of Contemporary Art Tokyo, as the second part of the Francis Alÿs exhibition there. 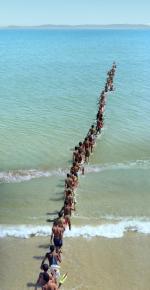