Marina Abramovic: The Artist Is Present

An Audience with The Pope of Performance Art

Performance Art is perhaps the most ephemeral of the arts, as transitory as the human body itself. Some question that it is art at all. Does it belong in the theatre or in the art museum? The self-proclaimed “Grandmother of Performance Art”, Marina Abramović challenges conventional wisdom in “The Artist is Present”, a mammoth retrospective of about 50 works of dubious importance at the Museum of Modern Art, New York from March 14 through May 31. It is the first career survey the institution has ever mounted to recognise a significant performance artist. It has become an enormous media event that has both charmed and baffled spectators much as Cristo’s The Gates did in Central Park in 2003. 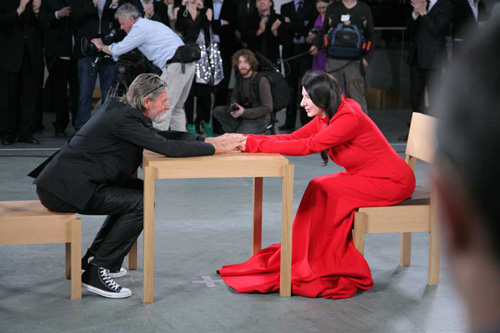 The Serbian artist is a pioneer in this particular, often excruciating exercise in Postmodernism. In testing physical and mental limits, her aesthetic has embraced self-mutilation and humiliation in conceptual and performance pieces. It is not exactly masochism as she does not appear to be enjoying the pain she puts her poor body through. She just endures it. She began her career with a series of solo pieces. She passed out due to the lack of oxygen while burning her hair and nails in Rhythm 5 (1973), her response to the ritualisation of the Communist five point star; a doctor in the audience had to shut down the show. In Rhythm O (1974), she stood impassively and invited the audience to utilise objects of pleasure and pain, from a rose to a gun and a bullet placed on the table before her. During the six hours, the spectators grew increasingly aggressive: they cut her clothes, someone cut her neck and drank her blood, one woman put the bullet in the gun to see if Abramović would resist her pulling the trigger. When the time was up and the artist was walking away, naked, bleeding and crying, everyone else ran out the door.

Between 1976 and 1988, Abramović often engaged in public displays of mutual verbal and physical abuse with her partner in crime, the West German performance artist and her then lover Uwe Laysiepen known professionally as “Ulay”. Yelling at each other, slapping each other in the face, banging into one another as they walked and then ran, slamming continually into pillars in a gallery, often in the nude. These examples of Body Art were fraught with menace, the constant threat of danger. In perhaps their most notorious performance piece, Rest Energy (1988), as in Rhythm O, Abramović was not in complete control of the outcome: Ulay pointed an arrow at her heart while she held the taut bow, both staring into each other eyes, she trusting him implicitly not to do anything rash.

Visitors to The Joan and Preston Robert Tisch Gallery on the sixth floor of MoMA are bombarded with these videos, sound pieces, photographs, installations and live performances. They are spared Rhythm 10 (1973), in which the artist spread her left hand on a surface and quickly stabbed the space between her fingers with a variety of kitchen knives. A video of a reenactment can be found on YouTube as an excerpt from the documentary The Star (1999). One can hear her gasp when she misses. It is agonising to watch more than a few seconds.

Since the collapse of Communist Yugoslavia, Abramović has expressed herself more emotionally by confronting head on the atrocities of the Bosnian Civil War. The two central MoMA installations from this period are perhaps the most obviously political and theatrical of the works on display. Her triptych Balkan Baroque received the Gold Lion Award at the Venice Biennale 1997. Flanked by video portraits or her father and mother before a pile of cow bones and dressed as a doctor, she describes on film how rats kill one another in the Balkans and ends in a silly, energetic Hungarian folk dance on removing her white smock and waving a red handkerchief. More provocative is Balkan Erotic Epic (2005), her collage of videos of supposed traditional rituals that show Abramović violently hammering a skull against her bare upper torso, the scrubbing of human bones, peasant women running through a cloudburst and lifting up their skirts to catch the rain between their legs, and nude men humping the landscape.

There are also five live “re-performances” of earlier stunts at MoMA. The artist has personally overseen the 42 performers who alternate in shifts of as short as an hour and a quarter. MoMA conducted a casting call and Abramović rigorously instructed those chosen at her place in the Hudson Valley so they could convincingly step in for her while she herself sits and sits and sits in the atrium below. Her replacements must endure, however briefly, what Abramović has over the years. Should they be called artists or models, actors or reenactors? Some of her more Puritanical colleagues denounce these reenactments as betrayals of the necessary temporal nature of Performance Art itself. It is all about the Here and Now and can never be duplicated.

The artist has requested from the outset, “Walk in mindfully, remain silent and no photographs”. All the bare bodies on display in this venerable institution have proven to be a big draw for both tourist and native. Two of the live acts involve fully clothed participants: In the minimal Point of Contact (1977), they stand motionless opposite each other, each sticking out a finger that never touches the other's; and in Relation in Time (1977), their hair is firmly tied together at the back to indicate their bond. In Luminosity (1997), a naked woman is suspended in the middle of the wall on a bicycle seat with her arms outspread that suggests a public crucifixion. Inspired by a traditional exercise of Tibetan monks, Nude with a Skeleton (2005) is just that: a nude with a skeleton. The video of Abramović’s original performance shows her breathing rhythmically beneath it; but when I went to MoMA, the bare young woman replacing her seemed to be fast asleep or perhaps rigor mortis had just set in.

For Imponderabilia from 1977, two naked people (originally Abramović and Ulay) stand opposite each other in a tight passageway. The four alternating couples at MoMA do not take up the sole egress of the gallery, however, impressively large, rotund men and women insist on forcing themselves through the narrow space. The police closed the original performance in Amsterdam so the artist is lucky Mayor Giuliani is no longer in office. While a few MoMA patrons have been less than excited to have to brush pass one or two limp penises, others have ignored the "Don't Touch the Artists" warning to make inappropriate comments and even grope the performers.  One of the participants has complained of the numerable erections that have pressed against the back of his hand held by his side. Museum goers know not to fondle the Picassos so why cannot they keep their paws off these performers?

The central live performance is also called "The Artist is Present" in which Abramović sits immobile like Whistler's mother in the centre of the vast Marron Atrium on the second floor. It is the zenith of exhibitionism both literally and figuratively. Abramović experimented with a similar setup as recorded in the video Nightsea Crossing (1981–1987) in which she and Ulay sat motionless opposite each other in various locations. The seemingly interminable banality of this performance is more an act of endurance than a purely artistic statement. Abramović vowed to sit silent for 600 hours during regular museum hours but not at night. The day I was there she had gone up to 716 hours and 30 minutes and was still counting. It requires relentless will power and stamina from the 63-year-old artist.

Patrons of all ages are invited to sit opposite her for long as they wish. When they get bored or tired or uncomfortable, they just stand up and leave. They line up for hours for the chance for an audience with the Present Pope of Performance Art. Others just stand or sit around and observe. As she sits in the heart of the museum, Abramović can be observed from every other floor above by gazing over the railing.  When a gentleman asked exactly what she wanted him to do as he took his place, Abramović told him merely, “Sit with me”. There has been only one variable in this setup: Dressed like a Balkan Disney princess, she changes the colour of her gown from month to month – red for March, blue for April, white for May.
It has become chic to sit in the presence of the artist. Among the ubiquitous celebrities who have shown up over the last three months have been Isabella Rossellini, Lou Reed, Rufus Wainwright, Christiane Amanpour and Sharon Stone. Some come in silly getups, but nothing seems to phase Abramović – not even her bladder. (There has been considerable speculation on her urinary habits during this gruelling ordeal.) Apparently the only time she has broken down during the entire retrospective was when Ulay himself took the chair opposite her unannounced. Tears welled in her eyes and after a few minutes she took his hands. Usually it is the others who weep.

Is it intriguing? Yes. Is it tedious? Yes. Her imagery is often terse and commonplace, the symbolism obvious. There is an overriding glibness in Postmodern Art that never rises to the profound. It’s clever, but is it art? Irony can only go just so far. At times one wonders if the viewer is one of the artist’s jokes rather than in on it.  Abramović is hardly the only self-absorbed person in this City of Egos. The endurance of the sitters vary from a few minutes to the entire day much to the annoyance of others waiting relentlessly for their crack at Abramović. Most average between 5 and 20 minutes.  All of them have been photographed by Marco Anelli and posted on MoMa's Flickr feed.

Some claim to have had undergone mystical experiences. Others just shrug. But on the whole they have demonstrated infinite respect and patience for the “performance”. Few talked, no babies in strollers congested the space, no cell phones went off, no one demanded autographs when I visited The Church of Modern Art.  Perhaps the only other exhibit in recent MoMA memory at all comparable in public reverence was the “Waterlilies” installation where visitors could sit for hours in contemplation of artistic genius at the museum’s relatively short-lived shrine to Monet. Abramović is no Monet. Anyone tired of her public display can run off to the superb exhibits of Picasso prints and Cartier-Breson photographs elsewhere in the building.

“The Artist is Present” is reminiscent of what Armenian-born director Reuben Mamoulian suggested to Greta Garbo when they were making the final scene of Queen Christina (1933). She has abdicated her throne and departing Sweden for exile; her lover has just been murdered and she is setting sail with the body aboard. Mamoulian told her to stare ahead blankly into space from the prow of the ship. She was not to speak or think of a thing. The audience would fill in her thoughts, he told her. It remains one of the longest and most famous closeups in cinema history. Abramović is no Garbo, but “The Artist is Present” has more of a theatrical than a purely artistic aura clinging to it. Like cinema, it will leave a record and then pass. MoMA’s hoopla for this show has been enormous. The New York Times has even visited her elegantly furnished star-shaped house in Malden Bridge, New York. Hype can only go so far. So too narcisism. The artist is present and will be gone on Memorial Day. 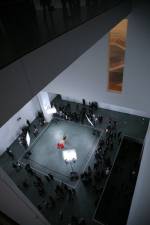 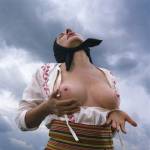 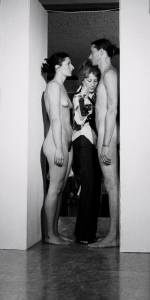 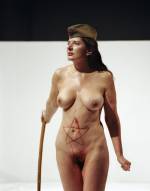