A festival for our time: dOCUMENTA 13

A festival for our time: dOCUMENTA 13

Faces press against the glass wall of a rotunda in one of the world’s oldest museums: the Neo-Classical Fridericianum. This is the heart of Documenta (13) in Kassel: outside the “Brain”, the nerve centre of this serious contemporary art festival, where its many threads of thought converge into one. It is where visitors stop, look and think about what strange historical objects and artefacts mean. And where just a few steps away you can feel the cool breeze of British artist Ryan Gander’s invisible artwork I Need Some Meaning I Can Memorise (The Invisible Pull), (2012) against your face inside the modern white cube of the gallery space. This marks a turning point, a refreshing change in light of the gravitas of the museum.

Such moments lie at the centre of Documenta, widely known as “the museum of 100 days”, that takes place once every five years. The festival stems from teacher, artist and designer Arnold Bode’s 1955 intervention into a local flower show in the empty shell of the Fridericianum, which rehabilitated Entartete Kunst (Degenerate Art) by artists such as Picasso and Kirchner, artists once denigrated by the Nazis. Following the totalitarian trauma of World War II, the event heralded a time of recovery and reflection. Today its founding spirit endures in the silent pre-war views of old Kassel recaptured in Tacita Dean’s painted postcards c/o Jolyon (2012). Alongside is a 2011 landscape by Afghan artist Mohammad Yusuf Asefi, who saved 80 paintings portraying animals and humans (by covering these figures in watercolour) in the National Gallery of Kabul from destruction by the Taliban.

From its humble beginning, Documenta (13) has grown to encompass a cluster of venues across Kassel and beyond. This year it not only fills traditional sites of the Documenta Halle and Neue Galerie, but enters spaces devoted to natural science – the Orangerie and Ottoneum – and visits the former Benedictine monastery of Breitenau outside the city. The green expanse of the Baroque Karlsaue Park is dotted with a poetic constellation of statues in Pierre Huyghe’s Untilled (2012) and the old train station echoes with haunting stories in Janet Cardiff and George Bures Miller’s “physical cinema”. Beautiful white chalk drawings of Afghan mountains by Tacita Dean cover the walls of a one-time banking hall and a memorable performance entitled This Variation (2012) by Tino Seghal resonates in a pitch-black room in the back of a Huguenot House. There are even conceptual offshoots of Documenta in Kabul, Alexandra–Cairo and Banff, which together set into play a quartet of phenomenal situations in which artists and thinkers act consciously in the present.

For today Documenta is a truly global art festival that bravely confronts serious concerns. In Kassel around 200 artists and artists’ collectives from 50 countries question what it means to live in the early 21st century, where the emphasis on economic growth has led to a widening gap between rich and poor; and society and nature being subjugated to the vagaries of an unprecedented financial crisis. The participants look at how the current age of uncertainty brings connectivity and disconnectivity among distant places and spaces across the globe. And in doing so, they create moments or turning points when the world simply changes. As artistic director Carolyn Christov-Bakargiev sums up the event in a lucid essay: “It is rather the space of relations between people and things, a place of transition and transit between places and in places, a political space where the polis is not limited by human agency only, a holding space, a committed space, a vulnerable space, a precarious yet cared-for space.”1

Back in the holding space of the “Brain”, one can sense this shifting cultural dialogue in the fragile beauty of Bactrian Princesses with inlays of lapis lazuli, dating back to between the late third and early second millennia BC in western Central Asia (now Turkmenistan, Uzbekistan and northern Afghanistan). A moment of solipsistic meditation absorbs the viewer at the sight of the original vases that Giorgio Morandi painted in his studio during the war and the metronome created by Man Ray with the eye of his lover Lee Miller. A photograph of Vogue journalist Lee Miller bathing in Hitler’s tub with her army boots on the floor of his former apartment frames a turning point of mid-20th century history. And an excerpt of a video of the uprisings at Tahrir Square in Cairo on 25 January 2011, shot by Egyptian artist Ahmed Basiony, documents a political transition of more recent times.

The weight of history is ever present in the meandering threads of Documenta, as seen in the sculpture of Arte Povera star Guiseppe Penone in the rotunda space: a river stone and a copy of the object is made in Carrara marble, entitled Essere fiume 6 (1998). This neatly connects to the Italian artist’s magnificent work Idee di pietra (2003/2008/2010) that soars above the Karlsaue Park, a stroll away from the Neo-Classical museum: a bronze cast of a tree supporting a large boulder, which draws people together, dressed in multi-coloured raincoats amid the grey skies of a precipitous day. Amazingly, the tree appears to defy gravity and arrest the fall of the stone in an eternal moment to the consternation of onlookers. The extraordinary sculpture articulates nature’s enduring capacity for revival and renewal, and thereby offers hope so lacking from the dark passages of recent European history.

The idea of collective memory emerges in the uncanny world that opens up when reality and fiction blur in Canadian artists Janet Cardiff and George Bures Miller’s latest piece of “physical cinema” Alter Bahnhof Video Walk (2012). As one puts on headphones and looks at an iPhone screen, the participating viewers are invited to listen to the artists’ narrative while walking around the edges of the city’s former main central station, the Haupbahnhof. “Memories are like a different form of travelling; it’s like filling a suitcase that we pull behind us and we open and close when we need to,” whispers Cardiff. As the film unfolds, a ballerina can be seen to take an elegiac turn and a flurry of snowflakes fall in the light of a summer’s day, before hearing the marching of footsteps as ghostly characters gather to tell you traumatic stories of the war. Finally, one follows the artist to platform 13, where once the Jews left for their onward journey. And there one stops for a moment.

Over at the Neue Galerie, another passage of history is entered in Geoffrey Farmer’s Leaves of Grass (2012). This theatrical installation features hundreds of shadow puppets composed of images of leading figures of the day, cut out from issues of the American news journal Life, dating from five decades (1935–85) when millions of readers turned to the magazine for their views of the world. In the Documenta Halle, German artist Thomas Bayrle has also fabricated a large-scale installation, this time in the form of Airplane (1982–83). With a wingspan that stretches across an entire wall, this aircraft is formed of a collage of thousands of photographs that encapsulate the dream of flying, which enables one to cover the corners of the globe in just one lifetime. Impressive in scope, Airplane alludes to the complex layers of connectivity (and disconnectivity) that now compose the fabric of our globalised world.

This year’s edition of Documenta (13) not only succeeds in presenting fresh perspectives on pivotal moments in history, but also in opening up new directions for the future. A case in point is the Time/Bank installation in a house in Karlsaue Park by e-flux: Julieta Aranda and Anton Vidokle. Based on the Marxian theory of labour value, time banking is a system of reciprocal service exchange using units of time as currency. Modelled on existing time banks and alternative currencies such as “Notgeld”, notes that emerged in Germany in 1923 after hyperinflation, the multi-media Time/Bank (2009–ongoing) includes several branches and a website: e-flux.com/timebank. Theinstallation in Kassel is a participatory work showing films and providing a library of books to browse such as David Graeber’s Debt: The First 5000 Years and Félix Guattari’s The Three Ecologies. With many commentators saying the Eurozone is stuck at five minutes to midnight, political leaders would do well to follow the artists’ maxim: “Time is the most valuable natural resource of the world.”

Of course, stepping into the Time/Bank is just one of the sustainable ways in which the viewer can consciously participate in the international dialogue about global concerns facing society and nature in our present era of uncertainty. And there are many moments where one enters into this contemporary art festival, while bearing in mind its founding spirit of recovery and reflection against a backdrop of crisis. Yet the work’s point of enquiry illustrates how Carolyn Christov-Bakargiev has succeeded in creating an outstandingly thought-provoking and relevant edition of Documenta for our time.

1. An essay by Carolyn Christov-Bakargiev, ‘The dance was very frenetic, lively, rattling, clanging, rolling, contorted and lasted for a long time.’ p.15. 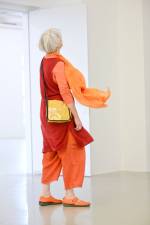 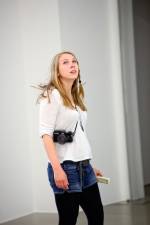 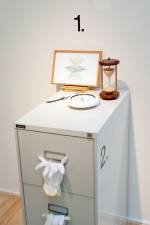