The Armory Show: A Personal View

The Armory Show: A Personal View

Art fairs are not places conducive to the contemplation of works of art, nor do they necessarily claim to be. Rather, they are networking events whose main audience consists of art collectors, artists, art publications, and of course, the galleries themselves. They are in essence only tangentially related to the content of the works of art whose cloying abundance supposedly constitutes the central attraction.

As a mere visitor, not interested in buying, selling or promoting art or related products, art fairs are not for me. I have heard people say that they are a good way to keep a finger on the pulse of recent developments in contemporary art. Perhaps this is true for some, but for this viewer, the main attraction (if there is one) is not the art works themselves, but rather the spectacle of the human and institutional apparatus that surrounds them.

The Armory Show is comprised of two separate spaces, Pier 92, devoted to galleries that deal mostly in modern art and Pier 94, devoted to galleries that deal in contemporary art. Pier 94, the larger of the two spaces, is entered at street level and it is there that visitors drift to first. It requires some time and effort to get one’s bearings in the vast T-shaped space, and I spent some time wandering around confusedly. The smaller space at Pier 92 offered slight respite from the confusion. It was what one might expect of a modern art section at this type of event, full of serious people selling serious art. My review will focus primarily on the contemporary selection laid out at Pier 94.

Despite the overwhelmingly rapid and tight succession of paintings, installation pieces, prints and video art throughout the show, there was a stated effort to highlight certain pieces and help the viewer focus their severely strained attention: we are told in the fair’s catalogue that “this year’s Armory Show highlights the work of Theaster Gates, represented by the Kavi Gupta gallery in Chicago”. I was indeed pleased to discover the work of Gates whose website refers to him as an “artist and cultural planner”: but this discovery did not occur until I opened the Armory Show’s catalogue after leaving the fair and saw the 18 pages devoted to his work. The fact that I did not notice Gates’ commissioned contribution as I was walking through the show might be an indication that his work was not as effectively highlighted as the fair’s organisers might have hoped. Or perhaps it was simply my antiquated and inadequate mode of looking that prohibited me from seeing what was before me as I felt that I was drowning in an infinite sea of images and information. I must admit that at some point during my visit I wandered the corridors unable to look at a single piece of art, fascinated as I was by the succession of names of cities: New York, Tokyo, Paris, Vienna, Dublin, Berlin, Lima, Los Angeles, Munich, Stockholm, Beijing, Seoul, Moscow, Istanbul. Such rapid hopping from continent to continent is enough to occupy my mind.

In any case, and even if it was through the catalogue, I was pleased to discover the work of Gates, an artist from Chicago who stages interventions in the urban landscape using different media including sculpture and performance. Mayor Michael Bloomberg notes in his brief catalogue entry that Gates’ “dual role as artist and urban planner directly addresses many of the issues that we experience on a daily basis as New Yorkers, and we’re proud to welcome his dynamic voice”. Perhaps the Mayor was seeking to align the fair with less overtly commercial events in the art world through this nod at site-specificity; perhaps also there is some relationship between the contents of the fair and the surrounding city. However, I doubt that making the show relevant to the average New Yorker featured among the priorities of the show’s organisers.

A more obvious highlight was the Armory Show’s “focus section”, which was devoted to the Nordic art world, curated by Jacob Fabricius, director of the Malmö Konsthall, and included works from Denmark, Norway, Sweden, Finland, and Iceland. The show within a show allowed for more focused attention, but the logic that prevailed was nonetheless that of consumption, not contemplation: a number of poster reproductions of artists’ work were laid out for viewers to take with them, which created the fun and frenetic dynamic that goes with events that offer free “stuff”. Of the works themselves, I have little recollection: there were too many people milling around hoping to grab a poster or two.

There seemed to be little that structured the event as a whole. References to place abounded, as indicated by the Mayor of New York’s feeble nod at site-specificity, the emphasis on the origins of the galleries gathered together and juxtaposed in the space to emphasize the event’s international nature, the regional orientation of the “focus section”. Yet it was the lack of contextualization that I found jarring. Place in this case is not a parameter of contextualization, but something quite different. Paris, Beijing and Lima are no longer cities, vast complex structures with their own specific histories, populations, and challenges. Rather, in this context, they are cast as signs that space and history no longer matter, empty indicators of place without substance. I for one cannot begin to glean meaning or even to appreciate the aesthetic qualities of images in this context. For this reason, I prefer to wait to see those works of art exhibited at the Armory Show until the time I have a chance to visit them in Stockholm or Istanbul or Vienna, if I get the chance. For the time being, here in New York, I will simply attempt to enjoy the condensed sociological spectacle offered up by the event, which is as far as anyone can go. 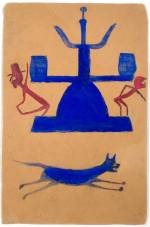 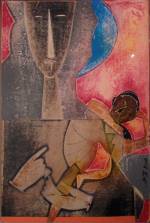 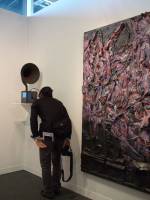 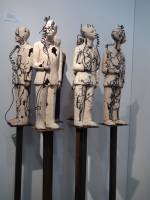 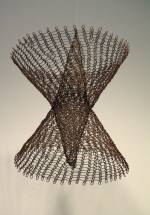 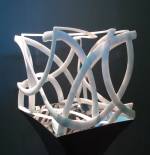 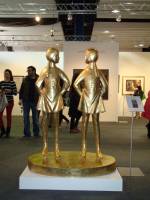 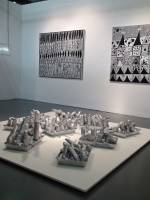 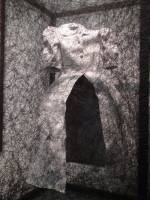