In a mesmerising and disquieting exhibition, Tate Liverpool showcases the prophetic work of video artist Gretchen Bender, who railed against the rise of consumerism and the political appropriation of mass media

It is a mark of the age we live in that much art seems to have lost the transgressive power it was once accused of possessing. Our daily saturation of images plays a part, as does a sense of fatigue following a century and a half of artistic provocation. In the midst of the barbarisms of the real, the fictional no longer has the same capacity to shock. What use is there for Guernicain an age of Guernicas? To engage with an audience inoculated against and suspicious of direct confrontation, the more astute, radically minded artists opt for the Trojan horse approach. One such example is James Rosenquist’s F-111 (1964-65), which appears initially as a frivolous even decadent pop art folly, but gradually reveals itself to be a clever and damning indictment of a hegemony that has commodified everything, even youth and death. And yet the work appears to be celebratory and was embraced by an art-world given to commodification as well as the very hegemony it opposed.

The video art of Gretchen Bender (1951-2004), though vastly different, occupies a similar intriguing paradoxical space. Bender railed against our brave new world of consumerism while appearing to embrace it. Certainly she employed its means, cutting up found footage of advertisements, war and corporate sponsorship, and intensifying their frequency, speed and volume until what was subtle and pernicious was exposed as brash and vulgar assaults on the senses and the conscience. The message is obvious – this is coming, if it is not already here. In the hands of a lesser artist, it is entirely conceivable the result would have been ham-fisted and dogmatic, but in Bender’s hands it is profound and improbably beautiful. It transfixes. For all her manipulation of the tools of visual spectacle, she transcends where others would be absorbed happily into the beast.

When she deliberately moves into the visceral horror of Untitled (Landscape, Computer Graphics, Death Squad), 1987, it commands our undivided attention for a different reason. Mixing images of officially sanctioned murder with seemingly meaningless pixels, she raises a multitude of uncomfortable questions. Here, her radicalism is most obvious and fierce but so is her skill in editing. She takes what is already there, what our civilisation has given us in terms of goods and crimes, and fragments them and juxtaposes them until the uncanny and the obscenity of it all become apparent again.

Motion is key to Bender’s work. Film-makers may sculpt in light, but they do so, too, in time. Bender recognised this and expanded on the cyclopean linear view by having her videos break out of one screen into many. Her central work here, Total Recall (1987), is a powerful, politically charged masterpiece. It is a complex barrage of signs and methods of manipulation and seduction (even tacitly referring to the co-opting of art for big business, by featuring the Saul Bass-designed AT&T telecommunications logo, which she compared to the Death Star in the Star Wars trilogy). While Rosenquist used mirroring methods (bold primary-coloured billboards) to describe and critique his world, Bender chose a language her new world would understand best. The messages conveyed ring equally true.

In Total Recall, we view iconography of late capitalism rapidly cascading across multiple stacked monitors. It is scathing, thrilling and exquisite, like a bizarre electronic version of the murmuration of starlings or ripples across water. It is all the more remarkable because Bender seems to have predicted the information and imagery overload of the internet before its rise. While inevitably dated in terms of graphics, it is still a genuinely stunning work, choreographed to perfection, stuck in time and yet timeless. Above all, it is hypnotic to watch, which is precisely the point. Aldous Huxley realised that tyranny would truly prevail not when we were beaten into it, but when we demanded it, when we sought it out as pleasure and self-aggrandisement. By combining the seduction of hi-tech communications technology with a resultant hypnotic docility, Bender was a prophet. Hers is a hypnosis that, paradoxically, might jar us awake for a moment.

Dying absurdly young, at the age of 53 in 2004, Bender had lived to see telecommunications invade, or rather be welcomed into, every aspect of our lives, and could see the emerging consequences long before then. What her work hints at is that the concerns we have over privacy, infantile attention spans and rampant narcissism might not even be the aspects to worry most about. These might only be the surface. What she would have made of the world of today we can only guess at. What she would have made from the world of today is tantalising. “It’s hard to make art through the use of guerrilla tactics,” she once stated, “where the only constant to the style you develop is the necessity to change it.” There’s plenty here to suggest that she would have continued to be the artist as Proteus – continually moving, continually changing, yet with that crucial perceptive gaze and unique talent intact.

“I think of the media as a cannibalistic river, a flow or current that absorbs everything,” Bender once said. She knew the deluge would absorb her too (“I’m trying to infiltrate and mimic the mainstream media,” she told Cindy Sherman in BOMB #18, 1987), but this is very different from Bender completely absorbing it. Her work would remain acutely hers and acutely critical, whether she was pushing against the flow or with it; directing videos for New Order (Bizarre Love Triangle, 1986), Babes in Toyland (Bruise Violet, 1987) and Megadeth (Peace Sells … But Who’s Buying?, 1986), or in stylish and barbed juxtapositions in screenprint, the potential mass-production of which is intentional (and harks back to her Marxist banner-printing days), such as her Untitled (The Pleasure is Back) sequence (1982). Concluding her interview with Sherman, Bender said: “I would like to see more artists fighting against that comfort, against that haven. We need to stay alert to the political implications of the conceptual evolutions of our newer technologies.” In the endless flow of information, it is still to be seen whether we sink or swim. With the work of the greatly missed Bender, showcased memorably by Tate Liverpool, we have something invaluable to cling to. 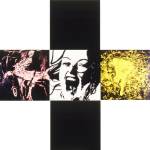 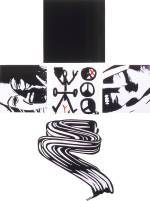