The 2008 Whitney Biennial is smaller and quieter than in previous years, despite its extension to the Armory Building. Just over 80 works sparsely fill the three floors of the impressive museum. Everyday materials such as plywood stand out amid the cardboard-like partitions of the gallery. The show has been widely criticised on the international stage for its general failure to engage its audience. Many have found the art too dry, its content lacking the necessary substance to justify the heavyweight academic theory of its curators. And yet there are some intriguing pockets of activity that demand further attention.

For an exhibition that promises to capture 'Where American Art Stands Today', the serious ambience is peculiarly suited to the current recession. The anxiety that pervades is the result of pressing issues that Americans face: the controversial Iraq War, the ecological crisis and rising government suppression of civil liberties, as well as the conspicuous accumulation of wealth to the exclusion of the majority - which masks the crumbling social fabric. This response can be categorised by 'lessness', to borrow from Samuel Beckett. Artists are working in diverse modes that point to 'constriction, sustainability, nonmonumentality, antispectacle and ephemerality', writes the show's young curator Henriette Huldisch. Her colleague Shamim M Momin notes that there is a particular emphasis on spatiotemporal modes of practice, often through installation, sculpture and vernacular architecture, whereby artists are slowing down and confronting the hard realities of economic progress.

Many of the works are the result of communal projects that foster universal connections across diverse regions of the United States, yet are invested with a local specificity. The outstanding documentary by Spike Lee, 'When the Levees Broke: A Requiem in Four Acts' (2006), looks at the widespread outcry against the government's inadequate response to Hurricane Katrina. Through interviews with scientists, activists and residents, news reports and photographs, it argues that the devastation wrought in New Orleans was as much a result of human neglect as it was due to environmental disaster: racial prejudice and class bias left the poor, black local population stranded in a drowning city, regardless of its rich musical legacy. Javier Téllez's captivating film of six blind people touching an elephant in the setting of Brooklyn's disused McCarren Park swimming pool - a Depression-era landscape that exudes the religiosity of an archaic temple - is a contemporary version of an Indian parable charting the vagaries of perception, which unites its participants through sensory exploration. As they meander around the elephant in quiet fascination and record their tactile impressions of the creature, they invite the viewer to pause in contemplation as they too experience the cyclical moment. 'It feels like a tyre', says one. The familiarity of America's gas-guzzling culture removes him from the wonder of nature.

Elsewhere, artists chart territories scarred by industrial damage and excess through works constructed from found and recycled objects. After moving from New York to California, Charles Long was struck by the rich source of meaning embedded in the flotsam of the polluted section of the Los Angeles River on his doorstep. He scavenged for rubbish and sediment, combined this with papier-mâché and plaster, before dripping the mixture across steel armatures to mimic the patterns of excreta left by blue herons along the concrete river embankment. The result is a poetic body of work reminiscent of Giacometti's pale, emaciated figures and, perhaps, a contemporary visual equivalent of the fragments shored against the ruins of TS Eliot's 'The Wasteland'. To borrow from the exhibition catalogue: 'Long sees his tall, desiccated ghosts as harbingers of death that paradoxically assert the resilience of life through their inclusion of every imaginable type of refuse'. The enduring beauty of a spectrum of detritus rises to the surface of installations by Californian artist Jedediah Caesar, who encases box-loads of functional studio objects - wood scraps, bottles, cups, sponges and socks - in blocks of translucent resin to make works such as 'Helium Brick aka Summer Snow' (2006). The minimalist module suspends the chaotic matter in space and time, encouraging the spectator to pause in reflection upon the transient nature of consumer culture amid the ebb and flow of the constant stream of visitors.

One of the pervasive currents in the show is the appropriation of modernism to throw light on the vast accumulation of wealth, witnessed by today's inflated art prices. Sherrie Levine, who has worked extensively on the authenticity of art, translates Alfred Stieglitz's analogue cloud images in his Equivalents series of the 1920s and 30s into eighteen abstract, pixellated photographic prints in 'After Stieglitz' (2007). The artist reclaims the modern photographer's images for herself, to create a Chinese-box effect - a world within a world of endless duplication, which is comparable to the self-reflexive mirroring culture that underpins the drive for material gain. Levine's abstract mosaics sustain parallels with the anthropomorphic paintings of Joe Bradley - translations of people and animals into pure blocks of primary hues on vinyl surfaces. Here, the artist presents a new interpretation of the heroic, colour field painting by the likes of Ellsworth Kelly that pervaded in the 1960s as a voice of US democracy. However, rather than crystallising their subject's repersonalisation of art, they playfully evoke the universal feel of ancient totemic sculptures. Meanwhile, elder statesman John Baldessari fuses painting, photography and sculpture in surrealist interventions. He juxtaposes fragmented body parts and everyday objects to create witty combinations, such as 'Arms & Legs (Specif. Elbows & Knees), Etc.: Elbow (Blue) with Desk' (2007), in which a blue elbow hovers above still life of a desk with stationery, drawing attention to the strangeness of the post-industrial office culture. Amanda Ross-Ho makes socio-political assemblages from decorative household objects pinned into the gallery walls, challenging the masculine domain of high art with simple, feminine craft. Alice Könitz creates faux-modern furniture from readily available materials like wood, Plexiglas and metallic paper, which pull away from the draw of luxurious fashions, and recall the Bauhaus utopian vision of design as a means of facilitating social change. They are among the intriguing range of works that illustrate the capacity of artists to go behind the trappings of the American dream and look at alternative versions of subjectivity, which may yield greater value in uncertain times. 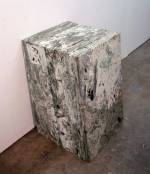 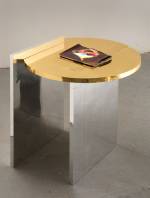 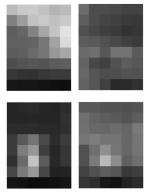 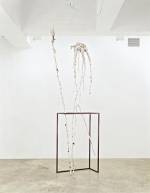 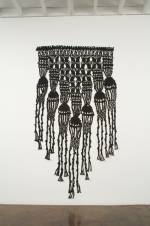