As Stella is the first living artist to be shown at the Whitney Museum’s new downtown space, the exhibition is by definition a mission statement

Why not Jasper Johns, some have questioned, for such a marking event? On the surface, it’s a no-brainer. Frank, as even strangers address him, although born in Massachusetts and a graduate of Princeton, is a local boy. He lives and works in Manhattan, manifests all the big-city qualities – plain-speaking, stubborn and feisty – and is beloved here. He was appealingly wild back when (and has only recently sold his Ferrari) and, despite the sort of meteoric rise that has sent lighter heads into the stratosphere of branded cool, he has remained unassuming. That he burst on the scene with his four Black Paintings at the age of 23, he still credits less to their breakout minimalism than to the curator having had to scramble for one more artist to round off her two successful exhibitions – Fourteen American Artists and Fifteen American Artists – with a third. The career-launching Sixteen American Artists placed a nail in the coffin of abstract expressionism, and Stella in the canon of minimalism – a generations-bending movement sprung from his mantra: “You See What You See.” It mattered that the Whitney owns a deep body of his work (though, oddly, only three are included here), and that, with sales at auction topping $6m (£3.9m) – the work is still relevant. Most important, Stella himself is still working, still showing (at Paul Kasmin, Marianne Boesky and Dominique Levy) and still thinking. It helped, too, that he had bonded with the museum’s director, Adam Weinberg, who co-curated the show (with Michael Auping, chief curator of Fort Worth’s Museum of Modern Art), over their involvement, as alumnus and director, with the Addison Gallery of American Art at Phillips Academy, Andover.

No wonder, then, that the Whitney, undaunted by Stella’s previous two retrospectives at the Museum of Modern Art (MoMA) chose to give him a third, though not without pushback from the artist, who had wanted to show only his later work until persuaded otherwise. Annabelle Selldorf, of Selldorf Architects, was recruited for the installation, a choice that becomes more evident as Stella’s work grows industrial. She and Weinberg collude on keeping you out of your comfort zone. In the Whitney style of old, they open the elevator doors on a stunner – Das Erdbeben in Chile (No 3 1999) – but then, alas, scramble the chronological progression dictated by the old Whitney’s square rooms to toss you around between canvas and steel; flat and sculptural; monochrome and polychrome; acrylic and 3D.

It’s a remarkable effort, monumental and energising, a colossal presentation of work on loan from museums and collections that may not be shown again, but I found the installation disturbing. A retrospective, after all, is a survey, a passage through thought, time and process. Perhaps Stella, who had a big say, wanted to mess with our brains in order to open our eyes to the cerebral revelations that shook his. Just as you are relishing your immersion in the saturated, symmetrical hand-painted monochromes that sacrificed abstract expressionism to “post-painterly abstraction”, as Clement Greenberg christened minimalism, you get an ocular jolt from a 70s colour field Irregular Polygon peeking through a gap in the walls. As you are trying to focus in on the gestural, deceptively simple, broad-brushed geometry that placed Stella in the pantheon, you are yanked to the complicated metaphor of a busy, splattered collage. Contemplating the pioneering pinstriped, shaped, copper painted canvases that the still young-young artist premiered with Leo Castelli, your peripheral vision catches the whipped metal planes from the 80s Moby Dick series. Thankfully, each transition is masterfully represented; The Marriage of Reason and Squalor, Creede l, Moultonville ll and The Blanket are standouts. Nonetheless, the disparity in form and talent is jarring and complicated. Because the wall captions, though fully descriptive of each new phase, don’t explain the evolution of Stella’s ideas, you move among his abruptly demarcated styles as between different artists, rather than following a single artist’s succession of thoughts.

The most abrupt transition is to the roiling and (literally) off-the-wall painted aluminium composites, held up only by metal armature that is, itself, sculpture. With these, the dynamic reverses: as you try to make sense of their glittered convolutions and squiggled fluorescence (the arcane titles are no help), the intervening glimpses of striped canvases are calming. They don’t, however, serve the narrative. Stella’s evolution from patterned brushstrokes to twisted steel is never addressed. Should a metallic tube be seen as a three-dimensional stripe? Is the intention of the stitching to create the same demarcation as had tape? The artist’s boundless energy and will to keep pushing envelopes are not enough to raise these exercises in metal to the same level as the early paintings. It is not clear that the spaces created by bringing work off the wall hold new ideas. And it is not at all certain that sprayed auto paint resonates to the same pitch as did hand-applied oil paint. Difficult, too, to make out the influences that Stella had credited for taking his work in a new direction. Although, for example, Gobba, zoppa e collotorto, from the Cones and Pillars series (1985), directly references the impact of Caravaggio on his resolve to create and radiate outward an expanding pictorial space, it illustrates “cones”, “posts” and “outward” – but not Caravaggio.

It is helpful to have read up on the intellectual twists and turns that moved the work forward. On the blurred-stripe paintings (East Broadway and Astoria): “All of the painterly intensity was in the service of an organised geometry.” On attempts to imbue his work with deep meaning: “My main interest has been to make what is properly called decorative painting.” On abstract art: “Abstraction is not as abstract as it appears.” And its death: “In the end, you can’t be an abstract artist if you’re born 30 years too late.” To critics of his decision to pull art out from the wall: Q – “Do you still call these paintings?” A – “Yes, They are, in fact, paintings.” Q – “Where do you stand on purity? A – “Wherever I happen to be.”

Nothing, though, mitigates the challenge of transiting from the mind-spaces fronting Stella’s three-decade evolution of heated investigation and strong technique to the jumble of cold works in the final two rooms that wrestle old tropes out of steel, plastic and computers. Avowedly “maximalist”, they convey turbulence on steroids; scrapheaps blown into knots, masses fractured into particles, and unreadable compilations meant, I suspect, to look free and hallucinatory. Instead, backed against pristine views of the free-flowing Hudson River, they look messy and bolted. It has not been that long since Alice Aycock’s wind-tossed masterpieces graced Park Avenue, and their majestic clarity still haunts.

That the totality of Stella’s late works comes off as strangled and confused is, I suspect, because the artist is no longer present. Digitally composed and handed over to a team to paint and assemble, they have the faux energy of a funfair built from a kit. For all their exuberance, they remain concept. It was a struggle to give these shiny avatars their due before returning to the pinstriped haven of all I hold Stella, and that, deeply ironically, Stella holds passé. Excepting the very few drawings and maquettes, and the very small, tabled, “circus” sculptures of 2009 that riff, albeit inadvertently, on the beloved Calder circus installation that the Whitney keeps on permanent display, the feeling I left with was of Stella not at home. The sheer tonnage of sculptures that borrow none of the emotional weight of the colossi of Memnon, together with the 3D-printed, spray-painted hard resin aggregates of shapes recycled from previous works, give the impression of an artist gone awol. What you don’t see is what you see.

The fault lies partly in the uniform lighting; partly in Selldorf’s choppy and somewhat clunky installation, which misuses the famed 15,000 sq ft of open space to rob the sculptural work of adequate breathing room; and to a larger extent on too great an emphasis on Stella’s enduring vigour, which, given that the later works were farmed out, rings hollow and does grave disservice to the impregnable place of his early work in a meaningful history of art. Detracting too, though not anyone’s fault, is the venue. The strength of the new Whitney is its industrial personality, but its rugged elements, so deliberately in keeping with the grit of the meatpacking district, are not kind to all art. Distressingly, Stella’s monumental steel tubing rising to meet Renzo Piano’s cantilevered steel ceiling presents like a clash of the titans and, given its breadth, the architecture wins out.

The larger problem is the failure of this show to live up to its title. What is a retrospective, before all? By definition it should survey an arc, if not lifetime, of an artist’s production. To this end it must supply autobiography (the work), biography (the installation) and resonance (a whole that reveals more than its parts). To succeed, it must perform on all three levels: to triumph it must move the needle and the heart. Ideally, you enter with some idea of the artist, and exit with a larger idea, compounded by an emotion ignited by work grouped to make you experience both the artist and the world in a new way. Important as this exhibition is, by this definition it is not a retrospective, certainly not one of a life pushing 80. Speaking to the wisdom of a museum director wearing two hats, Weinberg doubled up on work from the 25 series he and Auping selected from the roughly 50 estimated to be in existence; completely omitted the others, and kept to a minimum the winning drawings and maquettes that best illustrate Stella’s process – a decision of curatorship, not availability, since the Whitney owns a rich trove of both.

It does not help either that running concurrently, at Stella’s second home, MoMA, is an exhibition of another painter derailed into sculpture, whose radical beauty has lifted even further, if that were possible, that artist’s reputation. No one who has seen Picasso Sculpture will remain unbowed, unmoved or unchanged. 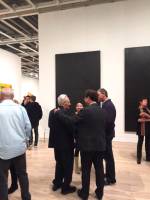 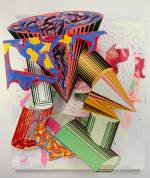 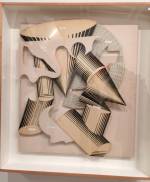 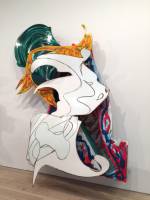 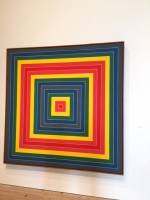 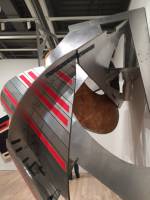