Tadaaki Kuwayama: ‘Here is only the art itself’

Tadaaki Kuwayama: ‘Here is only the art itself’

Japanese-born artist Tadaaki Kuwayama recounts his refusal to dictate how spectators should view his work, his visual dialogue with Frank Stella, and the desire to void his art of meaning

Born in Nagoya in 1932, Tadaaki Kuwayama rejected the doctrinaire strictures of the Japanese nihonga  tradition, preferring to move to New York in 1958 where he encountered an art scene on the cusp of a new wave of currents such as conceptual art, minimalism and pop. With an aversion to abstract expressionism, Kuwayama produced distilled, richly coloured, discreetly reflective fields of paint without trace of manual intervention, the focus of the current exhibition at the Mayor Gallery in London.

Intent on making the relationship with the surrounding space as important as the works themselves, Kuwayama increasingly favoured serial arrangements, sometimes adopting anodised metal, as a means of shunning the existential drama and connotations of creativity associated with the individual painting. Above all, the pristine uniformity and quiet, otherworldly theatre of these works are testament to Kuwayama’s resolve to avoid received notions of composition, colour, narrative, hierarchy and individuality. 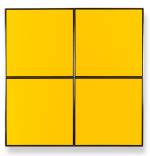 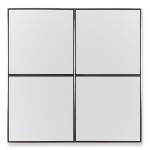 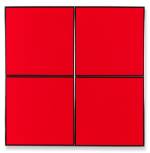