There is a prevailing misconception that artistic modernism somehow emanated from the major capitals of Europe. Certainly, cities such as Paris and Berlin were magnets for artists from the supposed hinterlands, but modernism was a wildly eclectic series of perceptions and representations of the world. It took place chiefly in the minds of its participants, wherever they were located. It was more a question of psychology than geography.

Perched at the edge of the continental shelf, Ireland has been portrayed as a place that was largely immune to the charms of modernism. Though it spawned many major cultural figures of the era, the traditional path of Irish artists was seemingly one of internal neglect, derision and exile. As with so many other countries, we are finally redressing this oversimplification. The clarity and abundance of the Patrick Scott (1921-2014) retrospective at the Irish Museum of Modern Art is a superlative rejoinder to this view. It is also a fitting, rewarding tribute to a major talent.

Unsurprisingly coming from an architecture graduate, Scott’s work often revolved around order. Even though his career spanned 75 years and a wealth of mediums, there is a remarkable unity to his work, as if it arrived fully formed. There are thematic evolutions down the years, but Scott found his voice early and sustained it with a calm, bold clarity. While his Gold Paintings are deliberate manifestations of his fascination with Japanese Buddhism, it seems evident from the balance, minimalism and mystery of his earliest work that he was drawn to Zen long before he declared it. His painting Sea Fish (c1942) is reminiscent of the simple but otherworldly resonances of Paul Klee or Kazimir Malevich. Renvyle (1943) similarly operates on a poetic level where the most basic silhouettes of gate, sea and ship become something beyond the earthly; so, too, the locomotive reflection of Killiney (1946). At many stages, Scott edged towards abstraction, but as evidenced in Evening Landscape (1944), he remained vitally anchored in the discernibly real. He may have seen the appeal of the semi-mystic qualities of Abstract Expressionism, but perhaps realised that a complete break with nature led almost always to solipsism. The natural forms may come in anomalous disguises (as in the stunning, disorientating Under the Pier, 1959), but they are still there, as a shared link to triangulate between the artist and the viewer.

The closest Scott came to disrupting his unfailing sense of harmony was with his Devices series. Created in an age when the nuclear obliteration of the human race was a distinct possibility, Scott’s paintings were notably detached works, all the more eerie because of their circuitous route to protest. The term “terrible beauty” has been much overused since Yeats coined it, but there is something both disturbing and alluring about Scott’s renderings of atomic explosions. It is not simply the realisation that the aesthetics of the sublime exist in the apocalyptic; this was known and explored aeons before physicists split the atom. It is the strange divinity involved; the idea that we are uncovering the secrets of the universe and we are seeing too much in the process. It constitutes a modern day Promethean tragedy. Scott’s paintings are charged through their careful indistinctness. Purple Device (1963) appears to be based on Harold Edgerton’s rapatronic photographs of H-bomb fireballs, but it could equally be the formation of a new planet. Bronze Device (1964) insinuates the sun and the spilling of blood, as well as a nuclear airburst. All life, we are reminded, comes from the fission involved, and all life may well go out that way. Genesis is wedded irrevocably to Revelation.

Even in his cataclysmic omens, Scott maintained a meditative tone. It began in his early landscape photos, circa 1940, which pre-empted the “purity” of photographers such as Hiroshi Sugimoto. This was accentuated in Scott’s later Gold works, where the action of the Devices pieces gives way to stillness. His works began to take directly oriental forms, physically (Chinese Landscape, 1986 and Zen Garden, Japan, 1987), stylistically (his Series E drawings) and philosophically (his Meditation series), with his visits to the Far East. What raises the works above decorative yogic trappings is not only Scott’s skill, but his eye for the strangeness of forms we accept without question. He locates geometry within the organic, identifying the shapes that make up the most primordial of things, even humans as in Girl Carrying Grasses (1958). In his almost optic art Rosc series, the double meaning of the title in Irish as either “poetry of vision” or “a battle cry’” gives rise to symbols that could be mouths or eyes. By altering the colour and composition of inherently familiar objects such as trees and the sun, as in Flemish Garden (1944), he makes them seem as odd as they really are. We are reminded in his studies of the moon (Meditation Painting 28, 2006, for example) of how peculiar it is to have a reflective stone satellite orbiting our world. In Bog Sun (1959), we might see the vast distorted star at our solar system’s centre as both sacred and malevolent, the way people might have in the distant past or, recalling the unspoken warning of Devices, in times to come. It is clear that Scott’s central strength was the ability to see the ancient with modern eyes or, perhaps more interestingly, the modern with ancient eyes.

Image Space Light presents Scott as diverse an artist as his plentiful talents allowed and necessity dictated. From his grounding in architecture, there is always the semblance of design in his art, most obviously in the scaffolding vertices of Building Operations, Sundown (1956). This was tempered with more bohemian impulses channelled via his involvement with the White Stag Group in the 1940s. There are unmistakable traces of the natural world, even in his distinctly manmade projects. The Busáras central bus station in Dublin, which he helped to design, contains a canopy of waves on its modernist facade. His coloured branding of Iarnród Éireann trains was inspired by his cat’s coat. His minimalist design for the Dublin International Theatre Festival (1960) evokes both fireworks and splintered sunlight through a canopy. The extensive variety of commissions Scott took on speak well of his unmistakable yet adaptable style, from Christmas cards to tapestries to set design. All of them seemed connected to the (Celtic) past and the elemental, as if even in the most innocuous of designs, Scott found the essence of things and restored the possibility of souls to soulless objects. Image Space Light proves what a loss it was to Irish and international art when Scott died earlier this year. It also proves what a joy it was to have had him for so many years, uncovering vividly the unfamiliar and the timeless all around us. 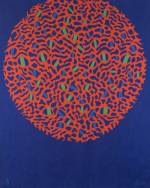 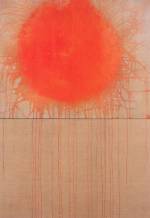 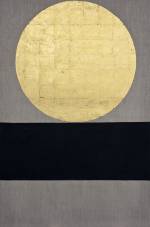 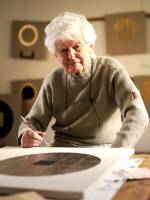