Face to Face - The Daros Collections

Face to Face - The Daros Collections

'Face to Face' presents the two facets, or faces, of the Daros Collections, finding similarities between works by artists from the USA and Europe and works by Latin American artists.

Some of the parallels suggested by the exhibition make direct associations between one work and another. On a broader scale, when both collections are gathered together, links between them surface, providing a unique perspective on the major international art trends over a significant period of time. In fact, 'Face to Face' suggests intersections beyond typical historical and geographic contexts. Curated by Hans-Michael Herzog, artistic director of the Daros Collections and curator and director of Daros-Latinamerica, the show encompasses more than fifty works (installations, paintings, sculptures and videos, among other media) made by artists from more than ten countries, but mainly Latin America.

The foundations for the Daros Collections - Daros Services located in Switzerland - were laid in 1995, when Swiss entrepreneur and philanthropist Stephan Schmidheiny decided to make his private art collection available to the public. By promoting exhibitions and an education programme, Daros Services sparked a dialogue between the art in Schmidheiny's collection (predominately from the post-war period and contemporary art from the USA and Europe) and a mainstream audience. Years later, Schmidheiny developed an interest in Latin American art; in 2000 he established the Daros-Latinamerica Collection. Today, the Daros Collections consist of 280 works by artists from the USA and Europe and one thousand works by one hundred Latin American artists. Highlighting works of art from the past two decades, Daros-Latinamerica emphasises some eminent artists from the Sixties and Seventies (for example, Brazilians Hélio Oiticica and Antonio Dias and the Argentine Víctor Grippo), a period of flourishing experimentation in many Latin American countries under dictatorship regimes. 'Face to Face - Part I' represents the first time that both collections have been shown together. Opening on 15 March, Part II narrows the viewing perspective, with particular attention paid to painted expressions.

The Daros Exhibitions building in Zürich opened to the public in 2001. The space, built in 1897 and completely re-designed, consists of three floors with the original brick work and a new concrete structure. Upon entering the show, visitors first encountered a large piece of plywood (around 2 x 9 metres) with traces of images of skateboards made in 2004 by Puerto Rican artist Chemi Rosado Seijo. At first glance, the nature of the marks is not clear, but when viewers look closer they will see skid marks made by the skateboards. These free movements are imprinted by the rapidly moving skater's body. Even without knowing the title, viewers may note a reference to the energetic spontaneity of abstract expressionism. To make the connection explicit, 'Number 11' (1951), a large painting by Jackson Pollock, was placed on the wall next to it. A legend meant to be read after seeing the two works in relation reveals that Seijo piece, titled 'To Pollock', is a witty tribute to an artist now considered to be the greatest American artist of the abstract expressionism movement. 'To Pollock' is part of Seijo's series 'La historia sobre ruedas (History on Wheels)'.

Another Puerto Rican artist, Charles Juhász-Alvarado, made a direct allusion to masters of 20th-century art with his 'Duchamp in check' (1995), which was placed at the entrance of the show. This work consists of an outfitted chessboard; rather than bishops, rooks and queens, there are miniatures of Marcel Duchamp's ready-mades composing the game. Alluding to the powerful international auction house, 'Sotheby's' (2000) by Brazilian artist Nelson Leirner comes next in the show. The elements of this work are actually two copies of a contemporary art catalogue issued by Sotheby's, enclosed in plexiglass boxes. The catalogue covers reproduce Duchamp's readymade 'Fountain' (1917). To one cover image, Leirner attached a tap, connected to a plastic tube, to the Duchamp readymade. As these initial exhibited works satirically play with art history, their links to established European and American art is easy to grasp. One might expect that this is the impression that would carry through 'Face to Face', but that was not the case.

More typical was the dynamic dialogue produced when works by American Bruce Nauman and Brazilian Cildo Meireles were brought together. 'Pair of Reversed Heads' (1990) by Nauman is composed of two wax heads, one red and one yellow, suspended from a beam approximately two metres above the floor. Meireles's 'Reason/Madness' (1977) consists of two sections made of bamboo arches. The 'perimeter' lines of the two semicircles are two metal chains connected by a padlock. A chain with a key hangs from the middle of each arch. In the first arch, the key does not meet the padlock because the metal chain is not long enough; in the second bamboo arch, the chain is too long and extends beyond the padlock. Considering how these artists have approached the idea of balance initiated a conversation about the human condition and state of consciousness, always precarious yet always seeking equilibrium. Nauman has produced many works featuring doubled heads, but in this particular piece the heads are incomplete (hollow). The emptiness of one model could be seen simultaneously with the complete face of the other. The effect produced by this simultaneous viewing was striking. In his work, Meireles created a similar effect, but instead of using a body part to talk about the human condition (as he often does), he chose here ordinary objects from daily life as symbols of humanity. Conceptually, the contrast of the works points to shifting perceptions and altered states of mind, as well as to the difficulty of perceiving these changes on a personal level. In the past, Nauman orchestrated his alterations with video installations that provoked sensorial experiences. Meireles's projects have had a more political grounding and date from a period when the artist aimed to draw attention to acts of torture performed on political prisoners by a dictatorship.

Ties between many of the artists in both collections stem from their concern with verbal language. For years, Argentine artist Jorge Macchi collected murder reports clipped from newspapers. He cut up the articles line by line, made a drawing with the sentences and placed them on a wall as one large horizontal text. All of the clippings contained the phrase 'Cuerpos sin vida (lifeless bodies)', a phrase he gave as title to the work (2003). Repeats of the phrase touch each other in the middle of the collage and form a nucleus of expanding lines that vary in measure depending on the number of words in each article. Macchi has described the phrases as a bridge connecting different stories from real life, which readers absorb and then forget when they turn a page and read another story.

Macchi's work implies that a single voice, expressed in an impersonal medium (newspaper), is often lost and forgotten. The American conceptual artist Barbara Kruger's untitled black and white photograph (1981) was set close to Macchi's meditation on the ephemeral. In Kruger's image, a mysterious man makes a gesture with his index finger on his mouth as if to request silence. The text 'Your comfort is my silence' labels the work. Kruger implies here that by acquiesing to such a request, one gives up the power of expression and silences voices that should be heard, particularly female voices. By placing Macchi and Kruger together in this way, each work was amplified, their messages echoing and resonating with each other.

The next dialogue came from the positioning of works by Cuban artist Tonel and German artist Sigmar Polke. 'Dibujo con letras y números (Drawing with letters and numbers)' by Tonel from 1989 is a sheet of paper from an accountant's book on which Tonel wrote words and figures, playing with the logic that composes visual signs. There is a sequence of numeric symbols corresponding to the number of letters each word contains. For example, the word tres (three) translates to a sequence of numbers from one to four. Polke also used a simple piece of paper to work with visual language. In the exhibited work, an atypical untitled drawing from 1969, the artist made numeric equations with incorrect results. More typically, Polke's images are figurative and expressionistic. With their own arbitrary, meaningless systems, Tonel and Polke question the meaning of the systems of communication created with numbers and letters.

The Daros Collections include one of the largest private collections of Andy Warhol's paintings and prints. As a fitting finale to the first part of 'Face to Face', the last room was dedicated to the American artist with 'Dance Diagram (6)' (1962) and '210 Coca-Cola Bottles' (1962), among other images. As the central figure of pop art, Warhol continues to influence artists throughout the world. But in Latin America, Warhol's iconic paintings acquired particular meanings. Consumer culture is more radically criticised, and this could been seen in 'Coca-Cola Bottle filled with a Coca-Cola bottle' (1973) by the Uruguayan Luis Camnitzer and 'Insertions into ideological circuits: Coca-Cola Project' (1970) by Cildo Meireles. In his work, the Brazilian Meireles referenced how Coca-Cola was sold in Brazil during the Seventies when Coca-Cola bottles were made of glass. After drinking a Coca-Cola, a person had to return the empty bottle to the merchant, who then returned the bottle to the factory. Meireles altered the labels on the bottles: he printed messages, with legends like 'Yankees go home' and 'Molotov Cocktail' which could only be observed after the refilled bottles were reintroduced into the market. The message on each bottle is, thus, a work of art sent directly to the public. Everyone who bought a Coca-Cola in Brazil at the time became part of an unexpected audience for Meireles's art. The audience for the first part of “Face to Face” had a chance to view some of these bottles as part of the exhibit.

With 'Dance Diagram', Argentine artist Guillermo Kuitca created the parody 'Naked Tango (After Warhol)', dated 2004, a photogravure in which Warhol's footprints are depicted in smooth Argentine dance movements. Another Argentine, Leandro Erlich, produced the installation 'Piedras (Stones)' - a box with little stones placed on the ground - in 2003. An electronic mechanism draws a path on the ground with a succession of footprints. The noise and the marks on the stones assert the presence of an unseen entity that walks away from a wall and then back towards the wall. Although a bridge between Warhol and Kuitca relates to cultural aspects (in this case, dance), another relationship, concerning steps, movements and paths, formed when Warhol and Kuitca were considered with relation to Erlich's work.

By bringing together such a diverse group of artists with varying perspectives and concerns, 'Face to Face-Part I' attempted to give the Daros Collections an international context by raising practice issues and questions concerning cultural differences and identity. True to curator Herzog's intent, 'Face to Face - Part I' did much to help make the universality of art in all its manifestations apparent. No doubt, 'Face to Face - Part II' will provide more proof. 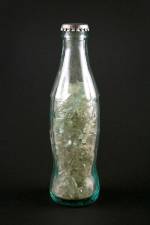 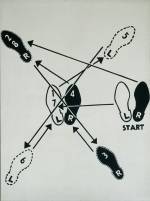 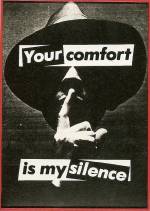 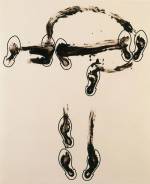