The Lichtenstein retrospective at the Hayward Gallery establishes an interesting timescale in terms of the appreciation and significance of Lichtenstein's work and the development of a critical apparatus to understand it. It reinforces the fact that Pop Art was of profound significance in cultural terms but difficult to assess by studying individual artists. Lichtenstein poses numerous problems and contradictions in critical terms, as the literature and reviews reveal. 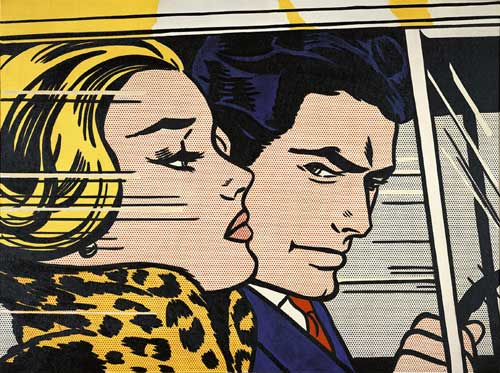 In 1963, Roy Lichtenstein was 40. He was producing a series of seminal works that took comic-strip images and reinvented them as large paintings. In doing so he established himself in an unassailable position in the Pop Art movement and in the American art world. Five years later in January 1968 to coincide with the retrospective of Lichtenstein at the Tate Gallery, Studio International published a major, even seminal article by Lawrence Alloway, together with and preceded by one by Richard Hamilton. Hamilton was quick to examine, in Lichtenstein's case, the issue of transformation, the rejection of the idea of composition, replaced by, 'the conflict of flatness and illusory space' that 'reveals a superficial concern with style. It is a curious fact that these obsessions, a baroque love of decoration and a delight in illusion, often go together. In any essentially mannerist art it is in the extremity of the stance that the glory lies. Lichtenstein is marvellously extreme.'1

In 1974, Frank Whitford expressed the view that Lichtenstein's comic book paintings had been largely misunderstood. 'To explain the qualities of Lichtenstein's paintings by contrasting them with their [comic-book] sources in the light of conventional aesthetics misses the point: Lichtenstein had uncovered an underestimated, misunderstood and largely overlooked fund of exciting imagery and had introduced it to a wider public by celebrating it in an artistic context.'2

A further thirty years on, the Hayward Gallery retrospective (first shown at Louisiana Museum of Modern Art, Denmark) has prompted an almost unanimous slating of Lichtenstein's work, in terms of significance and quality. 'There are worse things than being a minor artist. Perhaps this exhibition is clumsily chosen, but it makes him seem an infinitely slighter figure than his fame implies … there are some paintings here that make you seriously wonder if Lichtenstein deserves to be remembered even as a second-rank American painter.'3

Lichtenstein's comic-strip paintings became an essential aspect of the iconography of the 1960s. The mythology that evolved, and on which the Pop artists drew, contained contradictory aspects of the society that promised economic and technological prosperity. The assassination of John F. Kennedy in 1963 and the outbreak of the Vietnam War revealed serious flaws in the American dream. Race riots and the personal tragedy of celebrity figures such as Marilyn Monroe and Elvis Presley brought into question the economic superiority of America. Andy Warhol revealed the banality of an obsession with money in multiple images of American dollar notes and in bottles of Coca-Cola®, the crass symbol of the American dream. Vulnerability and destruction were explored by Lichtenstein through images that hitherto belonged to popular culture.

The relationship between the media, the individual and society as a whole are addressed by Lichtenstein's larger than life comic-strip images. Pop Art sought to counter the hypnotic power of the media by using the imagery and technique in a new context - that of a gallery or museum.

Pop Art reacted to the phenomenon of depersonalisation in mass society with styles which were equally impersonal, with pictures which had an equally objectivising effect. The media had changed the relationship between individual subjectivity and mass consciousness, and Pop Art therefore also wished to redefine the role of individuality in art.4

Sentimentality in the media is amplified by the scale of Lichtenstein who presented banal stereotypical roles such as 'Drowning Girl', 1963. Sexual battles are here fought using the image of a staged melodramatic love scene; more traditional battles using fighter planes and the full machinery of war were created in works such as 'As I Opened Fire', 1964. In both, Lichtenstein echoes feminist issues and the preoccupation with war and destruction that were both significant issues in America during the 1960s - even if Lichtenstein himself claimed that he was concerned only with images, not themes. The themes, however, assume greater importance from an historical perspective. In terms of a retrospective, this is perhaps the most significant flaw in Lichtenstein's agenda; if he had involved himself with the themes that with hindsight are central to his work, he may have evolved a more interesting late body of work.

The viewers of these works of art, now firmly installed in an art gallery, can take part in the dialogue concerning dichotomies in modern society, rather than merely play the voyeur who reads comic-books in private. This aspect of Pop Art, which was a form of Neo-Dada, took its cue from Marcel Duchamp, the witty manipulation of imagery so that the original meaning becomes ambiguous. The personal catastrophes of the 'Drowning Girl', for example, 'I don't care! I'd rather sink … than call Brad for help!' were elevated to the realm of art, by virtue of its amplified scale and its installation in an art gallery or museum space. Reinforcing this notion is Lichtenstein's 'Art', of 1962, a large oil on canvas (91.4 x 172.7 cm.) which consists simply of the word ART painted like a commercial sign in three colours. In both form and content, the commercial comic-strip, 'derives from its function of trivializing and generalizing emotions, actions, people and objects so as to make these conform to popular opinion.'5

It is generally held that because comic books are created by production teams in which each specialist is responsible for a particular part of the production, the final outcome does not usually represent a cohesive theme. There is an anonymity in the mass-produced, sometimes vulgar and cheap comic book; the pictorial language, the typography, the pixels, all are borrowed from the aggressive language of advertising. Comic books traditionally inhabited the other end of the spectrum to the fine arts. It was precisely the commercial elements according to Tilman Osterwold in his most accessible study of Pop Art (1999), that helped Lichtenstein 'to exploit to the full, certain moods calculated to suggest the existence of something real. He was thus able to track down contemporary stereotypes of reality while simultaneously keeping his distance as an artist, both from his subjects and from himself.'6

Tom Wolfe, therefore, made the ultimate criticism of Lichtenstein when he stated that his cartoon-based paintings were quite simply inferior to his source material. In Tom Lubbock’s critique from The Independent Review, he described Lichtenstein’s work in the following terms.

The comic-illustrators such as Tony Abruzzo, Russ Heath, Irv Novick and Jerry Grandinetti were artists doing really vital and original work. Lichtenstein's borrowing just obscured the originality and sapped the vitality of his sources … The cartoon artists, though highly productive, were not naïve, anonymous hacks. A lot of innovations in Lichtenstein's pictures are innovations that they came up with first. They were responsible for adapting the convention of the cinematic close-up to the still image. They worked out the dynamic interaction of image, caption, speech-bubble and sound-effect. They devised those dramatic compositions from which Lichtenstein's work gets much of its impact. These illustrators, it seems to me, should be co-credited (alongside Lichtenstein) with the paintings to which they made such decisive though involuntary contributions.7

Lubbock believes that, in artistic terms, Lichtenstein's paintings are quite inferior to the originals on which they are based and although they do not constitute true plagiarism, there was such a degree of dependency in the matter of both image and composition, that Lichtenstein could not really function independent of it. Following the great success of the work produced between 1960-1965, Lichtenstein turned to stylised, impersonal works (using the limited formal language of the comic-book illustrators) that formed a dialogue with artists from the past including Cézanne, Picasso and Matisse. In doing so he questioned the very nature of artistic communication and 'the fact that reproduced reality now seems to many of us to be more real than reality itself'. As Whitford stated:

The brushstroke in an Abstract Expressionist painting is the epitome of freedom, individuality and of a painterly sensibility itself. What happens to it when it is reproduced by means of the simpler and simplifying language of photographic, technical reproduction, when it is redone in terms of the screen dots, primary colours and heavy contours of the comic-strip? It remains recognisable; yet it has become the opposite of itself. Total freedom now is rigorous discipline and its uniqueness, its autograph quality has been reproduced in a parody of the infinitely reproducible.8

The late works are disappointing. They give the impression that Lichtenstein's exploration of reality (as described so plausibly by Frank Whitford) and the transference of images from one medium to another, was not enough to sustain a long career. Many of Lichtenstein's works do not warrant inclusion in the Hayward Gallery show, but perhaps seeing them in this context - and against the backdrop of the important 1960s work - his career, and his contribution can be assessed in a more reasoned light. Lichtenstein's career was so overly focused on the aesthetics of the comic-strip that it did not develop in the independent and complex way that Eduardo Paolozzi or Andy Warhol's career's did. Lichtenstein limited his dialogue to a self-referential visual language - he was a playful technician who was not able to sustain his initial success or to diversify his initial achievement in the way Eduardo Paolozzi managed. Paolozzi developed a complex and original oeuvre that was informed by but not dictated by Pop Art. The breadth of his understanding of art history as well as of contemporary language and ideas is evident in a recorded conversation he had with Frank Whitford, and JG Ballard, published in Studio International in 1971, at the time of Paolozzi's exhibition at the Tate. Paolozzi stated:

A Lichtenstein is no more radical really than say, a Manet. I mean, Manet completely revolutionised painting. If I can cast myself back to 1850, or whenever it was, I can see that Manet delivered a body blow to the safe and comfortable posture of the intelligent eye. How can any Pop painter be said to have had that kind of impact, to have advanced beyond that? As far as I'm concerned there's a slight note of disillusionment with America now; the American dream is over.9

Compared to the superb Donald Judd retrospective at Tate Modern (which I expected might have been disappointing) after all these years, Lichtenstein has suffered from over-exposure and undue elevation in all respects. 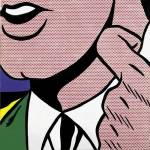 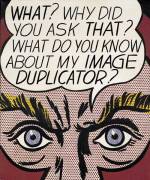 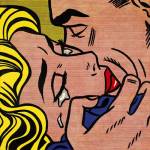 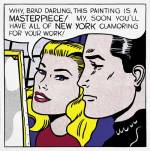