It seems to be the close season for Paolozziana at the moment, notwithstanding the presence in Tate Modern of the Warhol-Koons brand of Pop Art. Paolozzi, of course, was genuinely credible as the founder/pioneer of British Pop Art, as distinguished from its American variant. This new exhibition at Raven Row focuses usefully on Paolozzi’s more political engagement in this field, particularly here on his works for the journal Ambit, to which he was recruited by the author J.G. Ballard (subsequently a special friend). In 1967 Paolozzi laid into the Vietnam War, which led to a series of openly mocking works, laced with an abject scepticism for his 1971 Tate Gallery retrospective exhibition. Waste (Cloud Atomic Laboratory) 1971, took the form of an Aluminum skip with ancillary ‘objets’. Accompanying this was the work Thunder and Lightning with Flies and Jack Kennedy 1971. With both works Paolozzi chose to condemn both the Vietnam War and the president, both of which sickened him. This was of course to the chagrin of the Tate Gallery and its then Director, Sir Norman Reid. The Gallery has perhaps even now scarcely forgiven him (one does not bite the hand that feeds one it seems). To Ambit, Paolozzi was able to introduce relevant collages here, plus his own texts and visual essays. There are many relevant works in this exhibition. Beyond the morass of Vietnam, Paolozzi addressed too the incipient acceleration of new technology and the proliferating world of advertising.

This Ambit focus for the exhibition also contains sculptures, bronzes, graphics and extremely rare ‘scrapbooks’ which were an obsession of the artist, engendering such works as General Dynamic F.U.N. and Moonstrips, each an Aladdin’s cave of such imagery. There are also examples of the metal toys, which Paolozzi accumulated (and this rather earlier than did Warhol) on trips to the US and Japan. But they shared the same obsession. The book/catalogue contains images from Ambit’s celebratory Tenth Anniversary Issue, plus pages headed beguilingly (but non sequitur) ‘from a novel by Eduardo Paolozzi’. The replicated cover of Ambit No 50 shows J.G.Ballard, Paolozzi and friends admiring a net-shrouded female model. There are also film scripts by Paolozzi – and so the compendium continues. Four Corners Books (Elinor Jansen) are to be congratulated on this timely souvenir of a tempestuous but highly productive period in Paolozzi’s career.

The exhibition takes the wraps off a key formative period in Paolozzi’s work, since after the Tate Retrospective a number of commissions for reliefs within buildings, or doors for buildings, and indeed ceiling and tapestry panels (as for Cleish Castle in Scotland) ensued, which set Paolozzi on a productive course for the next two decades. But inexplicably, the Tate Gallery never came to commission a work. There is a major collection of the work of Sir Eduardo Paolozzi at the National Gallery of Modern Art/Dean Gallery, Edinburgh, together with the Cleish Ceiling Panels installed. 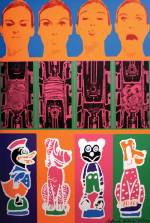 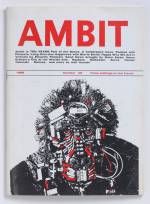