The power and efficiency of the modern marketing industry is now, perhaps, at its height; but many of its most effective techniques were pioneered by entrepreneurs who did not have high-speed telecommunications networks at their command. One notable marketer of her name and taste, Dorothy Draper (1889-1969), did so with her dynamic personality, commanding presence and idiosyncratic approach to design. This highly successful businesswoman and media personality, whose design ethic is once again in vogue, was the subject of a delightful exhibit at the Museum of the City of New York, which opened on 2 May 2006. The show marked the first occasion in which a major museum held a retrospective for an interior designer.1

The curators of 'The High Style of Dorothy Draper' have attempted to give viewers a sense of how Draper's interiors affected those who visited the hotels or worked in the office buildings that she designed. Walking past old photographs of places that made her famous - the Carlyle, the lobby of San Francisco's Fairmont Hotel, the Camellia House Supper Club at Chicago's Drake Hotel, Arrowhead Springs and Spa in San Bernardino, California - and a selection of furnishings, one might, indeed, begin to feel like a guest at a luxury hotel decades ago. Like Alice's adventures in Wonderland, encountering a Draper interior is like stumbling down a rabbit hole. A strong element of fantasy and play can be detected in her work. For the Camellia House, for example, Draper banished the grey skies and chilly temperatures of a mid-western winter by creating a tropical paradise indoors, symbolised by a cheerful pink camellia pattern used on fabrics, menus and advertisements. Outdoor furniture and plants helped to secure the illusion.

An interest in interior design was not uncommon for a woman such as Draper. She was born into one of the oldest and wealthiest families in America, the Tuckermans of Tuxedo Park, New York. She attended the exclusive Brearley School before being presented to society in 1907. Like some of her friends, Draper began designing as an entertaining pastime. In 1912 she married Dr George 'Dan' Draper, a man of equal standing in society. The couple had three children together and divorced in 1930.

However viewers feel about Draper's interiors and furnishings, and the licence with which she combined and exploited a wide range of styles, they will encounter a woman whose drive and self-confidence are impressive. In 1925, at a time when women were just beginning to break from traditional roles and venture into the public eye in new ways, Draper started her own firm and embarked on a long and lucrative career. Credited with establishing the commercial interior design profession, Draper soon made her mark in New York. In 1930 she received her first major commission, the Carlyle Hotel. In 1937, she was tapped to decorate the 37 floors of the Hampshire House Apartment Hotel.

She quickly formed important connections with such powerful real estate developers as Douglas Elliman (a family acquaintance), who was instrumental in gaining important commissions for her. While solidifying these relationships and linking manufacturers and retailers into a supply network, Draper extended her reach into new fields as a bestselling author of books on interior design; a design consultant for Good Housekeeping magazine; a columnist whose 'Ask Dorothy Draper' appeared in 70 newspapers three times each week; a designer of fabrics (for F Schumacher), stationery and wrapping paper; and a media personality. (The exhibit includes a video of her appearance in the 1950s on Edward R Murrow's television programme.) She even provided designs for automobile interiors (Packard) and for a model of the recently developed jet plane, the Convair 880.

The six-foot-tall Draper's style was as dramatic as her physical presence and personality. Although there are distinctive elements that form the backbone of her designs - baroque ornamentation, over-scaled flower patterns, fireplaces, black and white floor tiles, plants and startling injections of vibrant colour - she had an uncanny knack for adapting her idiosyncratic personal vision to a range of environments, creating moods that matched the targeted clientele of each venue. For Hampshire House, it was urban sophistication. For Arrowhead Springs, she satisfied Hollywood moguls and movie stars with glamour. For the Greenbriar in White Sulphur Springs, West Virginia, she designed an 'exclusive' country club. And for Quitandinha in Brazil she took inspiration from the exotic surroundings.

She also had a talent for creating iconic images and phrases that found easy footholds on the American imagination: 'If it looks right, it is right' and 'The colour of your front door announces your personality to the world'. She encouraged housewives to approach home decorating as a creative endeavour and source of freedom. Women across the United States worked to recreate the 'Draper Touch' in their own homes, while manufacturers applied what they called 'Draperising' to their products. Certainly, viewers will sense a kind of liberation in Draper's designs, yet she was known to be an imperious woman who insisted on controlling every aspect of a project.

During the 1950s, changes in taste and business began to erode Draper's primacy in the public eye. Architects were taking over the interiors of their projects, while minimalism was embraced as a style, particularly for commercial spaces. Before too long, the one-of-a-kind interiors supplied by Draper would be out of fashion. In 1962, designer Carleton Varney joined Dorothy Draper & Co, which he now owns. A protegé of Draper's, Varney has continued the company's legacy of providing designs for large hotels, hospitals and public buildings, including Dromoland Castle in Ireland, the Waldorf Towers in New York and the Greenbrier. Like Draper, he is a columnist and has written a number of books, including volumes on Draper.2

Elements of Draper's original designs can still be found - chandeliers in the Metropolitan Museum, for instance, where she designed the Roman court restaurant in the 1950s - but there are new incarnations of her vision, as well. Recently, such young, sought-after designers as Diamond Baratta and Kelly Wearstler are breaking free of the austere, minimalist approach to interior design and making a statement of their own by embracing Draper's eclectic arrangement of styles, colours and patterns. And Draper's bestselling title Entertaining is Fun: How to Be a Popular Hostess (1941) is once again in print.3 From the dream house at the 1964 World's Fair to the orange and blue colour scheme seen on the facade of Howard Johnson's restaurants across the United States, the Draper touch extended far and wide. 'The High Style of Dorothy Draper' is just one piece of evidence of revived interest in her marketing savvy and design bravado. 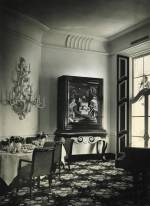 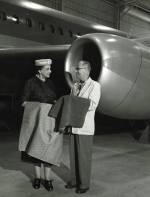 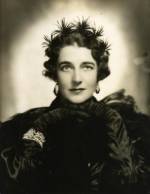 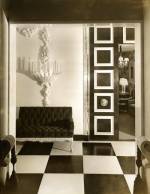