Focusing on the rich seam of Stella’s prints, this show gives an insight into the remarkable collaboration between Stella and Tyler, in which anything was possible

Frank Stella: The Kenneth Tyler Print Collection is a superb exhibition that reveals just a fraction of the vast holdings of 20th-century American prints at the National Gallery of Australia. The NGA has had an association with Tyler prints since the Australian art critic Robert Hughes (1938-2012) first acted on its behalf in the early 1970s, which in turn led to the pivotal acquisition of 600 works. The works formed the foundation of the NGA’s exceptional collection of international prints, drawings and illustrated books.

In 2002, with Tyler’s support, the collection was increased to 7,000 pieces, including a wide range of prints, proofs and screens, print matrices, film and photography. It is one of the strongest collections in the world, and the Stella pieces are fantastic, enabling a series of 10 documentary films to be made. Stella’s pieces are more than conventional works on paper, as the methods, employed in collaboration with master printer Tyler, resulted in vast, spectacular, technically ambitious feats, that are at times three-dimensional.

Stella first worked together with Tyler in the 60s, when Tyler’s print workshop was in Los Angeles, and later in his other three workshops, until the closure of the Mount Kisco workshop in New York State in 2001. In their hands and minds, printmaking moved from a studio that was mostly based on traditional methods to an international art form capable of endless invention. It is no exaggeration to observe that the Tyler workshops precipitated a renaissance in printmaking. The NGA exhibition opens just over a year after Stella’s retrospective opened at the Whitney Museum in New York, yet by focusing on the rich seam of prints, a cohesive view of this extraordinary artist is attainable, making it an important show on many levels.

From an early stage of his career, Stella (b1936), who experienced meteoric success in his early 20s, emphasised the making of work rather than the final product. In an interview as early as 1966, he described American art as being in a terrible state, and said art should not possess hidden meaning, biographical reference or social comment. Being younger than Jackson Pollock, Willem de Kooning, Helen Frankenthaler or Robert Motherwell, Stella was critical of the open-ended nature of late abstract expressionism, describing it as “chaotic, academic, and mannered”. He astounded the art world, at the age of just 23, when the large paintings made up of black stripes were selected for the Sixteen Americans exhibition in New York in 1959. The geometric simplicity of his minimalist works assured his place in American art, and he has maintained a staggeringly productive career.

Showing at the Leo Castelli Gallery in New York in 1960, Stella soon came to the attention of Tyler, who was always on the lookout for talent to work with at Gemini, his print workshop in Los Angeles; Stella had already moved to the west coast to teach at the University of California. Stella, however, rejected Tyler’s suggestion that they work together, believing printmaking to be unsuited to his working methods. Tyler had to substitute lithographic tusche in to Stella’s felt-tipped pens to have him agree to work together. Years later, Stella conceded: “I knew absolutely nothing about printmaking when I started out, and I don’t really know anything about it now. People forget that when you’re making art, you just screw around, especially for me, since I didn’t go to art school, not only did I not study printmaking, I didn’t know anything about painting either.”1 Five decades of ingenuity later, the exhibition at the NGA offers insight into their remarkable working relationship, a collaboration of great vision where anything was possible, and hard work dominated the process.

Like many artists at the time, Stella saw printmaking primarily as a reproductive method, as engraving had historically been used as a means of copying paintings for greater distribution. The use of a chevron-shaped plate in his early prints put an end to such restrictive concepts, enabling a range of configurations to be created in the printing. There followed his immediately recognisable Protractor (1967) paintings, which employed bold curvilinear forms, marvellous in both colour and scale.

The 1980s saw a shift in Stella’s working method, where collage was used to create dynamic, rich juxtaposition of patterning and form. The “offcuts” from his painterly sculptures formed ready-made imagery. Tyler and his workshop made it possible to make prints from inked relief collaged from wood remnants. Once each segment of the work was inked, it was placed like a jigsaw piece to make the whole, and then printed. Film footage at the exhibition captures the thrill of piecing and printing the work. The Circuits series (1982-84) evoke speed and visual drama and the artist’s passion for car racing.

At the laser-cutting factory that made Stella’s relief paintings, Stella noticed that the machine cut through to a wooden surface below. This he referred to as his “found drawing”; it created a fluidity between his painting, sculpture and printmaking: “I loved the idea that simply inking the surface of the plywood board would produce a web of white lines, if one only pressed a piece of paper against it. All of a sudden, I had a way of working with printing that freed my hands, and I had a way of working with printing that could be developed alongside my work with painting.”1 Tyler recalled the liberating effect of Stella’s processes, the Circuit works being: “One of the most inventive and colourful we as printmakers had ever created.”1 Printmaking at this point of Stella’s career can be seen to infuse his image-making with a new complexity and certainty, and a wide range of new forms.

The Swan Engravings (1982-85) are black and white on a greatly amplified scale, dynamic and high speed. The range and richness of etched lines and traditional aquatint is here achieved using magnesium plates, cut up and pieced back together, combining areas of lace-like delicacy and passionate deep troughs. Hand-made paper on a larger scale than previously manufactured was made especially for these works.

It is perhaps the role of narrative in Stella’s intense abstract works that separates his oeuvre from that of any of his abstract artist predecessors. The numerous works made in response to Herman Melville’s 1851 novel Moby-Dick, in painting, sculpture, architecture and printmaking, explore idea and form in a most exciting manner, describing the difference of once having discussed “abstraction and representation … Now we have new opportunities for ‘synthesis’.”1 Stella’s Moby Dick (1988-1993) captures the confrontation with nature experienced at sea; the abstract forms evoking the destructive potential of the sea and the whale.

The sculptural prints made using the form of a dome are rotund and intensely coloured. Technically, the shaped paper took years to produce, requiring Tyler to create a vacuum method to sculpt paper pulp that was ambitious and problematic, but which projected vivid colour into the gallery space. The mural print, The Fountain (1992) is a high point in the NGA show: its scale and theatricality brings Melville’s classic to life while representing Stella’s technical and formal development.  The multipanelled work took pride of place at the Whitney retrospective and it now plays a key role in the NGA show. It is the piece that reflects Stella at the height of his career, working with confidence and authority. The paper is sumptuous and sculptural, commissioned from Fuji Paper Mills Co-operative in Tokushima; and a 500-ton platen press was designed to print the panels. It is a celebration of Stella’s collaborative relationship with Tyler and his team over five decades, a collaboration that Tyler describes as standing out from all other artists: “A close look at his printmaking reveals a slow and timid start in the early 60s that culminated into an explosion of scale, colour, texture and bold imagery of The Fountain work. No artist before or after has succeeded so brilliantly in filling the graphic space with so much visual impact.”1 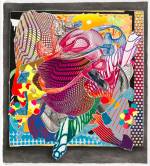