Most early reviews of the Whitney Biennial have been vehemently critical, often only citing the section curated by Michelle Grabner as worthy of measured praise. This type of reception is hardly surprising. When the 2012 biennial was overwhelming lauded, most critics began by admitting that the Whitney’s famed exhibition had become the show to hate.

In some ways, it is almost too easy to slate a biennial; it is never going to please everyone; artists and trends will be left out, some countries will be overrepresented, and so on. But the general disappointment with the 2014 Whitney Biennial points to the larger frustration felt by the viewing public with the contemporary art world, which feels inaccessible and insular, and an uncertainty about the continuing role of the biennial today.

If the complaints about this year’s biennial could be distilled into a single grievance, it would be with how the show is curated. Curating and, in particular, the curating of contemporary art has become the subject of increased critical attention, as is evident from, for example, the recent publication of substantial studies by Paul O’Neill and Terry Smith, and the proliferation of courses devoted to curatorial training. The artist as curator, gathering information like an archivist or simply appropriating previous work into a larger piece, is also a growing trend, and, in the current show, Valerie Snobeck and Catherine Sullivan are examples of two artists for whom “curating” is an integral part of the artistic process. With contemporary art in particular, the curator is understood to be as much as an active participant in the creation of works of art as the so-called artist. This blurring of the lines between artist and curator is interesting, and the Whitney does well to explore it, but it is also not the root of what is ailing the biennial. Much of the fault lies with the solipsistic mode of contemporary curating, which is shrouded and defended by the prolix use of quasi-theoretical language found in the contemporary art press release, catalogue and, here in particular, wall texts. The second problem is that the curators of this year’s edition – Grabner, Anthony Elms and Stuart Comer – seem hesitant, unable to state an opinion, to present (heaven forbid) a subjective point of view. In fact, the main text panels in the galleries often begin with a list of apologies, outlining everything the curator is not going to do. An essay beginning with this type of furtive, noncommittal language would quickly be met with a professor’s aggressive and wisely yielded red pen. By being so careful, so correct, so measured, the curators make it hard for the viewer to feel confident with the display they encounter. It is also hard to know exactly how we are being led to look at the selection of works on display.

Part of what makes Grabner’s section so accessible is that she has a clear thesis. There are still the well-meaning caveats in her introduction, but she straightforwardly states her intention to explore three subjects: abstract painting by women, materiality and affect theory, and art as strategy. Are all the best works in the biennial in Grabner’s section? No. For me, two of the most compelling pieces are Lucien Castaing-Taylor’s and Véréna Paravel’s video Leviathan, about humanity’s relationship with the oceanic world, and Zackary Drucker and Rhys Ernst’s photographic series Relationship, a group of intrusive and tender images that match the eloquence of Nan Goldin’s The Ballad of Sexual Dependency (1979-96): both of these works are in the section organised by Comer. But what Grabner excels at is presentation: her floor is a visual feast of colours and textures. Sheila Hicks’s cascading column of yellow, orange, red and dark pink threads uses fibre as line, creating something that is posed between drawing and sculpture, while Jacqueline Humphries’s monumental shiny silver canvases and Dona Nelson’s brightly painted and punctured canvases covered in staccato marks of brightly stitched thread are prime examples of the strength and depth of female abstract painters today.

If I have one piece of advice for visitors to the 77th Whitney Biennial, it is to take the stairs. As the last biennial to take place in the museum’s Breuer building, the exhibition makes frequent reference to its soon-to-be former home, and some of the most memorable parts of the show occur where one of this year’s three curators, in particular Elms, engages directly with this unusual work of architecture. The stairs provide the setting for Charlemagne Palestine’s sound and sculpture piece. Drawing on his formal training as a cantor, Palestine recorded his work as he ascended and descended this same stairwell, chanting into the echo-producing space. The resulting installation is haunting and mesmerising; it makes you want to linger in this often ignored, purely functional space. Architectural oddities, such as the Breuer’s iconic prismatic windows, are harnessed to brilliant effect by Zoe Leonard to create one of her large-scale camera obscuras. On the fourth floor, Leonard’s work takes up one of the largest galleries, into which the world outside is projected upside-down, with the traffic passing along the ceiling and the stoic high-rise facades stretching to the floor.

Every two years, the Whitney Biennial sets itself the challenge of answering the question “What is contemporary art in the United States now?” This question is simple and allows for a range of answers, which makes it a good starting point for a recurring event. The exhibition does seem to be at a crossroads. One thing each of the curators tries to get away from is the expectation that they should present a survey of contemporary American art instead of an interpretation: they just do not seem ready to admit this is what they are doing. There are interesting ideas and great works in this show, but as an audience, it would be helpful if we stopped expecting the Whitney Biennial to do something it cannot. 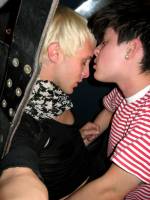 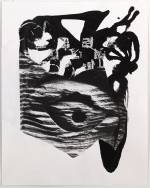 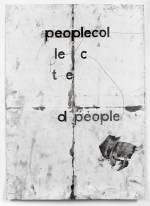 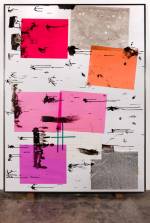