Now at two New York shows, Jaar continues to challenge social and political injustice. At the Whitney Biennial, we witness Black Lives Matter marchers being attacked by police and at Galerie Lelong, the artist gathers the work of more than 70 activist artists who have been central to his own thinking 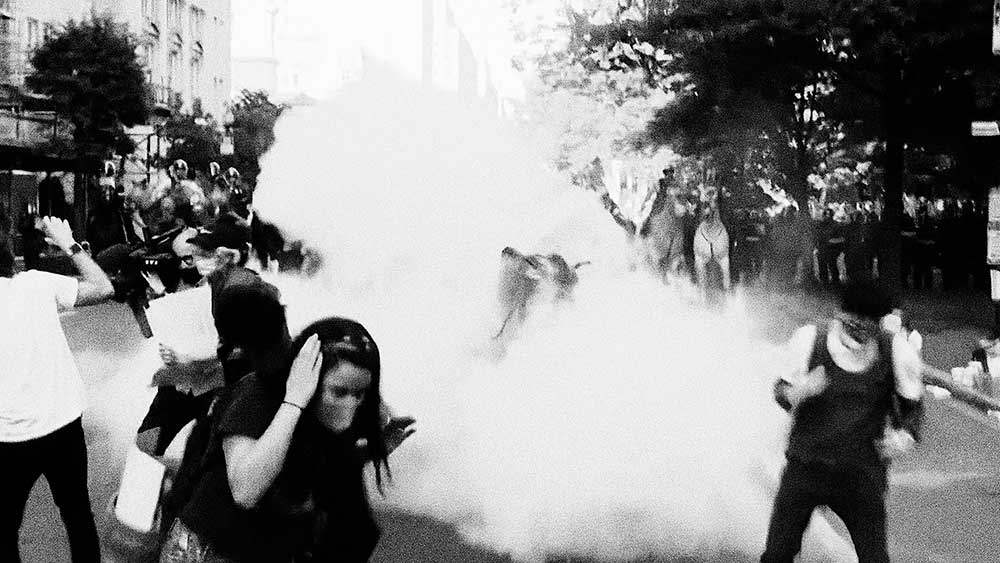 The multidisciplinary conceptualist Alfredo Jaar (b1956, Santiago, Chile; based in New York) has been producing riveting and often controversial installations for more than four decades. Through his use of unforgettable images and carefully scripted text, he has told us the stories we needed to know and asked the necessary questions, flagging big subjects from Rwandan genocide to critiques of photojournalism and its potential for exploitation and other ethical lapses. The latter is perhaps most resonantly scrutinised in The Sound of Silence (1995), based on the Pulitzer-prize winning photograph by Kevin Carter of a tiny Sudanese girl curled up in the dirt in hunger and exhaustion stalked by a vulture during the country’s 1993 famine. 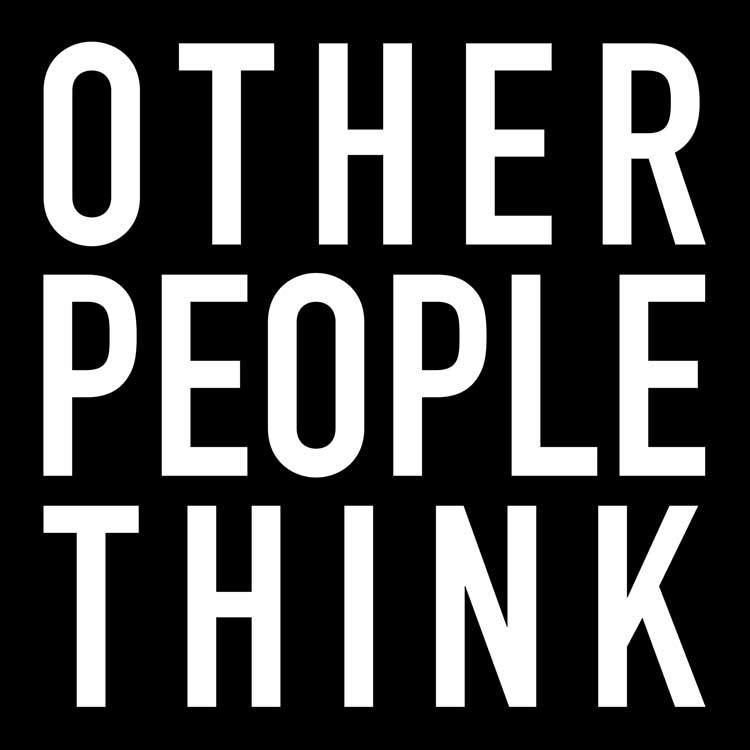 By means both theatrical and elegantly pared down – a kind of agitprop formalism – Jaar challengingly addresses social and political injustice. A fierce opposition to authoritarian repression rooted in the brutal history of his homeland leads him to perennially consider the impact that images have, and the moral complexities and responsibilities that comes with their use, even as he astutely, ingeniously deploys photography, film, installation, digital media and text to make his arguments. Targeting the most mordant or poignant moment of his tale, his presentations are always engrossing, often haunting, culminating in a moment of visual shock and reckoning. Jaar has his ardent supporters who applaud the humanity and risks of his mission and methods. He also has detractors who find him too sensationalist, criticising him for aestheticising the tragedy of others, and worse. But to make his representations indelible is essential to their purpose as a catalyst for reclamation and amelioration. 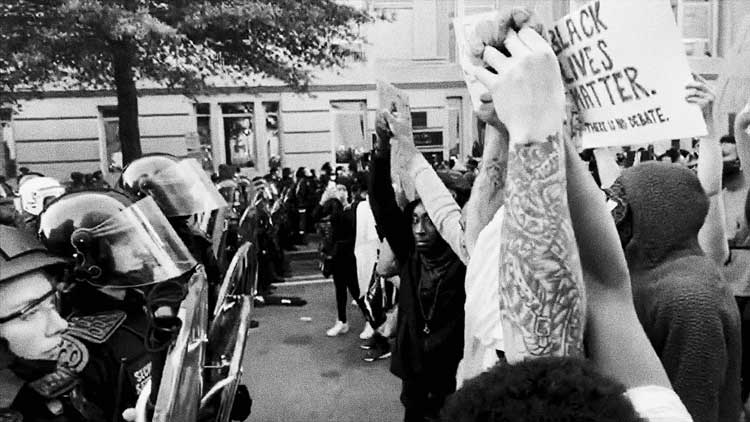 Jaar is currently on view in two exhibitions in New York. 06.01.2020 18.39 (2022) debuted in Quiet As It’s Kept, the 2022 Whitney Biennial and is a signature venture, if seemingly rather more straightforward. The five-minute black-and-white video is projected on the wall of a closed, pitch-black room, viewers allowed entrance and egress only as it begins and ends. In a tribute to the thousands of marchers who gathered in Washington DC in the days following the murder of George Floyd under the banner of Black Lives Matter, Jaar zooms in on the evening of 1 June 2020, which he choreographed into three movements: the initial peacefulness of the protest; the firing of teargas cannisters, stun grenades and rubber bullets into the crowd; and the helicopters.

The arrival of the National Guard helicopters is the critical moment of his video. No one else seemed to be taking them seriously, he said. But he did, from his memories of Augusto Pinochet’s Chile. One hovered terrifyingly low to the ground at one point, in violation of international human rights law, endangering the many marchers in the vicinity. What had begun peaceably splintered into chaos and violence. The reason? As everyone now knows, the police (in full riot gear) had been ordered to clear the area so that the then president, Donald Trump, could have a photo op in front of St John’s church, holding a Bible, before the 7pm curfew just decreed by Washington’s mayor. It concludes with a novel special effect, which I will leave at that. Go and see it for yourself if you are in New York. 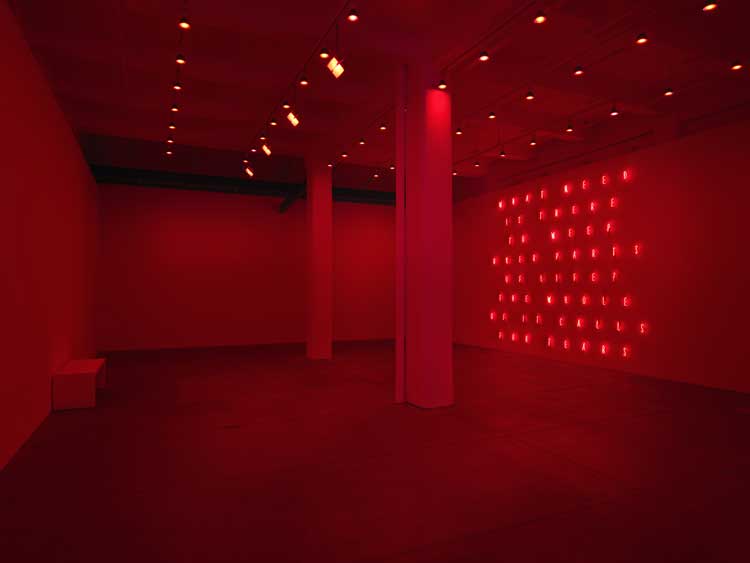 Jaar’s work is also at Galerie Lelong. Called The Temptation to Exist, it is a two-part invention and more understated, if also more expansive. One part is a philosophical declaration; the other a spectrum of works by activist artists who have been central to Jaar’s own thinking and practice, tented together in an encompassing salon-style installation. The title is a nod to Emil Cioran, the Romanian writer of existential despair who questioned the meaning of human life in the face of its failures and of mortality – arguably its ultimate failure. A kind of prologue or frame to the images in the show, it is also in sync with the bleak text spelled out anomalously in garish red neon capital letters on one large wall of the main gallery as if on a marquee: What need is there to weep over parts of life? The whole of it calls for tears, a work from 2018. The quote is from Seneca, the Stoic philosopher (d AD65) and remains heartbreakingly true, as confirmed by each day’s emblazoned headlines.

The red light that fills the space has an eerie, disquieting glow, setting the mood for a range of associations from festive theatrical signage and the enticements of redlight districts to the ominous glare of war to imaginings of the post-apocalyptic. It might also remind us that Seneca was forced by Nero to take his own life, which he did in the time-honoured Roman manner by slashing his wrists. 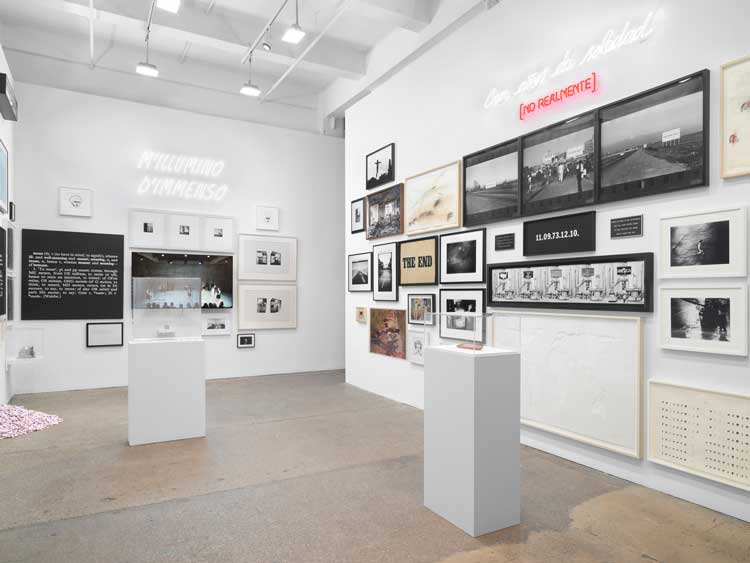 The second part is hung in the smaller gallery and features works by more than 70 artists. Some are the usual suspects, others not – or not in that roundup – adding the unexpected pleasure of their company and a more nuanced, in-depth view of Jaar’s ideas of resistance and activism. They include, at random, Ana Mendieta, Joan Jonas, Stanley Brouwn, Shōmei Tōmatsu, Nancy Spero, Bas Jan Ader, Art Workers’ Coalition, Carrie Mae Weems, Shirin Neshat, Fred Baldwin, Dawoud Bey and Yves Klein, as well as several works by the artist. Jaar’s “protesters” – in reinforcement of his Whitney protesters – form an imposing, diverse, polyphonic cohort of agents provocateurs, their art seen anew in relationship to each other, exponentially empowered by the others, boosting morale in a time like this: a gift. Around half are women, a percentage even now not often attained, and the show is dedicated to Letizia Battaglia, who died in April, a photographer and activist best known for her fearless documentation of the Mafia’s murderous rampages throughout Sicily, once uncurbed – and thought to be uncurbable. 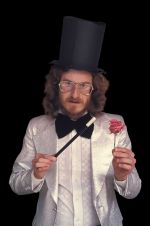