Alfredo Jaar: A Logo for America

Alfredo Jaar: A Logo for America

The first UK screening of Chilean artist Alfredo Jaar’s iconic work, A Logo for America, at London’s Piccadilly Circus. It was first shown in New York’s Times Square in 1987, and again in 2014.

A Logo for America will be screened at Piccadilly Circus at regular intervals from 28-31 July 2016, as part of the South London Gallery’s exhibition Under the Same Sun: Art from Latin America Today, organised by Pablo León de la Barra in collaboration with the Guggenheim Museum, and running until 4 September. On an electronic billboard, the words “This is not America” are written across an outline map of the United States. Through the juxtaposition of word and image, the Chilean-born conceptual artist Alfredo Jaar drew attention to the fact that the word “America” is wrongly applied to refer just to north America rather than both parts of the American continent. When it was first unveiled in New York’s Times Square in 1987, A Logo for America provoked outrage. Today, nearly 30 years later, passersby in London’s Piccadilly Circus witnessed the UK premiere of his work at a time of anxious uncertainty about presidential candidate Donald Trump’s attitude to South America.

Having trained as an architect and film-maker, Jaar’s works are highly attuned and sympathetic to their context and surroundings, with a particular focus on immigration. During this year’s Art Basel in Switzerland, volunteers gave out The Gift (2016). Recipients were given a small card box, around which were wrapped an image of the Turkish beach that was seen around the world when the lifeless body of the drowned Syrian toddler Aylan Kurdi was discovered there in September 2015. Central to this work was the dialogue between the public and volunteers, with people being encouraged to donate to the Migrant Offshore Aid Station, a charity dedicated to saving lives at sea.

• Under the Same Sun: Art from Latin America Today is at the South London Gallery until 4 September. The exhibition highlights recently acquired works by more than 40 artists and includes installation, painting, performance art, photography, sculpture and video. 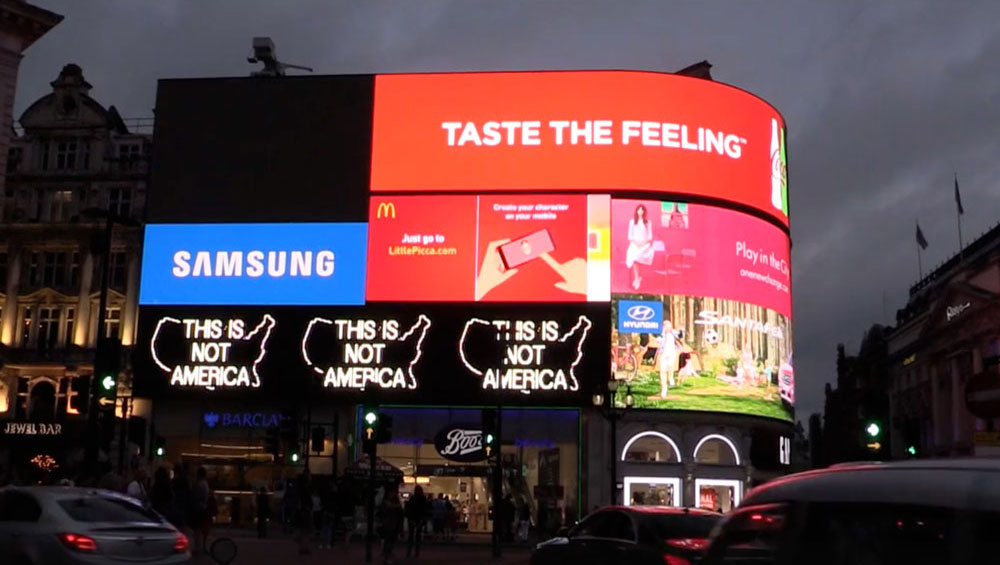