Terrains of the Body: Photography from the National Museum of Women in the Arts

Terrains of the Body: Photography from the National Museum of Women in the Arts

Building on the legacy of feminist art from the 1970s, this exhibition includes photographic and video works by 17 contemporary artists from five continents, from the 80s to today, presenting woman as creator and subject of her work 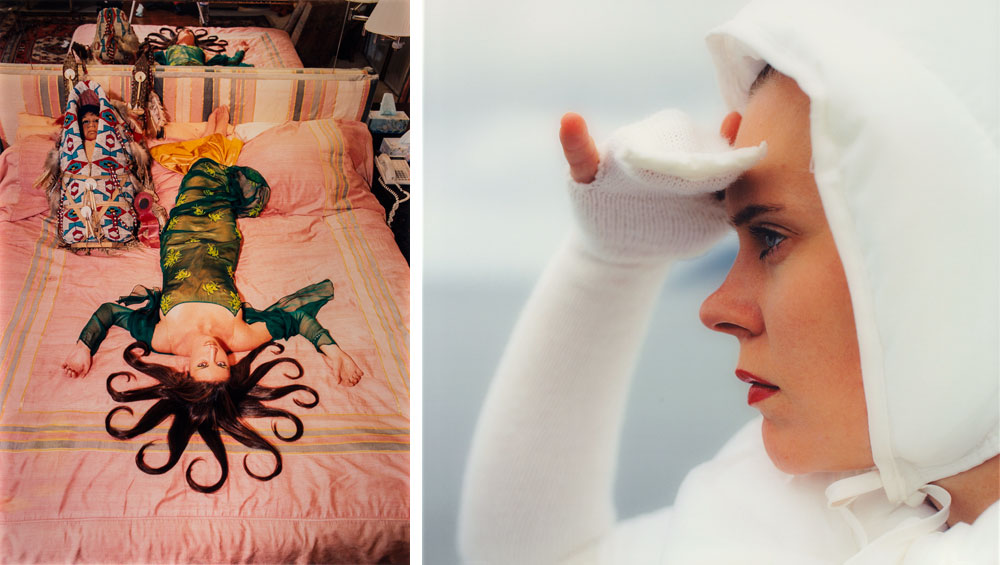 “Presentations of work by women artists are usually accompanied by sob stories and violins,” says Kathryn Wat, chief curator of the National Museum of Women in the Arts (NMWA), Washington DC – the only international museum dedicated to the exhibition, preservation and acquisition of works by women artists of all nationalities and periods. She continues: “They tell how women couldn’t get into academies, couldn’t get sponsorship, but, nevertheless, went on to achieve. But, with photography, it’s different because women have been at the forefront of this medium since the very beginning.” The one-room display at the Whitechapel Gallery, Terrains of the Body, co-curated by Wat, presents photography and video works from the NMWA collection, as part of the London gallery’s programme of opening up rarely seen collections from around the world. Building on the legacy of 1970s’ feminist art, the exhibition includes works by 17 contemporary artists from five continents, from the 80s to today, presenting woman as creator and subject of her work.

The show’s title, Terrains of the Body, makes reference to the staging of the female subjects in various settings, but the term “terrains” also evokes a sense of ownership, in some cases rebelling against the dominion of the female body by man, but also taking possession of the medium of photography by woman, as a means of expressing her history and identity. Ownership is also taken back of the presentation of the medium, so ubiquitous in our digital 21st-century society, by presenting the images as large-scale prints of different formats, offering quite a different experience from the on-screen encounters of the quotidian.

There is a tension in the show between photography that tells truths (documentary) and that which creates narratives. Some works, such as Nan Goldin’s Self-Portrait in Kimono with Brian, NYC (1983) – from the Ballad of Sexual Dependency series, photographing the gay community of which she was a part – sit on the cusp. Here, the couple appears post-coital, possibly also post-fallout – it is left up to the viewer to interpret and spin a tale …

The subject in Daniela Rossell’s Medusa (1999) – from the series Rich and Famous (Ricas y famosas) – creates her own fiction, however. In each portrait in the series, the subject was asked how she wished to perform and pose for the camera. Here, she is portrayed lying on her bed in a gossamer gown, her hair laid out like the snakes of Medusa. But, significantly, Rossell’s tripod is also in the shot, making it, on some level, also a self-portrait. The same is true of Candida Höfer’s Palazzo Zenobio Venezia III (2003), in which the reflection of the artist and her Hasselblad camera appears in the mirror – itself reflecting a multiplicity of mirror frames, as well as multiple hers – within the empty, ornate interior of the Venetian palace. Notoriously shy, the artist rarely depicts any person at all in her empty interiors, seeing them as distractions from the subject at hand. Whether the choice of this venue for one of her rare (if indistinct) self-portraits carries significance in its having been rented by Madonna in 1984 for the Like a Virgin video, who can say?

Loss of virginity is also suggested in Charlotte Gyllenhammar’s The Fall III (1999), depicting a still from a film work of a woman hanging upside down, seen from below, her white skirts around her face, ruffled and elaborate like a wedding dress. Similarly on a marital theme, Eve Sussman & the Rufus Corporation’s Themis in the Birdcage (a photographic still from The Rape of the Sabine Women) (2005) possibly speaks out against the institution, echoing the fairytale of the Erl-King, in which the caged birds are young girls, imprisoned and enslaved to man.

Looking at the history of racial slavery, Mwangi Hutter’s Shades of Skin (2001) is a powerful series of four images, depicting fragments of the body, in shades ranging from white to black. All four images, however, are of the same body (Ingrid Mwangi’s, one half of the collaborative duo). The scars on the back of the second image and the dangling feet, as if belonging to a hanged corpse, in the fourth, add sinister undertones to this already arresting work.

The seemingly lighter, spontaneous snapshots of Hellen van Meene are actually painstakingly planned and executed, comprising moments of intimate exchange between the artist and her subjects. For Untitled (79) (2000), for example, in which a teenage girl reclines on a velvet chair, her pert nipple visible through a sheer blouse, the subject was unable to blow the bubble in the gum she is chewing, and so Van Meene had to do it for her. The translucent and slightly misshapen pink bubble parallels the tender and delicate swelling of pubescent nipples and the tumescence of young breasts.

The awkwardness of pre-pubescent bodies is further captured by Rineke Dijkstra in Kolobrzeg, Poland, July 23, 1992, in which three girls stand on a beach, their swimwear clinging to their spindly, angular, Schiele-esque figures, together casting one shadow, like the Three Graces, goddesses of such things as charm, beauty and creativity. Similarly, in Tiergarten, Berlin, Germany, July 4, 1999, a young girl, wearing a summer dress, stands in a classical pose, one knee bent and her hip thrust forward. The clash of her young innocence with sexual provocation and the classical nude beauty both intrigues and unsettles the viewer, who immediately questions the appropriateness of his or her gaze.

Whether making self-portraits or portraits of others, the artists in this exhibition achieve agency through their creativity and enquiry into the elemental subject of the body. Their works are an essential part of the story of women and art – a part without violins. Nevertheless, from an institutional level, it only takes a look across the corridor at the Guerrilla Girls’ display to see why exhibitions dedicated to women artists remain just as relevant today as they were 40 years ago. 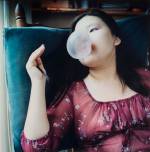 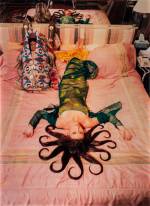