The Body as Language: Women and Performance

The Body as Language: Women and Performance

This historically salient show, examining the birth and development of performance art in relation to gender, the body, language and the expression of the self, marks the 40th anniversary of a seminal book on the subject by Lea Vergine

As early as 1918, German artist Oskar Schlemmer (1888-1943) wrote: “The new artistic medium is a much more direct one: the human body.”1 However, it was not until after the second world war that artists began en masse to turn away from more traditional media and show an interest in the body as a “vehicle for artistic discourse”.2 In the late 50s and early 60s, this new trend for “body art” began to be exploited as a way of laying claim to “being” and of experimenting with and creating new identities, investigating ideas of temporality, contingency and instability. However, much art from this period, in particular that of the Viennese actionists, has all too often been omitted from art histories on the grounds that it is too disturbing. Even sympathetic critics have frequently concluded that artists’ use of their bodies in their works is sometimes little more than self-abuse or exhibitionism. In particular, while the idea of enacting the personal as political became the motto of feminist artists emerging in the 60s and 70s, and the use of the body to examine the (largely male) constructed identity of femininity was widely adopted by the likes of Yoko Ono (b1933), Gina Pane (1939-90), Carolee Schneemann (b1939), Hannah Wilke (1940-93) and Valie Export (b1940), others, such as Mary Kelly (b1941), whose writing and artwork have come to be paradigmatic of a 70s and 80s “anti-essentialist” feminist postmodernism, and even feminist commentators such as Catherine Francblin, continued to criticise them for “colluding with the objectification of women”.3

Perhaps as a result, by the late 70s, female artists had generally moved away from the raw staging of themselves in body art projects,4 either turning towards photographic self-portraiture or producing what came to be defined as performance art. While performance art is still about the real-life presence of the artist, it is nevertheless subtly less visceral and direct than body art proper. It became accepted as a medium of artistic expression in its own right in the 70s, at a time when conceptual art – focusing on the primacy of ideas over product, and on art that could not be bought and sold – was in its heyday. Performance was seen as a demonstration of these ideas, and dedicated spaces were created in many international art centres. In addition, museums began to sponsor festivals, art colleges introduced performance courses, and specialist magazines appeared.

Lea Vergine wrote her seminal book, Body Art and Performance: The Body as Language, in 1974, and it remains an essential document – with texts by the artists themselves – of the birth and development of performance art in relation to gender, the body, language and the expression of the self. To celebrate its 40th anniversary, Richard Saltoun has mounted this exhibition, featuring 12 female artists, past and present, all of whom use their body as their medium.

Focusing on artists working in Rome in the 70s, the exhibition opens with some still shocking photographs documenting performances by Pane, where she is seen cutting herself – on her stomach, face, eyes and head – with a razor blade. Her work was influential not only on her contemporaries but for years to come, and it is impossible to look at the images, even at such a distance of time and space, without flinching.  Her practice revels in masochism, but thereby tackles such issues as alienation, the sense of being both a subject and an object, and the relationship or contract between the artist and the audience.5 Following the writings of Leopold von Sacher-Masoch (1836-95), masochism elevates woman to a high and powerful position, since she takes on a male slave and, through contract, carries out acts of violence against him, thereby heightening his sexual pleasure.6 The usual power relations are turned on their head; woman becomes superior: a politically and socially powerful statement.

Certainly the issue of woman as both subject and object is present throughout the exhibition and, as feminist critic Lucy Lippard notes: “When women use their bodies in their artwork, they are using their selves: a significant psychological factor converts their bodies or faces from object to subject.”7 Nevertheless, in many pieces, the artist seems to remain passive, as is uncomfortably the case in Teatro anatomico (2012), a film of a performance piece by Silvia Giambrone (b1981), in which the artist is observed as a lace collar is stitched to her collarbone, with close-ups of the needle penetrating the flesh and blood seeping through: a deep red on the starched white. This patriarchal sadism presents the flip side of the coin to Pane’s power-investing masochism.

The question arises of how we can present a performance when the woman whose performance it is, is no longer present. This exhibition includes photographs and films, which, to varying degrees, convey the viscerality and presence that must have been key to the impact of the works at the time. Renate Bertlmann (b1943) is represented by a film of her 1977 performance Deflorazione in 14 Stazioni, in which she penetrated 14 sheets wearing silicone pacifiers and fake plastic breasts, with scalpels replacing her nipples. A metaphor for losing one’s virginity, this work is still incredibly relevant today, in a society where the visibility of women’s nipples remains controversially taboo. That said, the film is a sadly disappointing record of what must have been a groundbreaking action at the time.

Some of the pieces included do not fall under the heading of performance, or even body art, such as the iconological examination of the depiction of female genitalia in classical statuary by Suzanne Santoro (b1946). However, this was notoriously censored in the Artist’s Books exhibition at the ICA in 1976, and is doubtless included, therefore, for its significance in the history of women artists representing – or investigating the representation of – women’s bodies. Less provocative is Coccinelle, the 32-part embroidery work comprising individually framed memories – birth, death, and all that comes in between – by Alice Schivardi (b1976), that hangs beside the 2012 black-and-white photocollages superimposing sexy pin-ups on scenes of massacre by Goldschmied & Chiari (Sara Goldschmied, b1975 and Eleonora Chiari, b1971), which could easily be taken for one of the 70s works.

As Vergine summarises, in body and performance art: “One’s own life, the proofs of one’s own existence, and the entire sphere of everything ‘private’ are used as repertory material. Anything and everything can be pressed into service: any action from any moment of any day, photographs of oneself, or x-rays, or medial test graphs, one’s own voice, all of the possible relationships one can have with one’s excrement or one’s genitals, reconstructions of one’s past or the theatrical presentation of one’s dreams, the inventory of the events of family history, gymnastics, mime and acrobacy, blows and wounds.”8

The exhibition, sadly, is not that visually compelling, but historically it packs a punch as a documentation and revisiting of a genre adopted by women at the height of the feminist art movement and, as is made apparent here, surviving today – still fighting, lamentably, the same causes and expressing many of the same concerns. 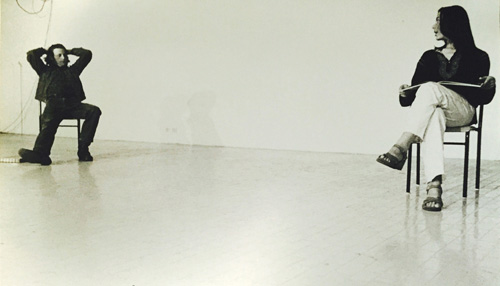 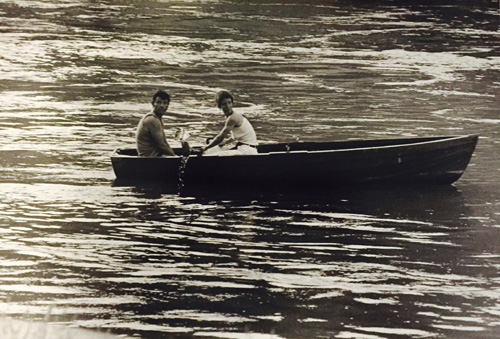 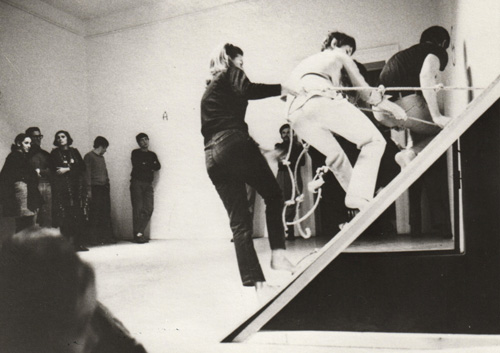 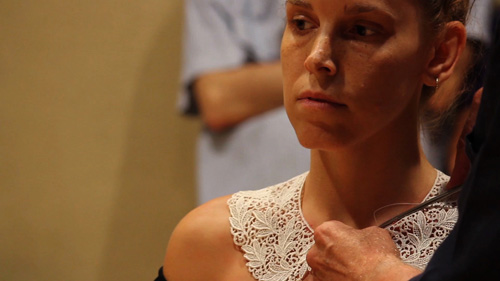 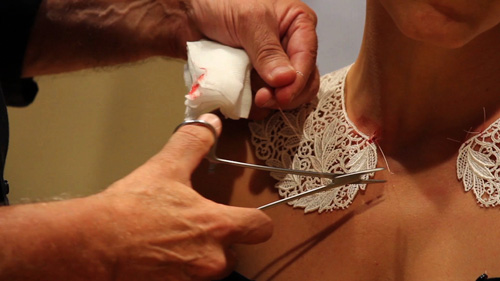 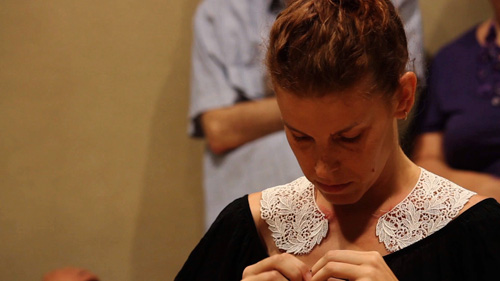 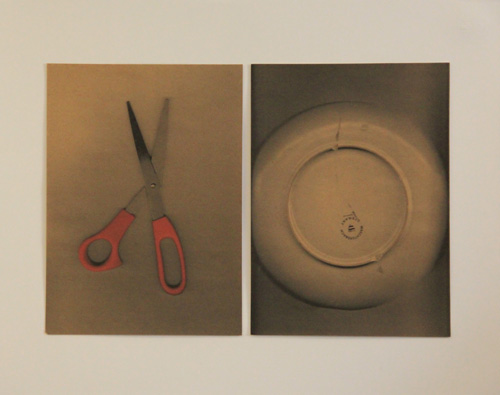 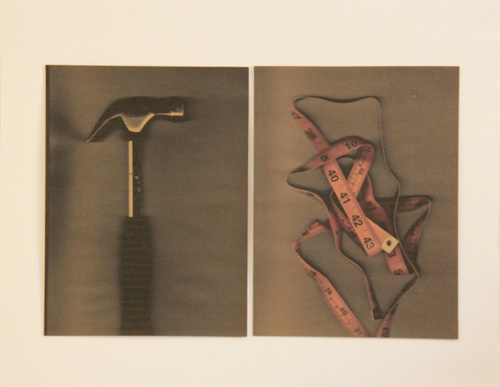 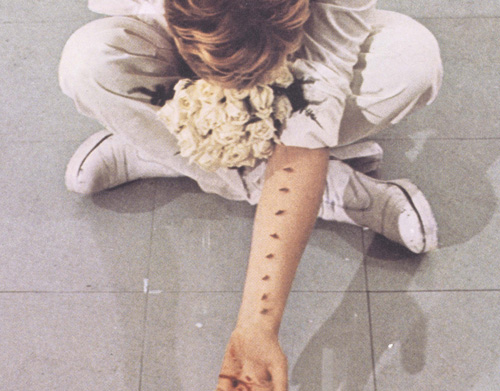 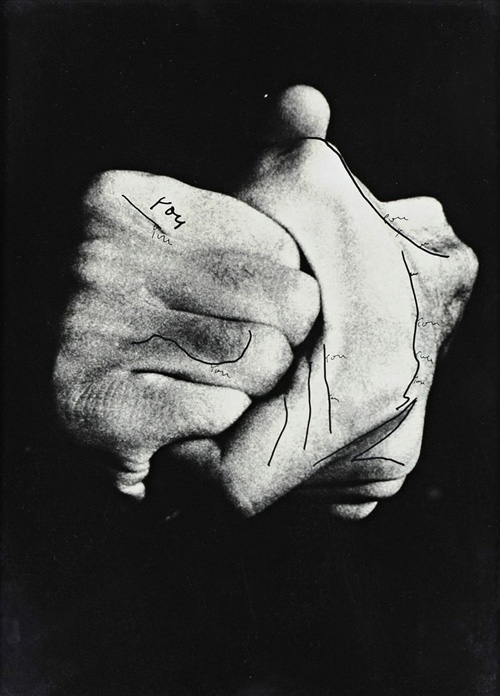 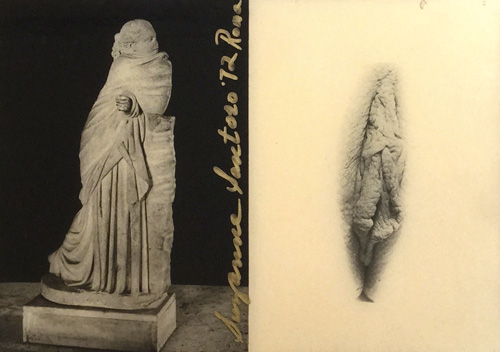 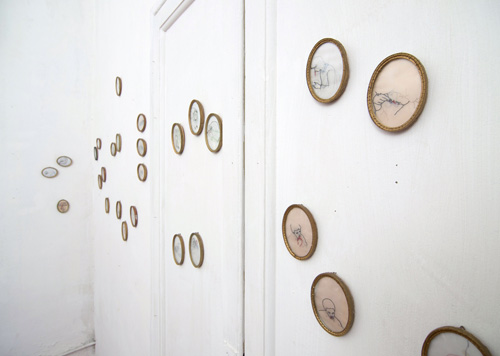