From the work of Bas Jan Ader, who disappeared while crossing the Atlantic in a tiny boat, to the political statements of Ai Weiwei, to Lucy Wood’s improbably dangerous glass trampoline, this exhibition explores risk in art

The term “risk” is thought to have first appeared in maritime insurance contracts in the 13th century. The concept has evolved with time, becoming imbued with scientific, physical, psychological, societal, political, statistical and myriad further connotations. The sociologist Gerda Reith, for example, argues that there is no such thing as risk in the world, only the dangers we construct in our heads. Artists have certainly long played with the many different aspects of risk-taking, pushing themselves and their practices and materials to the limit, letting go of control, risking harm, even deliberately causing (self-)harm – and to enjoy their works, audiences are often also invited to take some level of risk. This exhibition brings together more than 70 works from the mid-20th century to the present day, as well as some older artefacts, exploring the concept of risk in a society increasingly controlled by risk aversion, with our preoccupation for health and safety and disaster planning.

Turner Contemporary is committed to including works by its namesake in each of its shows, and, in this instance, it is no great stretch to link in JMW Turner thematically. On show are a number of the artist’s Colour Beginnings, demonstrating his experiments with the building up of layers of paint and the absorbency of paper. The small watercolour Sunset (1820-30) is beautifully sketchy, with the background sky painted in and the sun and its rays left as blank paper gleaming through. A Stretch of Sands (1820-30) is painted in just red and blue, but the risk of minimality pays off, creating a gestural imagining, capturing the spirit of the coastal scene.

The maritime theme is explored in depth in the north gallery, where artefacts such as 17th- and 18th-century journals and charts document navigation and exploration at sea. Alongside them, slides and an audiotape record the unfinished performance by Bas Jan Ader, In Search of the Miraculous (1975), whereby the artist planned to sail across the Atlantic in a 12ft sailing boat, but tragically disappeared en route – showing the price that sometimes must be paid when taking such risks.

Performance and body artists from the 60s and 70s are further prime examples of risk-takers who endangered their lives for their work. In Cut Piece (1965), Yoko Ono puts herself in the hands of her audience, inviting them to remove her clothing piece by piece with a pair of scissors. Marina Abramović and Ulay take this one step further in Rest Energy (1980), counterbalancing their own bodyweights with a bow and arrow drawn between them, pointing directly at Abramović’s heart – one slip and she would have died. How much can you trust another person, when you can’t even trust nature? Throughout the four-minute performance (shown here as a projection), the couple’s physical responses to risk – and the incipient fear – become apparent: loud and hard breathing; quickening heartbeats; sweat. Despite watching at a remove, both of time and space, these responses are nevertheless powerfully triggered in the viewer as well.

Chris Burden, another artist known for pushing his body to the limits with his often life-threatening performance pieces, is represented here by his TV Commercials series (1973-77) and a loop of three magnificent Beam Drop videos (1984-2009), in which he creates monumental sculptures by dropping immense steel beams from a crane into a pit of wet cement. By inviting gravity to play a part in the production of the work, Burden questions the hand of the artist versus the role of chance. This counterpoising of chance and risk is a thread throughout the exhibition and one picked up on particularly by Gerhard Richter in St John (1988), part of his London Paintings series, in which he builds up layers of paint using huge spatulas, before erasing and revealing earlier moments with a squeegee. The artist describes his process as: “Letting a thing come, rather than creating it – no assertions, constructions, formulations, inventions, ideologies – in order to gain access to all that is genuine, richer, more alive: to what is beyond my understanding.” By letting go of his creative control, Richter is taking a risk, as he no longer knows how the finished work will look – not even at the level of intention.

Of course, risk-taking can also be a political statement and no group exhibition on the subject would be complete without the inclusion of something by Chinese dissident Ai Weiwei. While the walls of the west gallery carry the somewhat lighter-weight selfies of Ai sticking his middle finger up at some of the world’s most recognisable landmarks (think the Sagrada Familia, the Houses of Parliament, the Sydney Opera House, the Eiffel Tower), the whole scene is watched over by the ominous marble surveillance camera in the corner – a replica of those installed outside the artist’s house and studio by Chinese police in 2009.

Andreas Gursky’s Hong Kong, Stock Exchange, Diptychon (1994) suggests the risk inherent to financial investments, while Peter Kennard’s Target London photomontages (1985), commissioned by London’s then mayor, Ken Livingstone, as part of a mass education campaign about the nuclear deterrent, cleverly subvert the protective intent, instead conveying a sense of danger and threat, hailing nuclear deterrence as a cause – not consequence – of global unease.

Sculptures dotted throughout the galleries play with tension and balance and the risk of imminent physical collapse. These include Jeppe Hein’s Ball on Pedestal (2007) and Jose Dávila’s Joint Effort (2014), a precarious arrangement of glass sheets, a boulder and ratchet straps, a choice of fragile materials further echoed in Lucy Wood’s improbably absurd glass trampoline, Can’t Play Won’t Play (1996). Tim Etchell’s red neon sign Wait Here (2008) illuminates the long, thin Irene Willett gallery, through which visitors enter the exhibition, infusing it with a sense of danger, yet intriguingly compelling those intrepid enough to enter further and, in turn, take what might prove to be a rewarding risk. This is a psychological challenge that is replicated by Eduardo Basualdo in his installation, La Isla (The Island) (2009), a wooden house structure, made from the remains of a burned-down, Argentinian home, through which visitors must find their way, in the dark, overcoming their fear of the unknown.

It is this fear that stops us humans from doing many a great thing and enjoying ultimate freedom. For artists, it is essential to face this fear and take that risk if they are to succeed in producing challenging, provoking, compelling or experiential work. The artists in this exhibition are just a small selection of those who have dared, and whose risk-taking has paid off. As Albert Camus wrote: “Art advances between two chasms, which are frivolity and propaganda. On the ridge where the great artist moves forward, every step is an adventure, an extreme risk. In that risk, however, and only there, lies the freedom of art.” 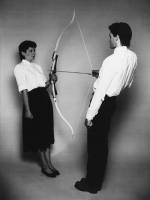 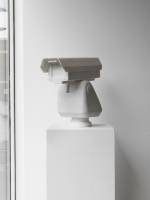 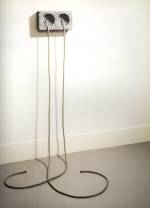 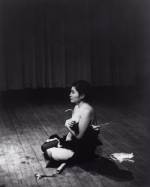 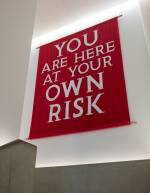