Directing a chatshow featuring a host of friends and former collaborators, Kurdish artist Ahmet Öğüt reminds us of the one thing about contemporary art that people forget: it’s supposed to be fun

Kurdish artist Ahmet Öğüt (b1981) studied painting for eight years at school and university in his native Turkey and is now based in Berlin and Amsterdam. He has presented solo exhibitions at Parking Gallery, Visual Arts Network of South Africa, Johannesburg, the Blackwood Gallery, Toronto, and Checkpoint Helsinki, while also contributing to numerous group exhibitions including the Eighth Shenzhen Sculpture Biennale, Performa, New York and the Seventh Liverpool Biennial. For all intents and purposes, Öğüt is an artist, but he is an artist who attempts to escape the restricting definitions of the very the art world within which he was educated, fleeing instead to a place more progressive and creatively rich: reality. As he said in a conversation with curator Hans Ulrich Obrist in 2012, when he was asked to give advice to students: “Don’t study art. Study something else, but keep doing art.”

This quotation perfectly sums up Öğüt’s practice, for while he makes “art”, the catalytic and defining constituent of each of his works is extracted directly from real life. A serial collaborator, he has worked alongside a mixologist, a musician, a stuntman, a firefighter, a sportscaster, a lip reader, a designer, an auctioneer and a hairdresser. These figures are never relegated, their advice taken but their presence hidden from sight, but are instead propelled to centre stage while Öğüt himself retreats to the sidelines. For Happy Together: Collaborators Collaborating, his latest commission at London’s Chisenhale Gallery, Öğüt brought together a host of these former colleagues from various professions and nationalities and staged a public discussion in a This Morning-style chatshow, the programme’s set replicated in the gallery.

With Öğüt sitting in the assembled audience and disjointed electronic duo Fino Blendax providing the soundtrack from the wings, the hosting duties are overseen by Andrea Phillips, director of PhD programmes in the art department at Goldsmiths, University of London, who – with the unfaltering enthusiasm of an early Anthea Turner and the forced smile to match – introduces each of the guests as they take to the hot seat. Our esteemed hostess has three tasks here. First, she must outline the project that the collaborators collaborated on. Second, she must ask the collaborators to outline their experience of collaborating on the project. And third – and this is where it becomes clear that Phillips’s line of questioning has been directed by the Öğüt himself – she must try to locate any complaints her guests may still be nursing, not about the project itself, but about the artist. As she states in the short preamble to the work: “This is effectively the revenge of the collaborators.”

Having listened to Dutch designer Peter Zuiderwijk describe the time he spent working on Forward! (2015), Öğüt’s recent solo show at Van Abbemuseum and “his most ambitious exhibition to date”, Phillips quickly diverts the conversation from the professional to the personal. She does not dwell on the position of design interlocutor that Zuiderwijk assumed for the project, or even the outcomes of the collaboration, but instead questions whether her guest was at all irritated by the fact that Öğüt’s name alone adorned the masthead of the exhibition. Similar questions about Öğüt’s character are posed as the other collaborators take the stand: “Did Ahmet keep in touch?”; “How much did Ahmet share with you?”; “Getting Ahmet’s approval, was that important to you?”

But while this may have been billed as “the revenge of the collaborator”, each of these leading questions is met by diplomacy and good-nature, and very little revenge is actually sought: “I was carrying Ahmet’s message”; “That’s the nature of the game we’re playing”; “It’s our work”. Even stuntman Wayne Docksey recalls his fond memories of his collaboration with Öğüt, despite the fact that all contact with the artist ended following his work on Let it be known to all persons here gathered in 2012 – a project for which Docksey rode a horse from Liverpool to Manchester, pausing at every town en route to read aloud from a Liverpool Biennial press release that had been rewritten as a Royal letter.

While some interviewees, such as mixologist Tess Posthumus, who designed a signature cocktail for Öğütin Copperland (2015), and Bora Akincitürk, one half of house band Fino Blendax and collaborator on Reverb (2015), were already acquainted with the artist, and while others have kept in touch, for Docksey and a number of professionals from further afield, their collaborations with Öğüt were not undertaken in an overtly personal way. Some saw it as a job, others, such as sportscaster Dağhan Irak, saw it as an opportunity “to do something remarkable”, but not one believed that they required any special treatment. Öğüt was friendly, but it is unanimously accepted that he was under no obligation to act as anything but a boss. No bad blood was spilled in any case.

This line of inquiry poses two questions: are the amicable responses of each and every collaborator a testament to Öğüt’s character, and in that sense does the work pander to his own ego, or do they illustrate the satisfying nature of collaborative, community-oriented work? For numerous reasons – one of which is the title of the work itself – I doubt the former, and am inclined to believe the latter, but no definitive answers can be found here for the simple fact that the work does not seek them. With no accusations to throw or opinions to be broadcast, all that the project aims to formulate is a genuine and objective diorama of the artist/collaborator relationship, and it is this very natural, motiveless substance that lies at its heart that makes the work so refreshing.

Ultimately, there are many good things to say about Happy Together: Collaborators Collaborating. It interrogates the significance played by art in the everyday society; it draws attention to the oft-neglected process of art; its meta-artistic profile allows a self-critique of the work itself; and so on and so forth. From this point onward, each of these statements may be iterated in numerous publications and extensively considered, and rightfully so, for they are all reasonable and potentially fertile hypotheses. But for me, personally, the best thing about this work is the fact that it doesn’t take itself too seriously. In fact, it downright refuses to. Like each and every project that is described in the chat show itself, Öğüt knows that Collaborators Collaborating will not be life-changing, just as it will not be strenuous or maybe even important. But what it will be, at the end of everything, is fun – fun for both the artist and the community of normal people with normal jobs that come to be involved. It will just be fun. And what better indicator can there be of the positive power of contemporary art? 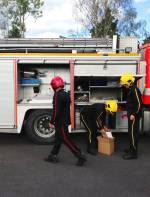