Edition 2019 looks great, goes wide and speaks loudly, but is it off mission? Lost in this bi-coastal perceived zeitgeist of identity politics is an unbiased survey of art-making with no agenda but the deep need to make it, and of the artists working in America’s backwaters 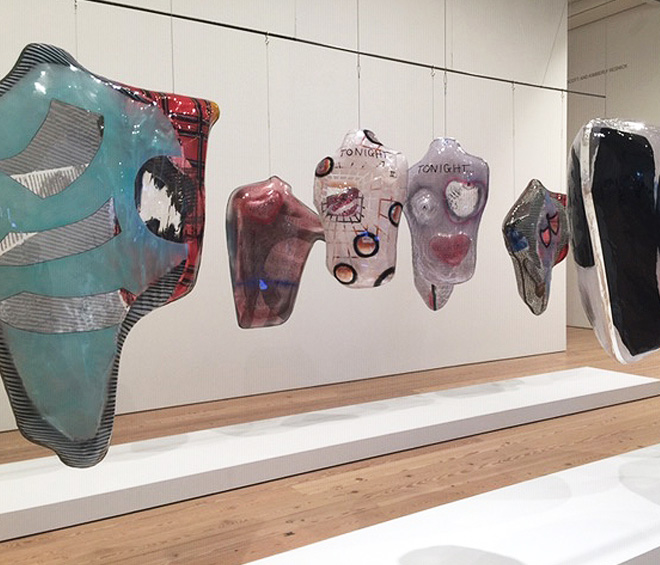 The three-year hiatus mandated by the Whitney Museum’s big move downtown has thrown its biennial survey in sync with the Venice Biennale, unfortunate in the comparison that same-naming invites, as well as the expectation of a wide footprint that the Whitney, restricted to one building, can’t deliver. The punch, therefore, has to come from curatorial excellence and the quality of material selected.

Inhouse curators Jane Panetta (a biennial veteran) and Rujeko Hockley (a first-timer) do deliver a punch, but one disturbingly far from the Whitney’s stated mission, which – in director Adam Weinberg’s words – is “to propel the dialogue of art forward”, to give “artists with no gallery a foothold” and to deliver a frontline report on “what’s going on now in American art”. To that end, they would have us believe, the two curators crisscrossed our vast nation for two years “with no set formula or preconceived notions except to report on the zeitgeist of the era”.

The question is how did they determine the zeitgeist and how close have they come to the Whitney’s broader mission – to scout talented artists who don’t have a gallery and to mine a wide spectrum of work for a thoughtful survey of how, and by whom, art is being conceptualised, made and advancing the visual vocabulary in today’s America? Their answer, concerning both zeitgeist and artists selected, is a not-so-fresh, not-so-representative, take on an America preconceived.

Of the 75 artists selected, two are dead, at least 25 are over 40, 71 have a gallery (some have three), several are already placed in collections (even the Whitney’s), 24 were born, raised or work outside the US, and 11 are based in California and 42 in New York.

Chasing a zeitgeist places the curatorial finger less on the pulse of art that is made from an inner urge, as has been its history, in order to ravish the eye, open the heart or stir the soul (see the glorious Tintorettos now showing at Washington DC’s National Gallery) than on art as the skilfully crafted expression of what is going on. The resulting exhibition drills down duteously on the day’s hot-button issues of racial discrimination, environmental degradation, immigration and varying interpretations of “diaspora”, real or imagined. 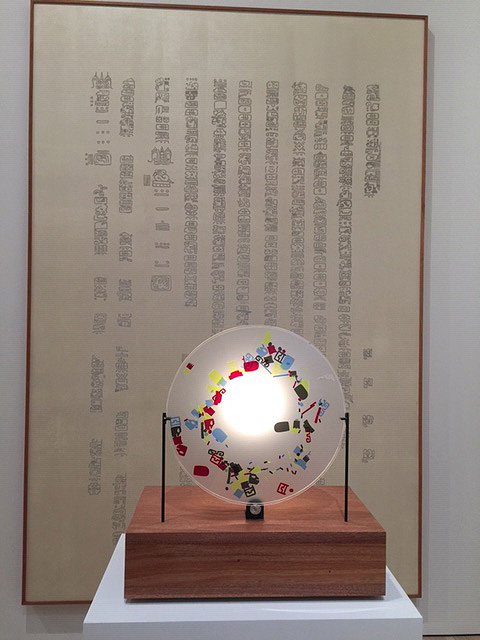 Or Wangechi Mutu, born in Nairobi, with studios there and in Brooklyn, whose android female forms draw on materials from both cultures to recreate oral histories disrupted by colonial intervention. And Maia Ruth Lee, born in South Korea, whose Bondage Baggage Prototype 4 (2018) , strangles the belongings of migrant workers with rope, tape and tarp to convey the suppressed self and economic oppression. 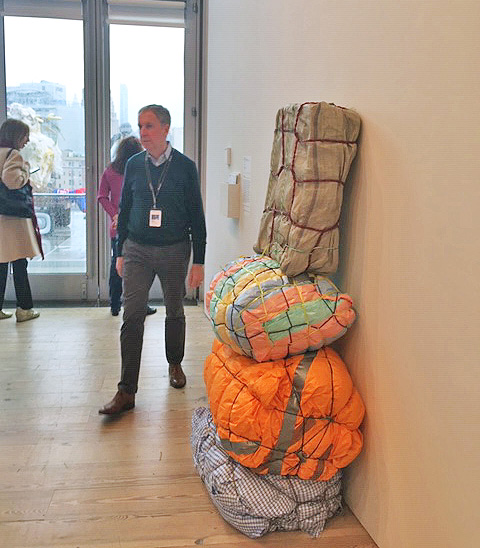 Even artists born and bred in the US appear to merit inclusion as much for identity rooted elsewhere. Their multilayered investigations are all worthy and urgent, working stubborn materials into message-laden scenarios and tour de force manifestos. Their significance will be lost on you, though, if you don’t take time out to read the lengthy wall captions – interpretive guidelines on the order of stage directions that have to be posted to clarify sources. 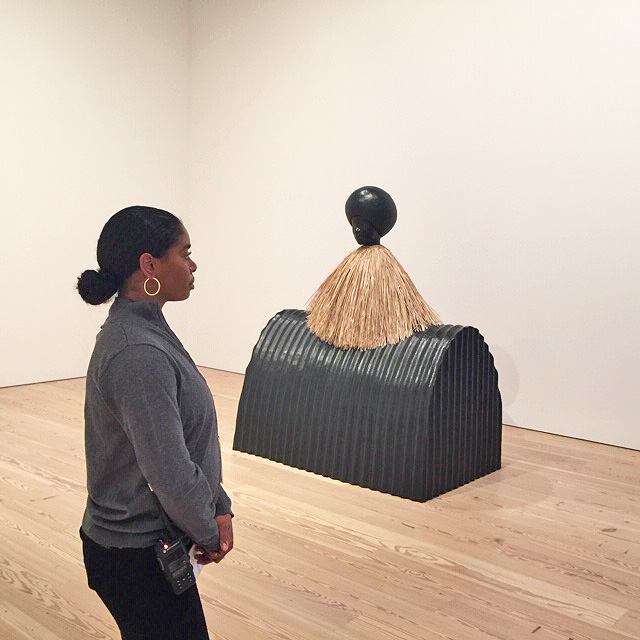 That said, there is much here to ponder. Although it doesn’t magnify their power, it deepens it to read that Simone Leigh’s massive ceramic and bronze portrayals of female endurance braving Jim Crow-era prejudice were inspired by Ancient Egyptian forms, West African adobe structures and American craft. The elaborate manipulations depicted in Josh Kline’s digital C-prints fully convey post-humanist meltdown, but it adds to the unease to learn they were fashioned to actually melt. 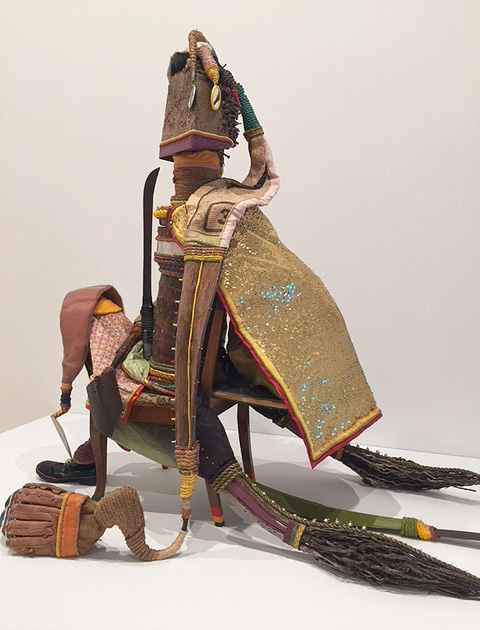 It is interesting, too, to see elements that were introduced to the American canon by white guys receiving a cultural makeover; how the African-Puerto Rican artist Daniel Lind-Ramos, say, rethought a Rauschenberg combine. The problem, of course, with reworked formulae and allusion is that they intrigue, but don’t rouse. Best to go to this biennial to see not to feel. 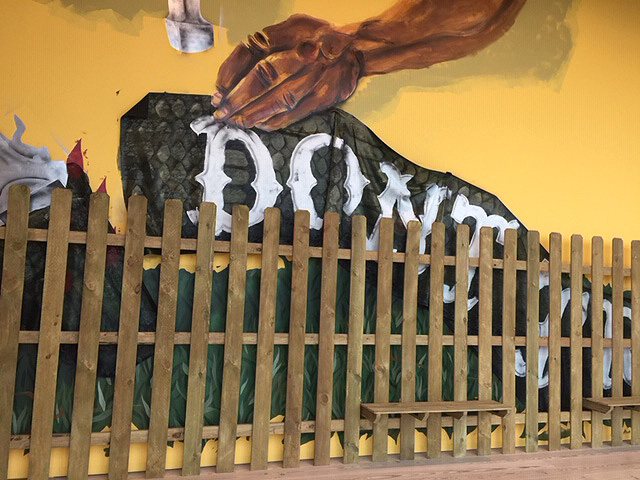 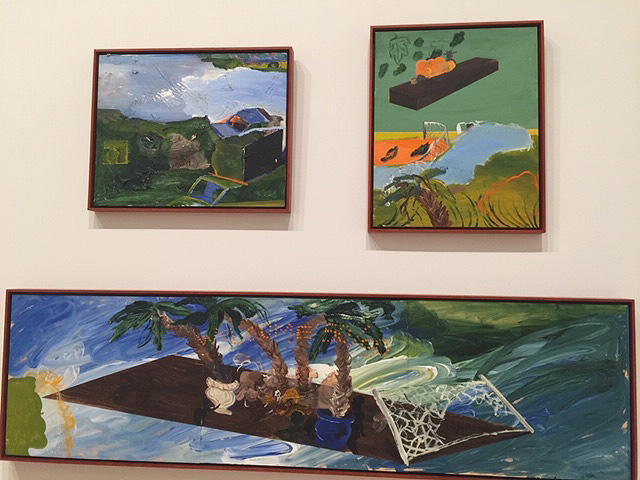 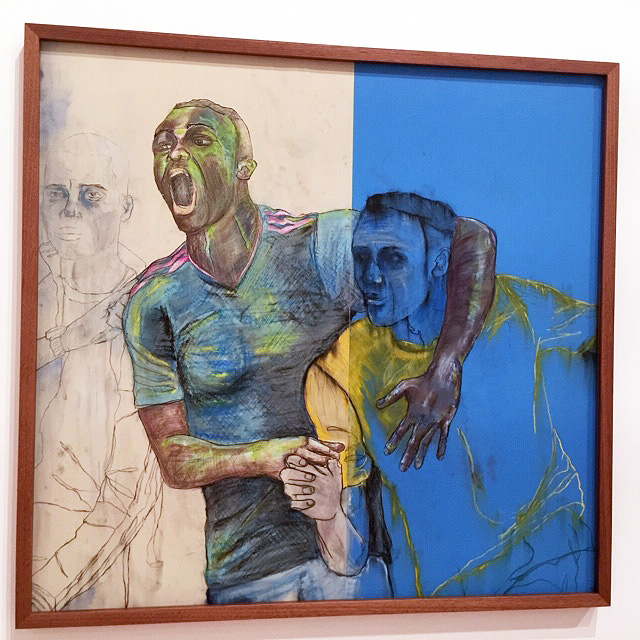 Photography is given generous wall space; most arrestingly with Todd Gray’s framed combines worked from the lush foliage surrounding his studio in Ghana and paparazzo takes from his years photographing Michael Jackson; most disturbingly with Elle Pérez’s frontal closeups of  body mutilation; most masterfully (it’s his second biennial) with the familiar studio portraits composed or overseen by Paul Mpagi Sepuya.

Curtained-off videos sideline you for up to 36 minutes to view a strident exposé of corruption and brutality by the Mexican collective Colectivo Los Ingrávidos, a confessional pop-genre mashup by Canadian Indian Thirza Cuthand exploring the marginalised “weirdo” identity of such as indigenous teenage lesbians, and the latest of Sam Green’s “live” documentaries, which tracks the queer counterculture through the life of one of its seminal figures. Lingering in memory, Apache artist Laura Ortman’s thoughtful meditation, My Soul Remainer (2017), on the interaction of a sophisticated composition for violin with the natural rhythm of water and, on the Whitney’s signature fifth-floor elevator wall, a gripping animation sequence depicting Colin Kaepernick’s offensive (the question here is, to whom?) protest decision to kneel during the national anthem.

Sport gave two other artists a way in. Infusing paint with glitter, Jeannette Mundt’s Born Athlete American Simone Biles I (2017) conveys the flash, both of movement and fame, which puffed America’s proud Olympians before the sexual abuse scandal that felled them. One of four looming canvasses by Calvin Marcus showing a boxer hovering over a weightlifter (Ghost of Younger Self, 2019) riffs on the fallout of ageing.

As for disciplines and techniques, there is something for everyone. Conceptual art groups Matthew Angelo Harrison’s tribal spears – their ancient power neutered by industrial Plexiglas, and fills an entire gallery with Agustina Woodgate’s National Times (2016-19), a clever meditation on time (all the world is in sync until – twice – it isn’t) drawn from 24 clocks, their hands backed with sandpaper to slowly, over the span of the show, erase the meaningless human construct of hours.

Installation weighs in with elaborate statements; Brian Belott’s three Dada iterations of Untitled (2018) freeze rescued ephemera in ice to suggest what, when we are gone, will represent us. With the pared-down forms of a black-and-white dome, a copper bullet and a looped-wire spirit-goddess, Iman Issa’s Heritage Studies (2016-19) reimagines historical artefacts to show how their power shifts when put on display. Taking up the entire ground floor gallery, a 36-year mini-survey of Chicago imagist Diane Simpson’s superbly accomplished constructions – all referencing clothing and architecture and each built from a drawing – combine wood, metal, fabric and paper to brilliantly convey the subtle interplay between intimate and formal, domestic and industrial, body-hugging and monumental.

Several works are overtly political. Some, such as Joe Minter’s ’63 Foot Soldiers (1999), involve clever aggregates of found and worked materials; some rely on sound; Marcus Fischer’s Untitled (Words of Concern), 2017 activates a tape that spouts looping anxiety about the Trump presidency. Most literal is Forensic Architecture’s Triple Chaser (2019).  Kudos to the Whitney for inviting the collective to comment unreservedly on the ongoing protest demanding the resignation of board member Warren Kanders, whose company manufactures tear gas. But painfully missing, as in so much of the work here, is art’s heart – the sine qua non of aesthetic emotion that should define it. Christine Sun Kim’s murky sequence of lithographs addressing “Degrees of Deaf Rage” graphs frustration too conceptually; an inordinate 20 screenprints and photolithographs by Alexandra Bell excoriating sexual assault channel Warhol too closely, and Martine Syms’s lettered, painted installation framing a video that spells out “emotion” is defeatingly hard to read. 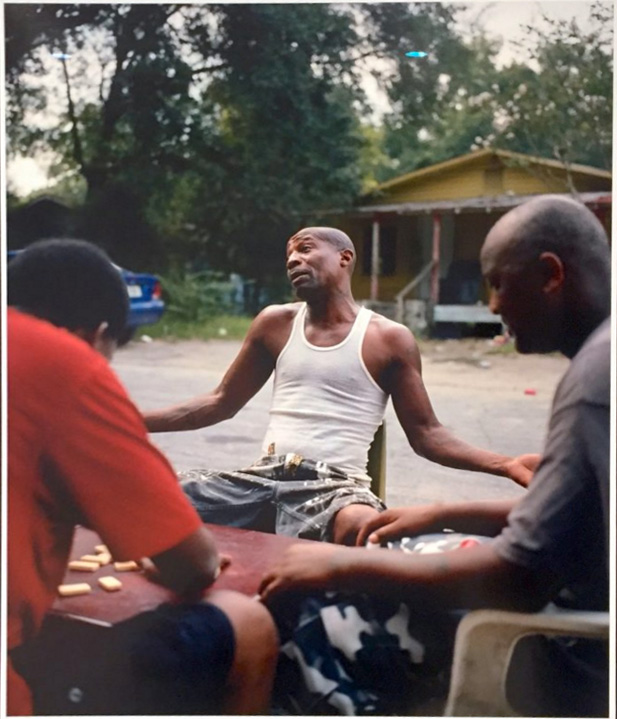 The exceptions, all unexpectedly moving, perhaps because I was so fixated on discovering the truly American voice, are all by artists born and rooted here. The photographs of Curran Hatleberg – given their own floor – present, at first glimpse, as trashed utopias, but on closer viewing impart the deep ache of a nation’s lost innocence and everyday disappointments. Collaged abstractions by Tomashi Jackson stamp statement objects on to the discarded street detritus of wrappers, bags and fliers to champion the discarded, displaced and remaindered “human detritus” cast into the streets by deliberate or misguided government programmes. Miami’s Eddie Arroyo’s four deceptively charming renderings of the same cafe through the years lament the progressive gentrification of his predominantly black/Latino community.

Happily, this prevailing view of the American condition as one of anxiety, despair, rage and a dystopian future is balanced by an irrepressible exuberance resulting from the exhibition’s strong focus on performance. Until recently an add-on as insurance against any discipline overlooked, Performance is now front and centre (telling that it has claimed the Venice Biennale’s top prize twice in succession) and takes pride of place here with seven works scheduled throughout the show’s duration.

Standing before The Master and Form (2018/19), by Brendan Fernandes, which interlocks five dancers on a jungle gym as the wind ruffles the grasses on the terrace behind them, I thrilled to the juxtaposed movements of body and nature. Show times are limited, though, leaving the biennial to be measured by its material offerings.

For those interested in work that is technically accomplished – much here is remarkable for the depth of research and skilled manipulation of the materials that layer the message – it’s a biennial not to be missed. The overriding takeaway is a solid show planned top-down with a preconceived agenda that speaks to control; curator control over what constitutes the current zeitgeist and artist control over how to manipulate the perceived zeitgeist for what is currently selling. Investment collectors will need to drop in; there is no doubt that each of the 75 artists represented here will receive a big boost from inclusion in a Whitney Biennial – the proof of the pudding, though, will be in how many will place 10 years hence in the same museum if not in the same show as a Tintoretto. 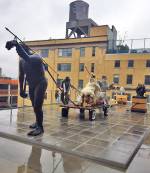