There are some loud voices vying for attention in this colourful celebration of the human figure. Bringing together the works of 19 emerging international artists, Body Language plays with the corporeal, stretching, squashing and chiselling the human form to produce works that range from the gruesome to the ethereal.

For any artist wanting to represent the human form, the spectre of art history will be hard to escape, a point that this exhibition proves. Picasso, Francis Bacon, Otto Dix and even Renoir all haunt the galleries, thinly disguised in the vast canvases and dripping paint. And in this post postmodern age, achieving a fresh angle on the human figure is no mean feat. Perhaps partly in compensation for this, many of the works in Body Language are oversized, brash and unsubtle, but also, in some cases, deeply thought-provoking.

With more than half of the artists hailing from the US, the exhibition can, at times, feel like an American art show. On entering, we are greeted with Henry Taylor’s large canvases that boldly engage with street life stateside. Image and text combine to reveal snapshots of the lives of individuals whose faces are sometimes obscured or left blank against unmistakeably American urban landscapes. Other artists hail from as far away as Moldova, Russia and New Zealand.

Japanese-born Makiko Kudo’s work, as large as, and even more vibrant than Taylor’s, bears clear references to her homeland. The figures in her paintings recline, float and tumble through busy fantasy landscapes, each with the unmistakable characteristics of manga comic book characters. Floating Island depicts one such blue-haired figure lying across a white swan, surrounded by a patterned frame of greenery that is more than a little reminiscent of a Peter Doig. Kudo’s paintings are at once seductive and hypnotic, like a Hayao Miyazaki film, while also tinged with a sense of melancholy and isolation.

The work of Russian photographer Denis Tarasov and the installation of New York artist Marianne Vitale are displayed as complementary exhibits exploring both the human image in death and the bodily absence that death brings. In the centre of the room, rows of grave markers, which Vitale constructed using reclaimed wood from a New York lumber yard, stand scarred but proud like a legion of returning soldiers. Both sombre and touching, these wooden memorials are in some ways more apt representations of the dead than their stone counterparts. Once living organisms, they show the marks of life and retain the potential to decompose. As a result, they seem strangely detached and incongruous in the sterile gallery space.

Watching over Vitale’s grave markers, but occupying the other end of the commemorative spectrum, are Tarasov’s photographs of granite headstones from Russia and Ukraine. Each shows a painstakingly engraved image of the deceased, some nonchalantly leaning against expensive cars, others sporting gold jewellery and sharp suits. They resemble characters from films or soap operas dressed in their finest at the dinner table or with the iconic onion domes of Moscow providing the backdrop. Unlike the uniform wooden markers, which bring to mind anonymity and perhaps poverty, these shiny headstones are a vivid expression of how the dead wanted to be remembered – as wealthy, successful and defiant in the face of death.

Monuments of a different kind take the form of two of Kasper Kovitz’s witty Iberian ham carvings. Each is a fleshy bust balancing on bony protrusions set into a base of concrete. These macabre items are portraits of Sabino Arana and Miguel de Unamuno, cult figures in the Basque struggle for independence. The title, Carnalito, is a Spanish word meaning close friends or brothers, the root of which is carne, or meat. These crude cameos then have both an air of the erudite and the grotesque.

In sharp contrast to the more macabre aspects of Body Language (Andra Ursuta’s tragic flattened bodies being perhaps the most extreme example) sit the paintings of Jansson Stegner in which young women gaze into the middle distance surrounded by flowers in otherwise empty landscapes. These paintings may, at first glance, seem overly sentimental until you notice the batons and the police uniforms. The exaggerated femininity of these long-limbed sirens points to caricature. Jansson has cited varied influences, ranging from comic books to El Greco, Ingres and Egon Schiele among others, seeing his work as a continuation of this long tradition of figurative distortion. These paintings, he says, are the opposite of portraits. They are composites of features from several individuals that come together to form an idea of a person rather than an actual likeness. These women are fantasies then, strange and ethereal beings sporting the trappings of authority; they are very much female cops seen through a man’s eyes.

Some of the works on display in this vast showcase seem deliberately and wearily to look backwards. Michael Cline’s pseudo-moralistic street scenes recalling German interwar painting and Nicole Eisenman’s caricatured crowds seem particularly dated, while others ride trends celebrating the current obsession with all things vintage; Amy Bessone’s paintings of kitsch ceramics call to mind Michaël Borreman’s darker equivalents. There are, however, engaging and original works in Body Language serving to remind us that plucking influences from the past, or even the present. is one thing, but what you do with those influences is quite another. 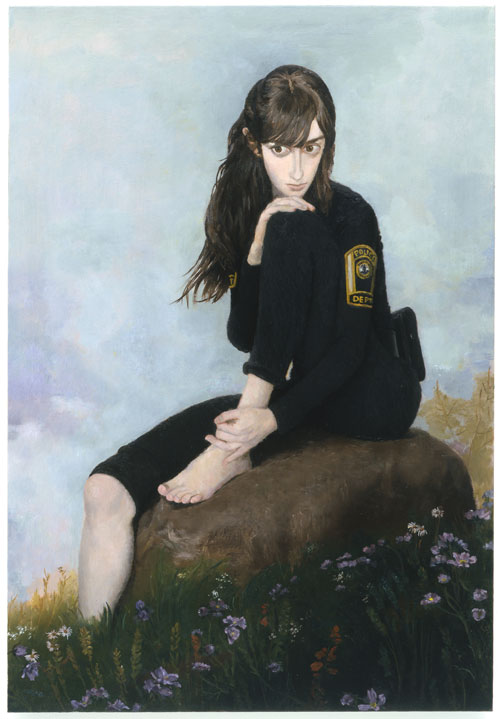 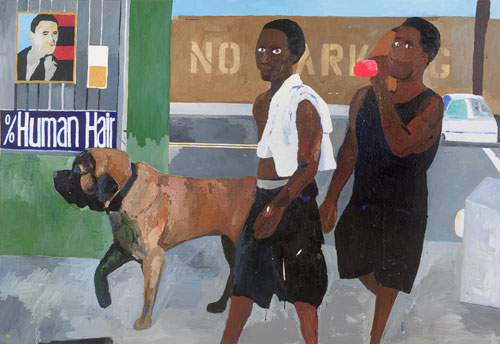