“Great artists have no country,” Alfred de Musset famously wrote, in what is often seen as a rejection of nationalism. If we accept the premise, where then do great artists exist? Where is this other place? Do artists belong, by implication, to all countries? Or are they, at the risk of cliche, perpetual outsiders, exiles, wanderers? It is fitting that the title of this superb exhibition of Peter Doig’s work derives from another nomad from the same “hometown” of Edinburgh – Robert Louis Stevenson. “There are no foreign lands,” Stevenson wrote in his Californian travelogue The Silverado Squatters. “It is the traveller only who is foreign.”

Doig was born in Scotland, worked on oil rigs on the Canadian plains, studied in London, taught in Düsseldorf, and has lived for the past decade with his family in Trinidad. Despite this, or because of it, he has been labelled a painter of “elsewhere”. In a recent interview with The Telegraph, Doig revealed: “I’m just one of those people who don’t feel they’re from anywhere.” While Trinidad is ostensibly the setting for the large oils and sketches in this exhibition, it is a Trinidad viewed through a veil of memory or dream, a Trinidad rendered sometimes vividly, sometimes ethereally.

Critics often fall into the trap of locating and listing the influences in Doig’s work. No artist is an island and, to paraphrase Borges, every artist “creates their own precursors”. Traces of antecedents are easy to identify. We might see the influence of Pop Art via Jasper Johns in a work such as Painting for Wall Painters (2010–12), or a skewed David Hockney in Ping Pong (2006–8) and Walking Figure by Pool (2011). We can detect Gauguin in the riots of vegetation in Pelican (Stag) (2004) and Grand Riviere (2001–2), or Matisse in the sporadic explosions of striking colour in the magnificent Cricket Painting (Paragrand) (2006–12), for example. The latter also echoes Doig’s beloved Norwegian neurotic genius Edvard Munch, particularly in the amorphous forms of sea and land. By comparison, Mal d'Estomac (2008) seems a combination of Munch and Mark Rothko. We can uncover the shades of Emil Nolde in his portraits and Edward Hopper in his use of atmosphere and light. What this artistic stocktaking does, though, is simply demonstrate the critics’ flailing attempts to impress and to comprehend. Yet the very essence of Doig’s work is elusiveness, mystery, the ability to evade any definitive understanding. In this way, Doig is a profoundly poetic painter.

Every landscape is a portrait of its viewer. In Doig’s scenes, you can view wonders or read foreboding auguries. It is Doig’s great strength to make these possible simultaneously. The paintings may inevitably be static, but the feelings they arouse are protean. On initial viewing, Cricket Painting (Paragrand) appears a relatively dynamic depiction of children at play. On further examination, it appears much less innocent; the ghostly semi-translucent figures seem eerie, like figures in a dream or conjured up in the miasma of memory. Doig has claimed that he rarely paints scenes directly, but uses found images, postcards and earlier sketches or photographs. In this sense then, these are ghosts he is painting. They, and the scenes they are in, have long disappeared by the time of painting. Change, whether it is the weather or light or human beings, is an unacknowledged presence continually at work.

At a time when conceptual art was thought to have consigned painting to ineffectuality, Doig’s art has prompted a reassessment not only of the skill and aura of the works themselves, but of their storytelling capacity. There is an evocative openness to a painting such as Music of the Future (2002–7), which suggests much more than it visually portrays with its dark nocturnal electricity of colour. Gazing at it, you can almost hear the soundtrack of voices, music and water. It could be the scene of terrible crimes or clandestine wonders. Doig trusts the audience enough to make them accomplices, providing only the beginning of the tale, the opening stage directions, and allowing the viewer to imagine what might transpire, the how and the why. He is in the business of creating mythologies, a skill that makes much conceptual art seem superficial and abrupt by comparison.

We observe in his artwork the strangeness of places, or rather those perceiving them, filling in the vast blanks with our own stories. We might have foreknowledge that Dark Child (2007)is based on an unsettling incident in which Doig’s daughter vanished in the rainforest, but is the figure in this depiction alive or dead? Who is the bearded gentleman in 10 Years Ago (2001)? Is he a castaway or an explorer? Where is he is going to or coming from? Is his look one of curiosity, fear, bewilderment or something more menacing? Who is the Girl in White with Trees (2001–2)? What transplanted urinal or pickled shark could compete with the infinity of imagination that Doig taps into with mere pigments?

Occasionally, Doig’s painting moves towards abstraction, in so much as life itself sometimes moves towards abstraction. Black Curtain (Towards Monkey Island) (2004) is the world turned opaque or viewed through a net curtain. As with his earlier The Architect’s Home in the Ravine (1991), Doig finds the dreamlike and sinister, as well as geometry, in the natural world – or rather the environment suggests it to him. At times this tendency to abstraction seems only partially successful. House of Flowers (see you there) (2007–9) looks scrappy, but becomes intriguing on closer viewing; the limpid figure bearing what looks either like petals or ulcers on its flesh. Again, it comes back to our own interpretations. If the jungle looks threatening, it is because we are deciding to see it that way, subconsciously or otherwise. Doig affords us the space and the starting point to do so, to roam as he has before us. 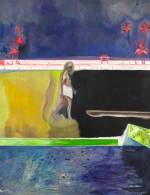 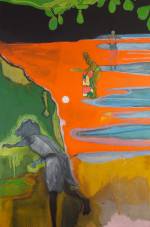