Bloomberg New Contemporaries 2013 opened at the Institute of Contemporary Arts with the customary fanfare that accompanies this annual selection and exhibition of the work of recent fine art graduates.

Artists Ryan Gander, Chantal Joffe and Nathaniel Mellors collaborated to blind-judge the best artists emerging out of British art schools over the past year, the central criterion being the potential their work shows as they come fresh-faced on to the national and international art scene. These graduates merit the slightly contradictory label “new contemporary”: artists who will, in the future, define the present.

It is difficult to critique such an exhibition, mainly because, as Gander points out in the exhibition catalogue, it is not curated. The works are not subject to interpretation by an overriding theme, or to pompous declarations about trends in contemporary art. Without such narratives, every work possesses the blissful innocence of the prodigy, a purity sure to be eroded as soon as success comes to call. With each artwork offering a vignette into the future that does not bear relation to that of its co-exhibits, and with their creators poised in this position of vulnerable excitement, it only seems right for a critical audience to partake in further selection – to choose the best of the best – rather than ranking and comparing the chosen artists, a practice that the judging process itself eschews.

In a firmament of the brightest stars, there are five who are clearly rising. Royal Academy postgraduate Rebecca Ackroyd’s Scruff (2012) is undoubtedly the show’s most compelling work, though only on very close inspection. Resin casts of rectangular panels that bear a further pattern of rectangular reliefs across them have been carefully rubbed with graphite to form solid masses of entirely matt surface. A cheap silver necklace has been delicately draped, almost incidentally, over the top right corner of the right-hand panel. While the panels speak of a laborious process of layering and smoothing-over, the necklace represents the completeness of factory-produced, shiny objects. Each retains its textural integrity until contrasted with the other, a contrast that results in the mutual aesthetic dissolution of both parts.

Konquiz (2013) by Ophelia Finke (BA, Central Saint Martins) is similarly unexceptional until seen up close, mainly due to its size. It consists of a wooden plinth offering a micro-display of semi-abstract things: clay and Plasticine shapes, found matter, bones and miniature wooden sculptures. The anonymity of the objects in this personal museum brings to mind a contemporary cabinet of curiosities. But this cabinet prioritises the fetishising of objects over the inherent value of the things themselves, allying it more to a child’s collection of misshapen, cheap, dirty items that it’s easy to imagine a parent attempting to throw away without respect for the personal attachment that the child has built around its components.

Chelsea College MA graduate Lana Locke’s Untitled (orange netting) and Pumpkin (both 2012) likewise consist of found and made objects that resemble rubbish-tip detritus. As with Konquiz, the epoxy glue, spray paint, hair and parcel tape have been combined to look like fetishised, organically constructed forms with a mysterious, potentially dark undercurrent. Part scarecrow, part voodoo mobile, they stand in the space as testaments to the “new contemporary” appetite for the handmade readymade: the paper-thin latex mimicking dried meat and mouldy leaves, for instance, blurs the boundary between the natural and the artificial, eliciting a kind of ersatz disgust in the viewer that is perhaps British art’s new “shock of the new”.

Alongside this is an emphasis on layering and texture that recurs throughout the show. inverse/obverse (2012) by Roman Liška (MA, Royal College of Art) consists of two overlapping framed pieces, one photographic, the other of molten metal. At first, the photograph appears to be a macroscopic representation of the molten metal panel, zoomed in to show its complex substructure. But the molten metal, which in its dripping texture and shape resembles images of bacteria or the furry undulations of soft furnishings seen through a microscope, could equally be a macroscopic representation of whatever it is that the photograph shows. The inverse and obverse are left unallocated in an unending narrative loop.

Though painting is well represented in the show, sculpture clearly excels, and Royal College of Art MA graduate Marlene Steyn’s oil and mixed media canvas The Handsome Pool Party (2013) compounds the best of both in one impossible world. Escher-esque staircases merge with archways and houses to lead the eye on a wild goose chase of logic-seeking. As if seen through multiple glass sheets, solid objects blend with ghostly reflections. A Plasticine sculpture brings this confusion to a conclusion at the top right-hand corner, its three-dimensionality a relief for the eye after coursing through those multitudinous visual planes. But it also brings the painting’s unreality into a neat but perturbing intersection with our own.

Among the many other artists in the show several others stood out, but column inches are better spent on detailed reflection than on concise lists of favourites. Suffice to say that the new contemporary art world will be refreshing and introspective, if not visibly innovative. Yet what is originality but the sum of the past recast, rethought, even rejected in pursuit of the current and the relevant? The new is rarely new, but it is, by definition, always exciting. 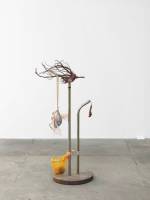