The exhibition of Julia Margaret Cameron’s portraits and allegorical scenes currently on view at the Metropolitan Museum of Art is both welcome and disappointing. Welcome because it is high time that the museum showed the work of this pioneering British artist (1815-1879), fixed as it is on the world of fantasy, faith and imagination as it intersects with photography’s innate quality of capturing facts. Disappointing because the first exhibition of Cameron’s work at this institution omits a crucial, albeit somewhat irksome, part of Cameron’s oeuvre – pictures of nude, seminude or otherwise provocatively exposed children.

Whatever the reasons behind this decision, the result is an exhibition that flattens out a complexity in the photographer’s work that could be called decisive for its interpretation. As Carol Armstrong argued in her now classic text about the artist, Cameron’s distinctive style, characterised by soft focus, obscured detail and attention to the photographic process, was not an idiosyncratic choice of a middle-aged materfamilias striving to distinguish herself from her male peers. It was an ideology of sorts, inseparable from the artist’s Victorian sensibility and her deeply held religious beliefs. A child pornographer Cameron was not, but she did identify photography with creation akin to maternity, in a peculiar allegorical symbiosis that blurred the distinction between a man-made, artificial contraption and biological processes.1

The small exhibition of 38 works, organised by Malcolm Daniel, senior curator in the museum’s department of photographs, tells us a different story. In the absence of a catalogue, we learn necessary information through wall labels, which clarify the exhibition’s ideas and sustain its meaning. The photographer’s short biography, displayed at the entrance, charts her wealthy upbringing in Versailles and colonial India, her successful marriage to an established man 20 years her senior, their six children and influential social connections. The museum’s website explains that “the exhibition features masterpieces from each of her three bodies of work: portraits of men … women … and staged groupings … “The wall text next to an enlarged portrait of May Prinsep, Cameron’s niece and model, informs us that the artist was “the greatest portraitist in the history of photography” and that this is, indeed, an exhibition of portraits, comprising, we may assume, the “staged groupings” under the category of portraiture. This thought confounds because, conceptually, these two genres stand as far apart from one another as we can imagine, allegory being based on an uncertain, but nonetheless important category of fiction, and portraiture on observed facts. To conflate the two would mean to have either the fictitious or factual aspect of the work preside over its interpretation. The exhibition clearly foregrounds fact over fiction.

The entry room introduces us to the artist through wall texts and photographs by people from Cameron’s environment, including several portraits by David Wilkie Wynfield (1837-87) and Oscar Gustav Rejlander (1813-75), who were Cameron’s teachers and examples of professionalism against which she could measure her own work. There is also a family connection – a portrait of Cameron by her youngest son – as well as an allegorical scene of Don Quixote in his Study by William Frederick Lake Price (1810-96). The wall label advises us that allegorical scenes, as well as portraits, were popular subjects among early photographers, and that Cameron adopted their subject matter, but turned away from her predecessors’ precise and descriptive narrative style to make more “emotional and spiritual” pictures. In other words, there was a professional precedent for any one of her initiations in photography, which influenced her thematic and stylistic choices through either her attempts to emulate them or, on the contrary, her reacting against them.

This introduction tells a true story, but not the whole story. Apart from the professional lineage, Cameron’s personal life was as important in the genesis and evolution of her photographic work: her family, faith, social circle and Victorian values. This aspect of her practice figures at the exhibition, but not as prominently as the professional one. From the introductory text we learn that the very appearance of the photographic apparatus in Cameron’s life was a casual and domestic affair: it was a present from her daughter when Cameron was 48, a retirement age for homemakers in those days. The initial purpose was to provide her with a pastime. Instead, it turned into an obsession for the next 10 years of her life: “From the first moment I handled my lens with a tender ardour … it has become to me as a living thing, with voice and memory and creative rigour,” the wall text cites Cameron. Apart from this avowal by the artist, the exhibition does not tell us how the idea of a camera as a “living” – that is, supernatural – thing guided her decisions in the choice of models, setting and staging and the actual making of her photographs. Instead, we see a selection of images that leads us in a systematic fashion from the portraits of the men she admired – “great thro’ Genius” – to those of women – “great thro’ Love” – and the staged scenes towards the end.

In these portraits, we observe the subjects’ real and imaginary existence as Cameron’s friends and family or as heroes and heroines of epic or romantic poetry. One after another, we see the pensive and spirited faces of poets Alfred Lord Tennyson, Philip Stanhope Worsley and Henry Taylor, historian Thomas Carlyle, musician Herr Joachim … Cameron knew most of these men closely but, before all, she admired them to the point of adoration. One of the most “loved and honoured” men from Cameron’s milieu was mathematician and astronomer Sir John Herschel, who told her, incidentally, about Henry Fox Talbot’s invention of photography. Perhaps because of her admiration of these men’s greatness, she never used them as actors in her allegorical scenes.

Her family, women friends and domestic servants were portrayed differently. These include images of her husband, Charles Hay Cameron, a jurist – as himself, as the wizard Merlin from Lord Alfred Tennyson’s Idylls of the King, and as King Lear surrounded by his three daughters. He always looks regal, even when not portrayed as a king. There are also images of her photogenic nieces, Julia Jackson – as herself – and Prinsep, also as herself and as a stand-in for heroines of poems by Byron, Coleridge and Shelley. In general, the more familiar the person to Cameron in domestic terms, the more likely he or she was to become a subject of an allegorical transformation. For example, an alluring Mary Hillier, Cameron’s parlour maid, was a constant presence in her allegorical scenes, especially the ones with children. Of numerous allegoric scenes with Hillier, the exhibition shows one, La Madonna Riposata of 1865, in whichthe maid, modelled on the Mother of God in an Italian Renaissance painting, is holding a sleeping child.

There is a curious relationship in Cameron’s images between domesticity, femininity, instrumentality, technology and religious calling, related to the question of how a Victorian woman saw the world in allegorical terms. The exhibition skirts this question in favour of a more streamlined narrative. We could expect better from the Metropolitan Museum of Art. 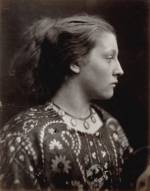 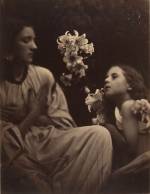 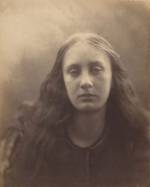 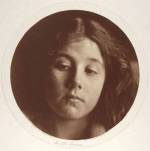 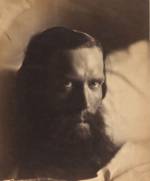 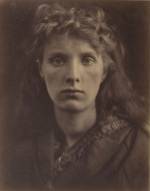 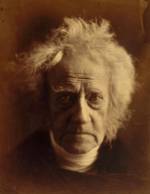 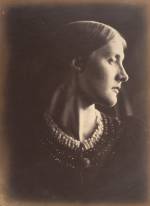 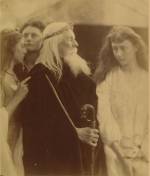 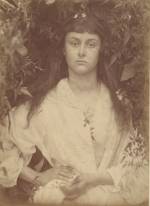 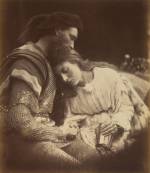