Imran Qureshi at the MET

Imran Qureshi at the MET

The Pakistani artist Imran Qureshi, who was voted Artist of the Year in 2013 by the Deutsche Bank Global Art Advisory Council, debuted at the Metropolitan Museum of Art with a large-scale installation on the museum’s roof. Words can hardly do justice to this piece, because its effect is derived entirely from the viewer’s immediate experience of being placed in the midst of the work and not from contemplating it from aside, or from knowing things that do not belong to this direct experience.

The first impression is that of bewilderment: instead of the expected art, the visitor sees the entire roof covered in splatters of blood. Gathered up in small pools in some spots and thinned out to the point of tiny drops in others, this dried-up liquid with deep purplish tint makes a leisure spot beloved by many New Yorkers look like an abandoned scene of carnage. On a closer examination, however, contours of stylised, regularly arranged leaves begin to emerge amidst the blots of colour. A gory vision gradually transforms into a carefully conceived and meticulously executed composition in acrylic paint, with bunches of leaves turning out to be stylised tops of trees from the Pahari school of miniature painting in India, complete with assiduous delineation of each leaf in black with an occasional white highlighting. As the initial shock subsides, we begin to admire the skill and the wit of the artist, and realise that the randomness of splattered paint and the care of a traditional technique should be taken in simultaneously and not in sequence. Qureshi, who was born in Hyderabad, Pakistan in 1972, has brought together the legacies of Abstract Expressionism, centuries-old South Asian painting practice and site-specificity in a union that is both harmonious and meaningful. The result is a powerful work of art.

A booklet accompanying the exhibition includes an interview with the artist by Navina Najat Haidar, curator in the department of Islamic art, and Ian Alteveer, associate curator in the department of modern and contemporary art. It also features a series of photographs of installations that the artist has completed in the past decade. From it, we learn that Qureshi has used patterns of tree foliage derived from Pahari miniatures to structure his installations at least since the autumn of 2006, when he painted them in shades of luxuriant blue coming out of taps, running down the walls and covering the floor and stairs of Sultan mosque at that year’s Singapore Biennial. In a 2008 installation, Time Changes, at the Gardens of Babur in Kabul, he carefully arranged them on the floor according to shadows of windows in a space lit by natural light. Lacking the spills and messy splatters of his later installations, Qureshi’s earlier painstakingly drawn leaf patterns looked invigorating and peaceful.

The artist’s first large-scale work in the purplish-red perylene maroon was installed in 2011 at Sharjah Biennial in the United Arab Emirates. In that work, Blessings Upon the Land of My Love, he filled a large courtyard of a former home of the British commissioner for the Arabian Gulf with Pahari-inspired trees drenched in symbolic blood. According to Qureshi, it was his response to violence in the Middle East and his own country, in particular two suicide bombings in Lahore, the city where he lives and works.1 This work had so much international resonance that it became the artist’s visiting card of sorts: in 2012, at the Sydney Biennial and now at the Metropolitan Museum, Qureshi applied the same template of traditional South Asian foliage patterns covered in the colour of blood to make installations of lasting emotional impact.

The power of persuasion in Qureshi’s large-scale work derives from his rootedness in the representational tradition of his homeland. The artist studied the art of miniature painting at the National College of Arts in Lahore and made this ancient technique the basis of his practice and teaching. To underscore the importance of this aspect of his art, a small exhibition of his miniatures paired with manuscript pages from Mughal and other courts in India from the 16th to 19th centuries has been installed in the mezzanine of the museum’s Modern and Contemporary wing. The art of miniature painting is painstakingly laborious and complex. It demands infinite attention to detail, precision in drawing and application of paint, and a method of work that requires one to think of compositional unity not as an end in itself, but as an after effect of the subject matter: above all else, miniatures are illustrations of narratives – they tell a specific story in visual terms. Their ample ornamental features frame the subject at hand. In the interview with Haidar and Alteveer, Qureshi admits that his work with traditional techniques and materials is necessary as a foil for his large-scale projects: “... In my art practice, I always like to strike a balance. If I am doing lots of abstract or site-specific work, before long I go to traditional miniature.”2

Like the ancient miniature painters, Qureshi actively resists pure decoration, always retaining a connection to a subject or story. The exhibition of his miniatures embraces a period from 1997 to 2011. This chronological range makes it clear that themes of war and violence preoccupied him long before his remarkable installation at Sharjah. In the earliest work on display, entitled Shahnama in reference to a Persian epic, the images of guns frame the page. The latest miniature, The Leprous Brightness, is as abstract as Qureshi’s art gets, with splatters of red paint and outlines of stylised foliage. The other works range from depictions of men and women engaged in everyday activities as in Moderate Enlightenment series, to collages of blue treetops painted in ink and gouache and pasted on a gold background as in Easy Cutting, to graphic instructions on how to make soldiers’ uniforms as in a work with the telling title How to Cut the Front of an Artillery Pantaloon. A hand-made artist book, The True Path, charts its subject matter as a perilous road lined with treacherous turns, explosions and artillery shells. Taking in this 15-year stretch of Qureshi’s miniature works on paper brings us to a realisation that they have all the elements of his installations – concern with violence, a strong attachment to abstraction existing side-by-side with faithfulness to a revered prototype, and a desire to involve the viewer on both intellectual and visceral levels.

Despite the skill of his miniatures and hand-made books, however, it is the artist’s large-scale public projects that brought his work to world attention. Now that Qureshi has made his strongest statement in an installation, he will have to make an extra effort to maintain the balance between working large and small, because it is the scale of public exposure that matters to contemporary viewers. 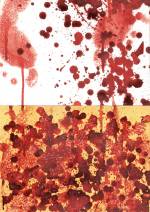 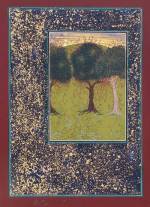 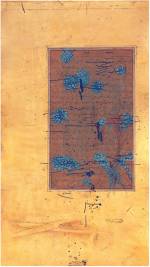 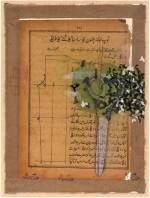