As the Whitney opens its doors for the first time at its new building, it is clear that architect Renzo Piano has not disappointed – the museum’s footprint is palatial, its presence majestic. And with most of its collection left offstage for future exhibitions, the inaugural show, America is Hard to See, is but a teaser

After a short seven years and an emotional rollercoaster that veered from despair at abandoning the storied institution’s Marcel Breuer building it has occupied since 1966, to excitement over reclaiming its downtown birthplace (with all that “downtown” now brings to the cultural table), 1 May 2015 opened to New Yorkers dancing around the maypole of the new Whitney Museum.

A pre-opening flutter of negative press (“ponderous”, “hulking”, “clunky”, “blue whale”) left architectural critics on the wrong side of the current aesthetic. Had they not understood the engineering exigencies of cantilevered sculpture galleries and New York’s largest column-free space, and the mandate to accommodate performance and film, a library and education centre, conservation labs, catering facilities and offices for 350 staff? Had they missed the new push to outdoors (articulated most recently at the Pérez Art Museum Miami by architects Herzog and de Meuron)? And were they impervious to the museum’s main purpose, defined at its modest debut by Gertrude Vanderbilt Whitney as a mission to promote American art and identify the practitioners “worthy of public attention”?

Put bluntly and simply, Renzo Piano has delivered a building that is as living and breathing a glory as a structure built of steel, wood and concrete can be – an archetype, prototype and destination-must to rival Frank Gehry’s Bilbao Guggenheim. A building for the ages, it won’t age – quite literally, as its materials are forged of the 21st century’s wind-, flood-, seismic- and pollution-resistant alchemy. A structure that weighs 28,000 tons, its light-saturated endo-skeleton confers a lilting lightness of being. An edifice that gives art a new way to dialogue, it serves as the very educational model it embraces. A gathering place built for the people, its footprint is palatial and its presence majestic.

Positioned on the Hudson, with lighthouse vistas slicing north, east, west and south, the museum’s tapered tower salutes the Statue of Liberty, while its angular asymmetry anchors the High Line – a park converted from the Meatpacking district’s disused railway line, whose southernmost section, weather willing, proves a fine way to access art. Past an open plaza canopied by the cantilevered gallery above, revolving doors spin you into the lofty aviary of a lobby that is designed to show art and is free to the public. Bookended by Untitled (the genius name for a restaurant offering every this-and-that appealing to the American palate) and a gift shop of sorts, it competes for attention with wow river views. Look up and you’ll see a ceiling crowded with track lighting and the architect’s industrial signature-reveal of girts, staggered trusses and the rest of the day’s haute-tech paraphernalia. Don’t flinch. Head up in one of the four lifts that constitute the structure’s spine – an art commission (I kid you not) and last major work by the late Richard Artschwager.

If you wish to follow the Whitney narrative, start on floor eight, and prepare to be dazzled. Every angle of show space and each work displayed has been thought and rethought for maximum impact. The works on paper (which form more than half the museum’s holdings), as well as the smaller paintings, are, by and large, hung in the eye-level linear tradition, though temporary walls have been thrown up to break the rhythm, mark transitions or feature standouts. Piano has honoured the Whitney’s brief of democracy by serving the viewers, artists, curators, security guards and city in equal measure. There are easy circulation patterns to prevent bottlenecks and conserve the energy spent figuring out which way to walk; there are clean, floodlit, uninterrupted wall-spaces, and the type of wide-plank pine flooring that is kind to feet. There is pause-a-moment bench seating by the indoor art to incline you to move on, and sofa seating by the windows to invite you to linger. The views are the museum’s bonus gift to us all. Framing the gritty railway, raw construction sites, chic shops and, most dramatically, the mighty river that enabled them, the views serve both as portals and artworks. Most tellingly, they serve the Whitney’s added mission. Valuable window space has been assigned to the conservation centre to provide the light needed for the restoration of contemporary work; the research and education centres, too, have been accorded precious views.

Most successful is the Whitney’s adherence to past mission statements – that it be “an organism that will grow as we grow”, that “the artist be the prime mover in all artistic matters”, that it be “democratic in its spirit, catholic in its taste”. As with any theoretical, of course, the experience is all. The opening show, brilliantly titled America is Hard To See (from a poem by Robert Frost) comprises around 600 out of its collection of 22,000 objects, and occupies all four floors of exhibition space. It is best to take the acoustic guide, because the scholarly handbook, in another nod to democracy, conveniently but misleadingly lists the artists alphabetically, in a brisk march from Acconci, Albers, Aitken, Aycock through the Bs to Chamberlain, Christo, Cornell, along the Ds, Es and Fs to Hammons, Haring, Hesse and Holzer, through the Ls to Mapplethorpe, Marclay, Marden, on through to Serra, Shapiro, Steir, along to Thiebault, Tuttle, Twombly, across to Walker, Winogrand – to conclude, 420 artists later, with Zittel. In contrast, the exhibition groups the art chronologically and, with a curatorial flair that augurs well for the future, throws in the welcome monkey wrench of subsections –each titled from a work on display – that zero in on specific concerns of the time.

What reads at first as a mashup of the familiar and unknown plays out as a ploy of Whitney’s overarching goal to examine art-in-context against art-in-contrast. Deliberately disoriented, you quickly see all is well. There is the Grant Wood! And there, the O’Keeffes! And they remembered the Benton, and thank heaven for the Hoppers, and charming to see Calder’s Circus, ripped out of one context but given new life in another that involves works by Bellows, Demuth, Cadmus, Marsh and Weegee, all of which reference public entertainment.

Move with the narrative past the urban realism of the Ashcan School (Glackens, Du Bois, Abbott), the riffs on small-town America (Burchfield, Wyeth), the Depression, labour unions, social change and, through a forceful grouping of works on paper, strong takes on the war years and horrific lynchings (Grosz, Shahn, Orozco, Evans, Lange, Lawrence). Burst into Abstract Expressionism, the movement that first planted American art on the world (Sterne, Kline, Still, Motherwell, Smith, Frankenthaler, Louis), and follow on to the pop gang that took it hostage (Warhol, Lichtenstein, Rosenquist, Oldenburg, Indiana, Baldessari, Katz). Take in Marisol’s 1963 Women and Dog – one of the few works of folk art the museum didn’t de-accession – before moving on to some highlights of the big guns (Rauschenberg, Johns, Kelly, Bourgeois, Stella, Serra). The minimalists and post-minimalists (Morris, Martin, LeWitt) – conflated to illustrate, in one of the many acute curatorial observations, that they practised simultaneously – cede to a painting moment (Guston, Rothenberg, Murray) that serves as a palate cleanser before plunging into the pounding assemblages and manipulated images of social critique and identity (Paik, Kienholz, Kruger, Sherman, Salle, Basquiat). A selection of light artists (Sonnier, Flavin, Irwin) are by way of a coda to the seventh floor’s vaulting, sun-flooded 18,000 square-foot exhibition space that struts the masters of Abstract Expressionism; Mark Rothko, Donald Judd, Mark di Suvero and John Chamberlain. Holding its own on the east wall, and facing a much smaller canvas by her legendary husband (“Let’s hear it for the women,” Gertrude Vanderbilt Whitney is crowing), floats a panoramic Lee Krasner. With no sense of pandering, due deference is given to equal time for gender, minorities and competing mediums (though the video material claims more space than the photographs), and the next exhibitions will include performance and address sound.

Inevitably, with most of its collection left offstage for future shows, the museum’s opening show is a teaser. Auguring well for that future, it provides a lilting teaching moment – a view, promised and delivered, through an astute, exigent and loving curatorial lens, of what constitutes noteworthy art in these United States. Stylistically, generationally and nationally (apart from a directorial interval in the 70s and 80s that excluded those not born in America from the criterion of a career formed there), the melting pot prevails – George Grosz, Willem de Kooning, Jonas Mekas and Yayoi Kusama were immigrants all. Takes on the myths of the white picket fence, the cowboy, racism, consumerism and progress (Bechtle, Prince, Bearden Ruscha, Rosenquist, Eisenman, Ligon) track the American dream through expectation, disenchantment, despair, protest, interrogation and a healing redirection. Surprises abound, in the form of new names pulled to the fore from the collection’s depth (Chiura Obata, James Castle), unexpected pairings (Cory Arcangel’s video game system and Carol Bove’s installation comprising books, shelves and a Plexiglas cube), and scrambled talents – who knew EE Cummings was a painter? But the vision is consistent, and the promise intact; over time, the Whitney’s inspired director, Adam Weinberg, pledges, as with an artichoke, to uncover myriad “layers of contradictions and complexities”.

The heart beats faster at what will come next. In the big picture will be investigations into colour and composition and materials, interrogations of process and compositional decisions, and new interpretations of work grown familiar. Already, revealing juxtapositions are shuffling the deck of received opinion – the canvas of Alfonso Ossorio, for example, which challenges Jackson Pollock’s lock on action painting, and the Christopher Wool in dialogue with Kara Walker and Sue Williams that make one rethink the arcane trope that words cannibalise thoughts, images grow them. And how happy are Piano’s riffs on the Whitney of yore – his nod to the staircase, to the jutting facade and, even, with his outdoor columns that channel Elsie Driggs’s 1927 portrait of Pittsburgh, a shared industrial aesthetic.

What of the caveats? A responsible critic must filter criticism. There was grumping about lifts that don’t access all floors, about the confusion of interrupted outdoor stairways, the obscured exit to the party terrace, the donor names posted just about everywhere, and the steep $22 (£14) entry fee for non-members. To the nit-pickers I say, recalibrate. A museum is not an office building. Nor is it an airport. Grand that more than 40 donors pitched in enough to realise a dream the state hasn’t funded. And what is the price of a toque-burger for art at this level, which, together with stunning views, plush window seating and outdoor galleries meeting the skyline, can richly fill the best part of a day? Better to extend your expectations to the height of the ceilings and the breadth of the terraces. Stretch your understanding of a museum’s mission as the Whitney has stretched the meaning of American art, and as the building’s vernacular has stretched the relationship of art to space, of viewing to absorbing, of appreciation to exhilaration, and of a museum to the fabric of the people it enlightens, the artists it nourishes, and the city it serves.

It is immeasurably heartening that art that is not static now has a building that is not static. It is overwhelmingly reassuring that the Whitney’s new iteration has left our beloved Breuer building, which until yesterday held the museum’s DNA, an exoskeleton – still iconic, but shed as a chrysalis must. And palpably wondrous that a building designed as an organism has emerged as both a nervous system and a palimpsest – living proof that design by a camel (1,000 people were involved) can, with intelligence, craft, science and love, produce a monarchical butterfly. 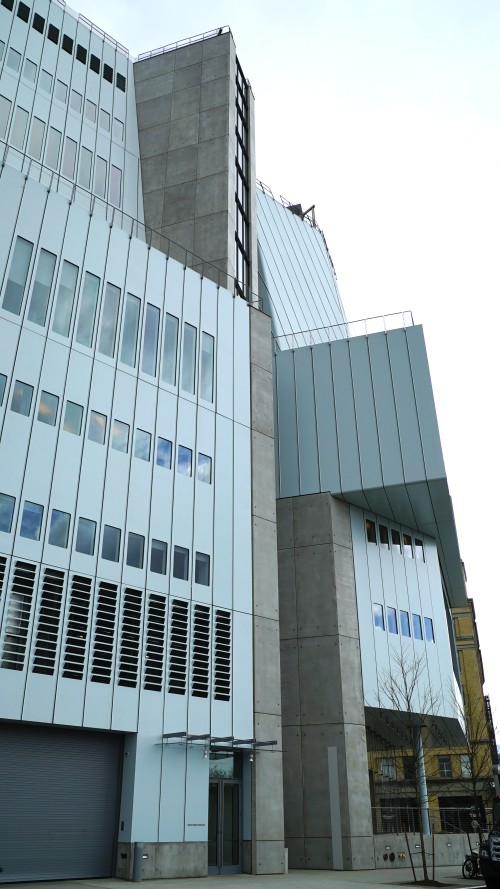 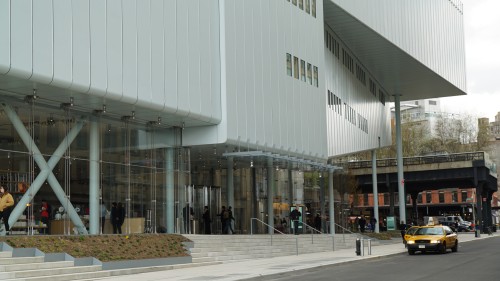 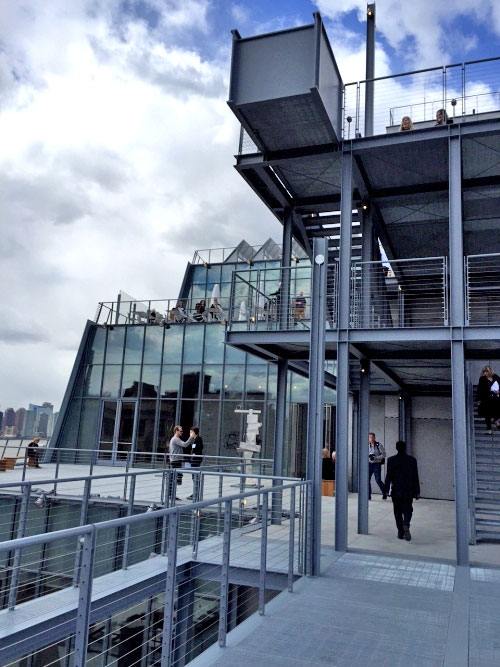 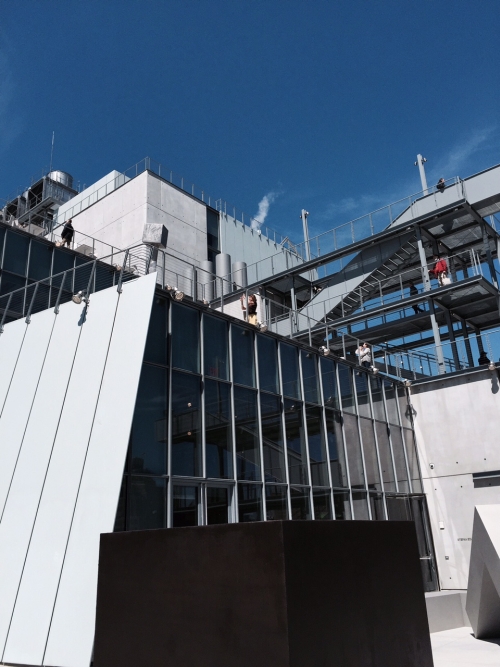 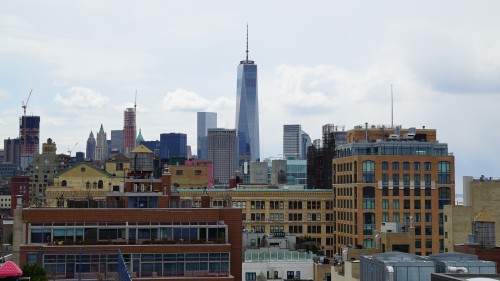 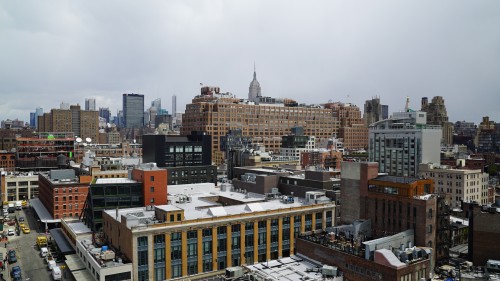 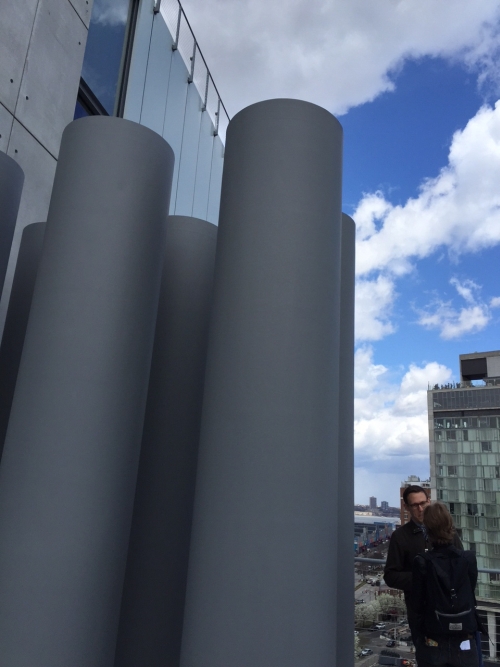 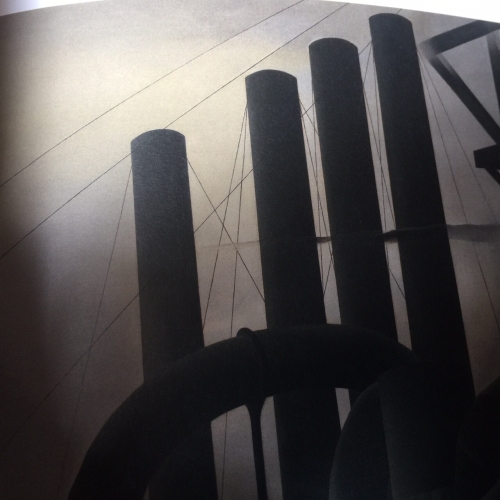 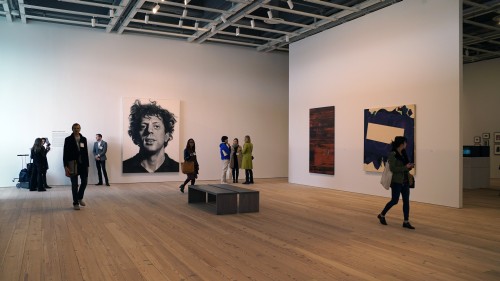 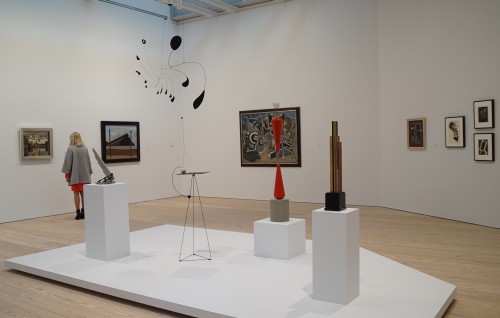 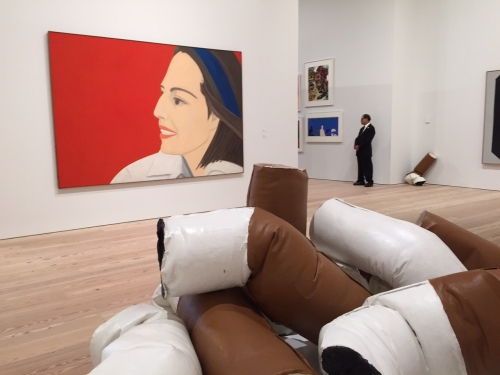 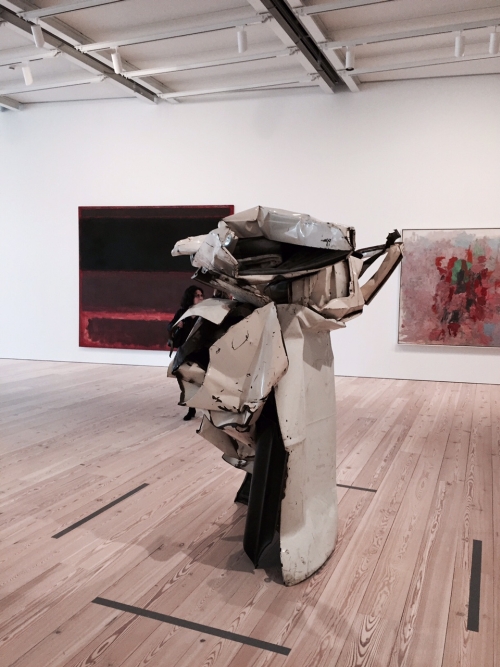 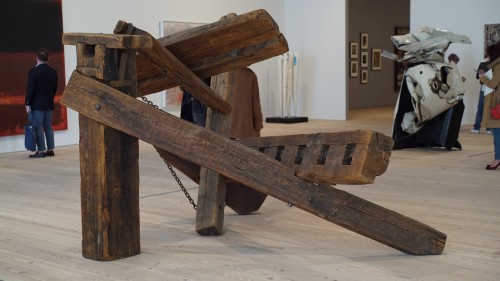 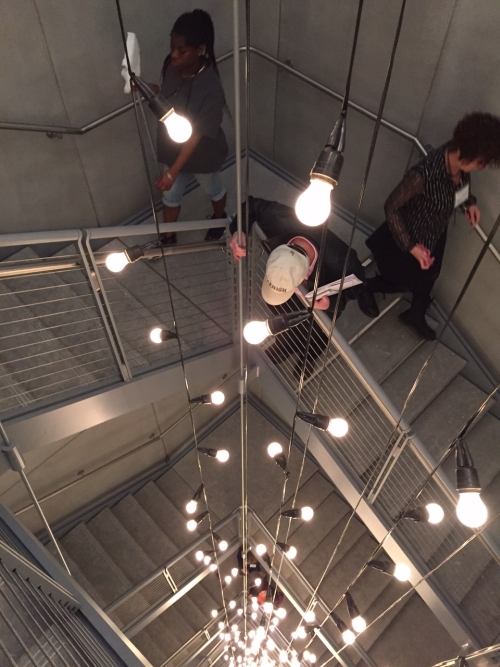 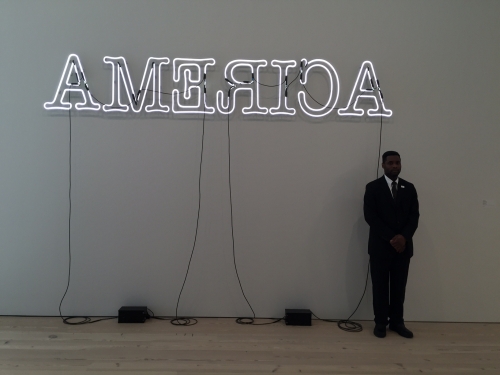 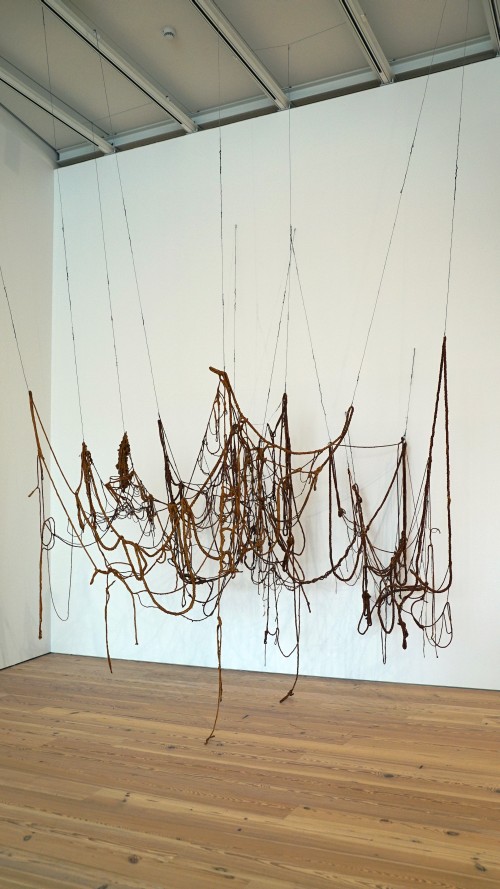 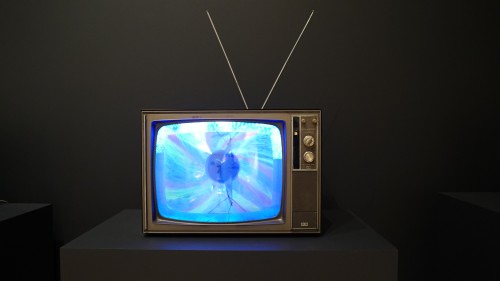 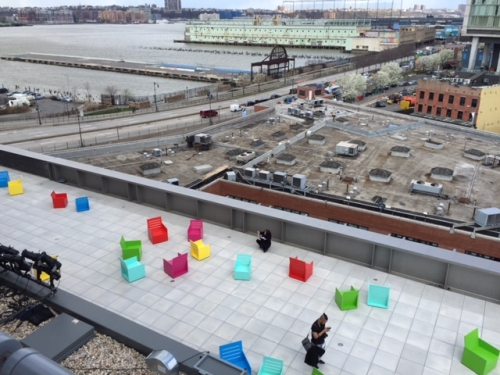 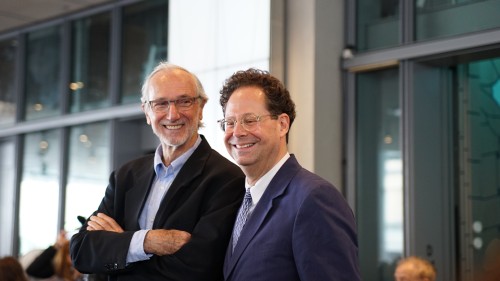