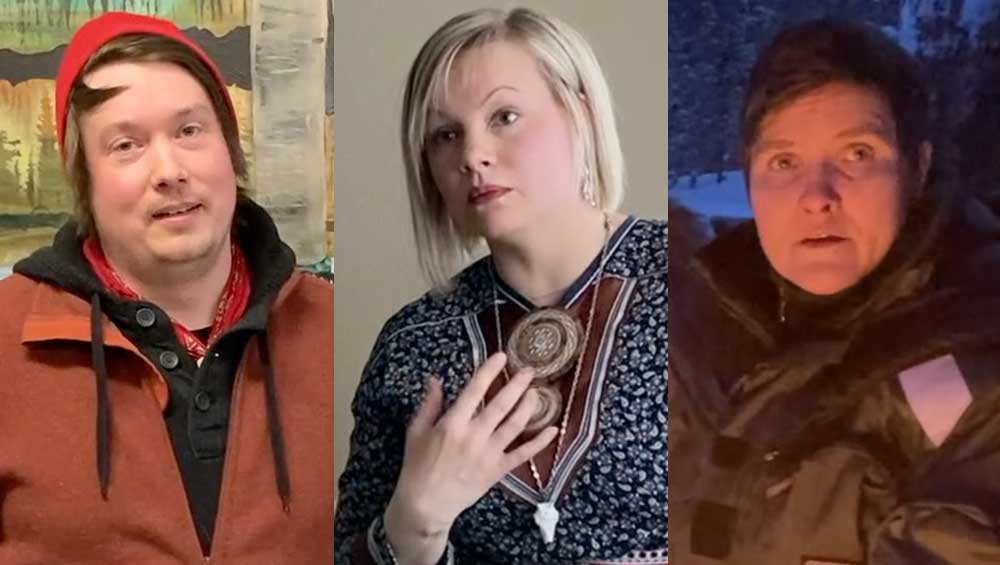 The Nordic Pavilion occupies a special place at this year’s Venice Biennale because, in a historic first, Sweden, Norway and Finland are represented exclusively by Sámi artists. The “Sámi Pavilion” sends a strong message about the need for self-determination and self-governance for the semi-nomadic Sámi people, who live – in an area they call Sápmi – across northern Norway, Finland, Sweden and the Kola Peninsula in north-west Russia, and continue to suffer colonialism in the form of land dispossession and discrimination in all four countries. “A lot of people still think that is a historical element and don’t fully realise that colonialism continues to be alive in the apparatus of these nation states, whether it’s in the legal system, in the health system, the education system or in society at large,” says pavilion co-curator Katya García-Antón. “The Sámi Pavilion project is really about bringing together three extraordinary artists, leaders of their generation, who have striven through their lives to defend lands and waters and to defend Sámi perspectives.” 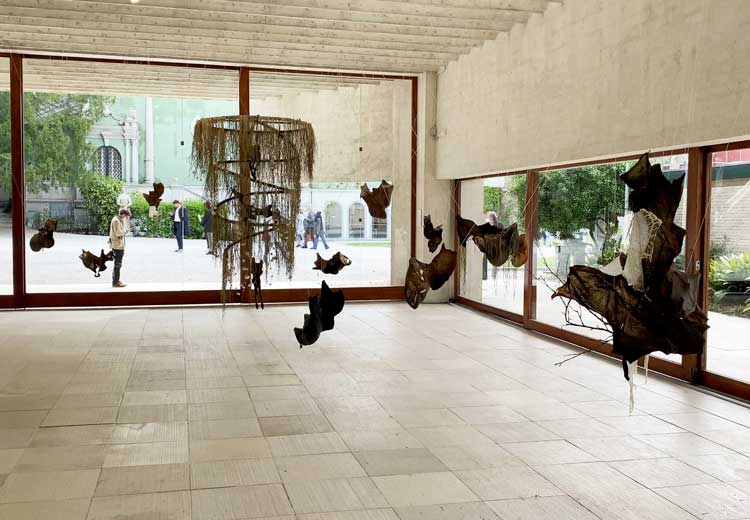 Although the artists are presenting very different work across a variety of mediums, they are united in their political activism. Anders Sunna and Máret Ánne Sara hail from families of reindeer herders who have had traumatic run-ins with the law over herding rights in their efforts to protect their way of life. Pauliina Feodoroff is a theatre director, land guardian and politician whose family were relocated from their lands in Finnish and Russian Sápmi and is fighting to save large swathes of forest in the Arctic region from industrial logging. For centuries, the Sámi, Europe’s only Indigenous people, have been subjected to forced assimilation, seen their languages suppressed and their land resettled and used for mineral and timber extraction. Art has become a vital means of resistance for these artists; they hope that the platform afforded by the biennale will put pressure on the Scandinavian states – which enjoy an international reputation as human rights defenders – to improve and safeguard Sámi rights and culture. 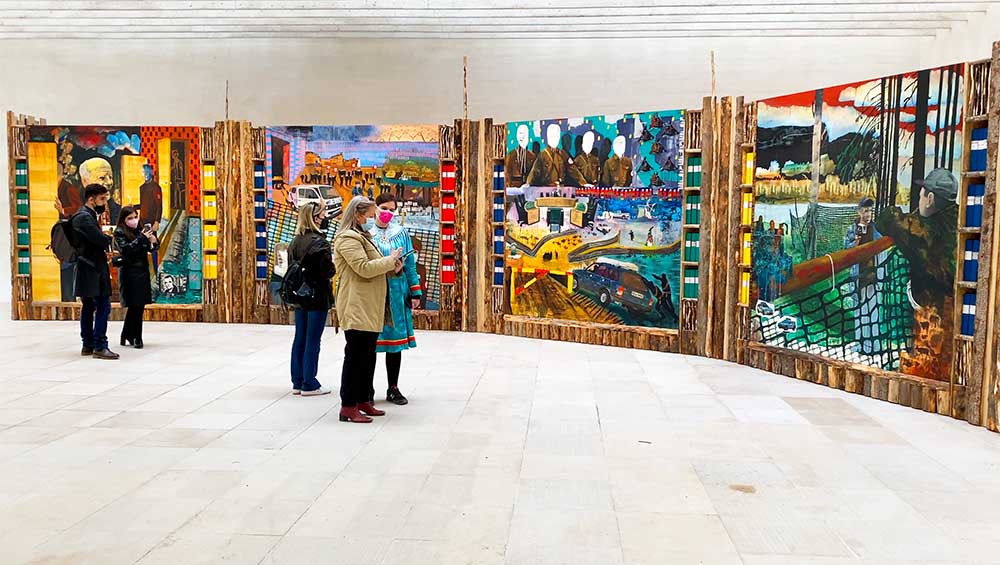 Sunna, who is from Swedish Sápmi, created an installation of five large-scale “history” paintings, each depicting a decade in the 50-year battle between his family and the Swedish authorities, mainly over reindeer-herding practices. “When the government had made you illegal, then everything is legal to do to you. So, you have no rights at all,” Sunna said, speaking at his studio in the Swedish town of Jokkmokk ahead of the biennale. The paintings, which incorporate collage and draw on Sámi symbology, are enclosed within wooden casings carved by members of Sunna’s family, with shelves holding folders of thousands of documents from all the court cases, and each work immerses the viewer in a sonic landscape composed of field recordings from the court and interviews. The charred remains of a sixth painting in the series lie strewn on the ground, representing an equivocal future.

Sara’s visceral presentation grew out of her four-year artistic campaign Pile O ’Sápmi, alongside her brother ’s unsuccessful legal challenge to Norway ’s forced reindeer culls. That project’s most famous iteration was a vast curtain of reindeer skulls, which was exhibited at Documenta 14 in 2017 and now hangs at the National Museum of Oslo. In her studio in Guovdageaidnu in Norwegian Sápmi, Sara described how a chance conversation with a reindeer herder helped her overcome her despair over her brother’s defeat and the Sámis’ plight, and inspired her Venice works. He told her: “Seeing the first red calves when they’re newborn makes all the struggles vanish. It strengthens your body, your spirit and your visions for the future.”

For this show, Sara collected the corpses of reindeer calves and incorporated them in a dramatic spiral mobile. Half hidden among hanging birch branches and grasses, the baby corpses appear to be in motion, caught in a liminal state between life and death. Surrounding the mobile, amorphous sculptural forms composed of hand-stitched reindeer intestines reference the stomach’s function as a container of emotional knowledge and the Sámi idea of “duodji”, narrowly connoting the tradition of “craft” as well as a philosophy of life based on the absolute interconnectedness of humans, animals and nature. 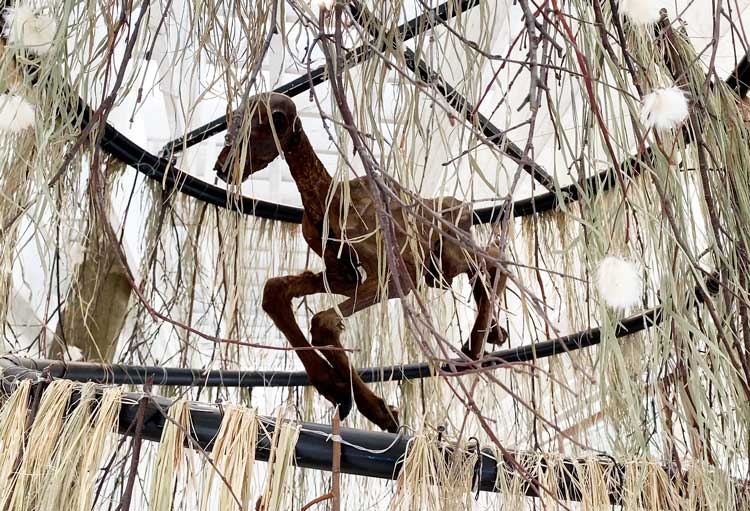 Feodoroff’s multipronged work at Venice has a tangible goal: to raise awareness and money to protect as much old-growth forest as she can. For the past five years, Feodoroff has collaborated with land guardians to create a “forest peace plan” for lands decimated by commercial logging. With the aim of eventually buying back privatised land for the Sámi to manage and renew, the artist has created a series of images of these landscapes to be auctioned off, along with the rights to visit the land every five years. She calls these “landpersonscapes” in recognition of the Sámis’ inseparability from land that European colonisers long characterised as empty wilderness. “Buy our art, not our land,” is the message.

In addition to this fundraising element of the project, Feodoroff has choreographed a three-part performance titled Matriarchy addressing issues around colonisation, Sámi notions of kinship with nature and matriarchal values of care and collectivity. The first part, titled Contact, enacts “the first proper greeting” between Indigenous and non-Indigenous peoples, demonstrating the Sámi tradition of gift-giving, which settlers misread for submission to domination. The second part, Auction, performs a sale of the landpersonscapes, and the final, jubilant segment, Matriarchy, celebrates the decolonisation of the female body and its communion with the land. “In our society everybody leads and nobody leads,” she said during a press trip to visit majestic old-growth forests flanking Lake Inari in northern Finland. “We don’t want to be governed and nature doesn’t want to be governed, it wants to be collaborated with.” 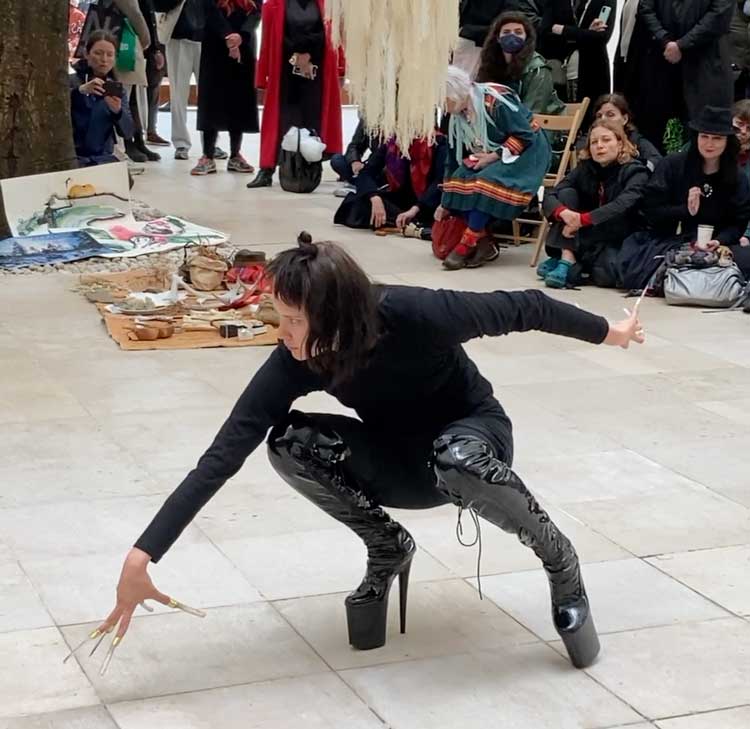 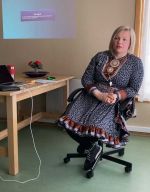 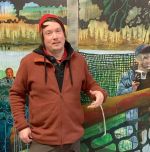 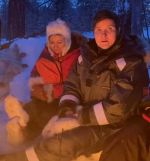