During September it has been interesting to find two exhibitions, one in London and a second in Edinburgh, in which the artists individually focus on aspects of landscape art. At the Rokeby Gallery in Store Street, Finnish-born artist Axel Antas, who now lives and works in London, has revealed an oeuvre that is inherently multidisciplinary, ranging from drawing and photography through to video. Underlying this is a personal obsession with ways in which the self becomes, so to speak, displaced in the environment and follows a route to what can only be described as individual self-abstraction, the Self confirmed nonetheless as a physical reality, within the landscape rather than above it.

Antas is exploring the realities of man's own relationships in nature. Figures are identifiable in the drawings, somehow occluded and viewed from behind. Large-scale drawings lightly transfigure dead trees floating in a flat tonal world. Humanity is fleetingly present through the use here of devices including hanging clothing and boxes such as bird boxes, bringing together man's activity and the natural world. In the show at Rokeby, Antas shows, in the 'White Out' series, undulating landscapes so over-exposed that the colour upon which landscape usually relies for identity is somehow bled out, leaving a bleached terrain. In another series, Antas intervenes more deliberately in the landscape creating drifting smoke clouds which enshroud each silent world presented. Antas thus questions the very sincerity of our human preoccupation with landscape, and the extent to which this needs to be demystified. It is as if the unseen artist is himself pacing slowly and pensively through the landscape, occasionally stumbling upon elements, other times himself enhancing the process of decomposition.

A dead but standing tree is given a new reality and existence by means of the insertion of a number of white balloons, which as they hang gently from the branches, restore the dead tree to a living presence in ('Tree Structure' [Unbearable Lightness, 2006]). It does seem that Axel Antas is at his best released from interior space, free to roam around the forest as he was in Finland. His country has a special, unconstrained relationship with nature. This for example is one reason why there are very few landscape architects in Finland, since architects themselves possess all of the necessary conceptual awareness of the realities of their natural habitat. So, hopefully, we can look forward to more fully documented examples of his skill at installation and at land art. The beautiful, shallow toned, large drawings can act as an introduction, within the gallery, but is the search for human fulfilment and interaction beyond the gallery that is most revealing in his work. Antas has exhibited widely in Finland and Scandinavia. He also represents Scandinavia this year in the current 'Statements Section' of the Paris Photo Fair, and he has been nominated for the Jerwood Drawing Prize 2006.

Marijke van Warmerdam's exhibition at the Fruitmarket Gallery in Edinburgh was entitled 'First Drop'. This has been her first major solo exhibition in Britain. She first developed her ideas in sculpture, and there is a spatial imperative in this early and later work. 'The Weight of Colour' is more clearly sculptural than 'First Drop', also shown. In her own words, this is, 'The start of what is and what will be; a sense of something about to happen, the rain drop that is just about to fall'. The microcosm of a second is definitive. Van Warmerdam plays with balls and pancakes (simulating the moon), which become a child's ball. Filmically, she throws the ball out of a mist-covered forest landscape. Both the moon images and the ball have a curious weightlessness. In the final room of the exhibition one finds 'Wake up!' This is the second of two new films, shot on 35 mm. The viewer is invited into a wide and sunlit meadow, without a form of human intervention (unlike Antas' work). The human presence is then not evident, but simply perceptible all the same.

It is significant that in a wholly unrelated way, both Axel Antas and Marijke van Warmerdam are exploring man's relationship with landscape in the modern world. But each artist explores such meanings in a wholly independent way. Antas somehow interposes the human footprint, as it were, more overtly, where it stops short of violating the natural world. Van Warmerdam, by contrast, holds back the human presence, and forbids its entry into the hegemony of the natural world. In the contemporary world, both artists are extremely relevant to the extent that they represent extremes of thought and are in self-denial of engagement. As the world spirals towards self-annihilation, neither artist offers salvation for humanity, but both express our acute dilemma and parody our human helplessness to help ourselves. 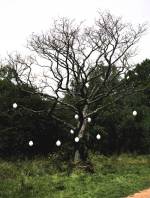