Maria Alyokhina: ‘The government media calls us enemies of the people … but I haven’t met anyone on the street who hates us’

Maria Alyokhina: ‘The government media calls us enemies of the people … but I haven’t met anyone on the street who hates us’

The activist art collective Pussy Riot formed in 2011 when Vladmir Putin changed the constitution in order to run for a third term as president of Russia a move that sparked protests across the nation. Three of Pussy Riot’s members, Nadezhda Tolokonnikova, Maria Alyokhina and Yekaterina Samutsevich, were arrested in 2012 and put on trial for hooliganism motivated by religious hatred after performing a protest song in the Cathedral of Christ the Saviour in Moscow.

The lyrics of Punk Prayer took issue with corruption in the Russian church and openly criticised Putin, calling for the “mother of God” to “become a feminist” and to “drive Putin away”. Until this point, the group had remained anonymous in their brightly coloured clothes and signature balaclavas, but the trial and subsequent sentencing of two of the three women – Alyokhina and Tolokonnikova – saw them thrust into the international spotlight. 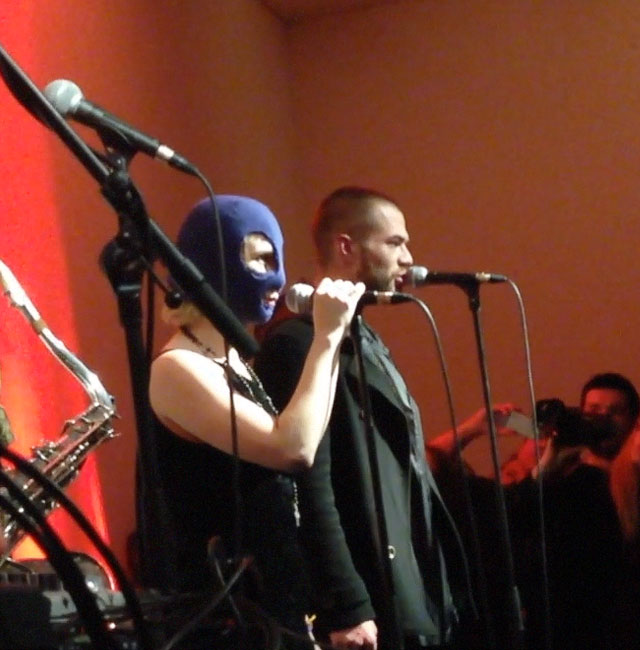 After serving a two-year sentence in a penal colony, during which time they suffered regular humiliations, including forced gynaecological examinations, they were released as part of an amnesty timed to coincide with the 20th anniversary of the Russian constitution and, conveniently, only months before the Sochi Olympics. Alyokhina, with typically uncompromising defiance, called the release a PR stunt and prepared for the next demonstration – this time at the Olympics, where the group were attacked with horsewhips by patrolling Cossacks. 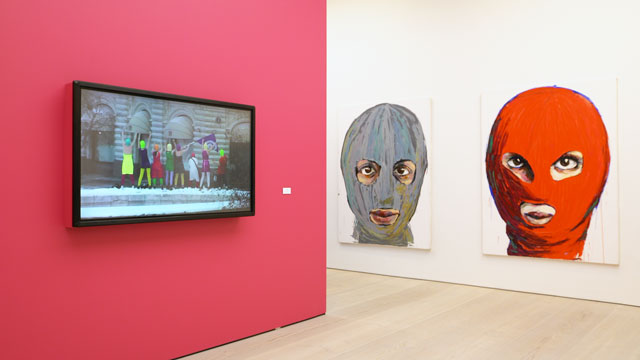 Undeterred by their treatment to date, Pussy Riot grows more prominent, and their audience increasingly international. They now produce glossy music videos aimed at highlighting injustice and lambasting those in power at home and abroad. Songs, such as I Can’t Breathe  – named after the last words of Eric Garner, a black man who died while held in a chokehold by a New York Police Department officer – and Make America Great Again, tackle racism, misogyny and homophobia in the US. 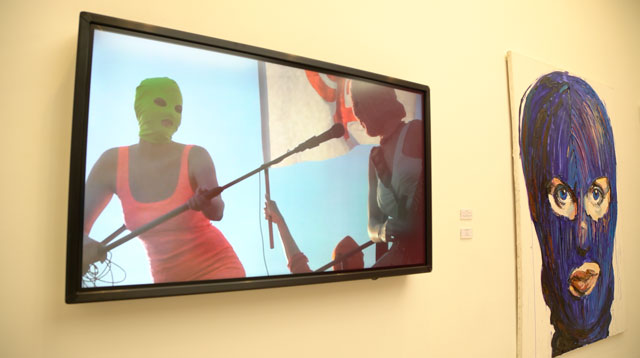 But Pussy Riot have not forgotten the fight at home. Alyokhina and fellow activist Olga Borisova were held for several hours in August after protesting against the imprisonment of Ukrainian film-maker Oleg Sentsov, who is serving a 20-year prison sentence in Siberia. He was accused of helping to plot a terrorist conspiracy and convicted after what has been likened to a Stalin-era show trial.

Alyokhina has documented her experiences in a book called Riot Days, which was published by Penguin in September. In it, she recalls her arrest, trial and imprisonment in 2012 with defiant, punchy prose and it has won praise from Marina Abramović and Margaret Atwood. A group performance of the same name incorporates text from the book with imagery of Putin and street protests that plays out on a screen to the rhythm of a synthesiser and the staccato notes of a saxophone. This rendition – a manifesto, as Alyokhina calls it – does not ignore the fact that this year marks the centenary of the Russian Revolution.

Alyokhina came to London, in part, to open Art Riot: Post Soviet Actionism at the Saatchi Gallery, an exhibition exploring 25 years of Russian protest art. It includes the work of Pyotr Pavlensky, a protest artist who has come to prominence for some extreme physical performances, including sewing his mouth shut, rolling naked in barbed wire and nailing his scrotum to the cobblestones of the Red Square in front of the Kremlin. Pavlensky was also due to be at the opening of the exhibition, but was arrested in October for setting fire to the doors of the Banque de France, in Paris. 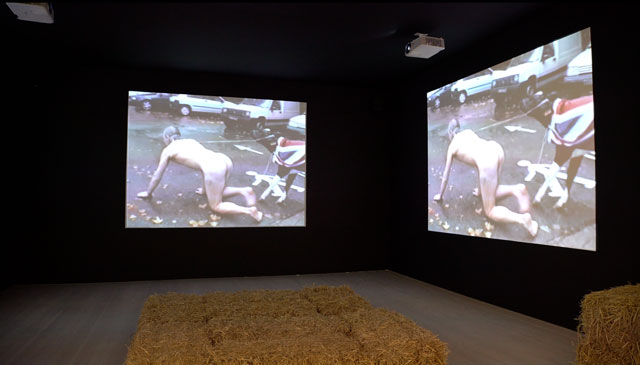 While Pavlenksy’s actions might cause discomfort for the empathetic viewer, Oleg Kulik’s work is shocking for a different reason. Kulik spent five years running around the world acting as a dog to highlight the plight of people forced to live hand-to-mouth in the years following the collapse of the Soviet Union. In some photographs, he appears to engage in bestiality and in others launches himself at strangers on the street, wearing only a dog collar. Art Riot is a fascinating exhibition, which helps to place Pussy Riot in the wider context of Russian protest art and actionism. And while their methods might differ, one thing these artists share is an unrivalled passion born from desperate circumstances.