The Human Factor: The Figure in Contemporary Sculpture brings together major works by 25 leading international artists who have fashioned new ways of using the human form.

Curated by the Hayward Gallery’s director, Ralph Rugoff, and spanning the past 25 years, The Human Factor focuses on artists who use the figure as a means of exploring far-ranging concerns. Compelling and thought-provoking, their work brings into play ideas about history, voyeurism, sexuality and violence, while reflecting on how we represent the “human” today.

From the exhibition at The Hayward Gallery, Rugoff spoke to Kate Tiernan. The following is an edited excerpt of that conversation.

Kate Tiernan: Past exhibitions here, such as Move, Light Show, and Jeremy Deller, had a buoyant optimism and a particular engagement with the audience. What is The Human Factor asking of the audience, and does it mark a departure?

Ralph Rugoff: I think it’s different from those three shows. Probably this show harks back to a show I did here in 2007, called The Painting of Modern Life, [which considered how] how painters worked from looking at photographic sources and how that enabled them to suddenly start using subject matter from basically anything. It was also a show that brought up political and social subject matter, which some people might find challenging. I think it’s a mix; there is some work that is disturbing and other work that is entertaining and thought-provoking.

RR: It was seen that this development had happened, yet it hadn’t really been reported on by a major museum, and I think it’s really important to look at it. A lot of people will think of figurative sculpture as really retro and yet, clearly, there’s something strong going on here. Every show will ask different things of an audience and how they relate to it. People love to look at light and you’re looking at a phenomenon: here, it’s a lot of different details about how it’s made. That’s the first experience for me: all the work addresses people [with] a very basic visual experience. Without that, art isn’t really doing its job.

KT: Is there an uncomfortable self-reflection you are seeking to evoke in people – a departure from themselves into another world? I sense a meeting of the self physically, but also metaphorically. The disregard for human life and our reaction to it is ever present through the media, to which we have become increasingly numb.

RR: There is, and I’ll be very curious to see how the public responds to it. I was hoping to achieve enough of a balance of pleasure and discomfort. You’re willing to go for the ride: as you go through the rough gallery upstairs and into the room of dancers, it’s a moment of respite, and then you begin again. So there is also a lot of work upstairs that’s very humorous and, actually, some of Rachel Harrison’s sculptures are quite humorous, and sometimes it’s dark humour, which I think is an important part of the show.

KT: Those moments of stillness and reverie are interesting. How did you find the process of positioning different postures of the male and female form, as you have said, on the “same stage”?

RR: A lot of this work is treating the body as an object. There was a moment in modernism where the impulse was to try to make the form seem spatially dynamic, and you get these figures from Rodin where they are really moving. The Cook [Katharina Fritsch] is an exception to this: most of the body is represented as an object. It’s very still, frozen, and I can’t help but think some of this is the artist responding to all the images in society that objectify the body in one way or another.

KT: You spoke about the specificity of sculptural language and history. Is this something people need to be fluent in to engage with the show?

RR: There are two artists in the show who are both referencing the sculpture by Degas of a young dancer. Whether or not you know that particular work, you know the picture of the ballerina from a visit to the National Gallery, or from postcards. Most of the things we’re referencing are already things we see, such as public statues, monuments, the Victoria and Albert or the British Museum. Anyone who has been past a shop window will know the mannequin reference points. It’s never anything that’s packed into a particular reference.

KT: I know all the shows you have here are packed with a huge and eager audience. How do you feel this will impact on The Human Factor and our relationship to the work? I’m thinking about the current Marina Abramović show at the Serpentine Gallery, which is limited to 160 visitors.

RR: We will limit the number of people who can be in here because, with a show like this, you can’t experience it with a packed gallery.

RR: I can never predict what artists are going to do next and I don’t think anyone in 1988 when Jeff Koons made Bear and Policeman could ever have predicted what would follow. The fact that he was making polychrome wood sculpture using this technique from the baroque period was a shock: it just seemed mind boggling at that point, incredibly disarming.

KT: The first room, for me, is very powerfully postured, with Thomas Schütte’s wooden warriors and Paloma Varga Weisz’s Lying Man (2014), a carving in charred wood, holding centre court, and Weisz’s Falling Woman hanging from the ceiling, along with Fritsch’s solitary figure and backdrop. Did you know early on that they were going to be the opening works?

RR: At a certain point I did, and some of these things are dictated by scale. Schütte’s works are the biggest in the show and that’s our gallery with the highest ceiling. Fritsch’s things look great with a high ceiling. Someone once said the first sculpture was a corpse, that it was the first object to which an aura of life clung. I recall that history and link it with contemporary ideas about how we represent violence or commemorate war. I think Schütte’s sculpture is this pseudo-monument to this imbecilic aggression. It is a hard-hitting opening in some ways – you come in and it’s not the guy on the poster right away. But I think all the work is so great and interesting to look at. Each one offers you so much in terms of how it has been made. Even for people who don’t look at sculpture, the surface of Schütte’s work and Fritsch’s flawless, amazing carved figure on the ground, and the strange two-headed figure hanging are works that give you a lot of ways in. To me, it doesn’t seem like a slap in the face. The work invites you in, it gives you something.

KT: There are nine different nationalities represented here, and, for me, the works evoke themes of hopelessness, decay, defeat, self-destruction and conflict. Is this reflective of global contemporary art practice responding to what’s going on in the world, and that being an ever-present thing? Or is this a specific curatorial decision to be politically charged?

RR: I have to say it’s a bit of both. Obviously, you can’t have one without the other, and you can’t make that curatorial choice unless there are lots of artists addressing that. It’s not exclusive. There is no real political content to Ugo Rondinone’s dancers. I thought it was a really important part of that shift, and for artists to make work around those issues.

KT: How do you see the role of the gallery in asking the audience to think and look in a different way, such as Fritsch asking: “Why are we here”, “Where am I?”

RR: We’ve done some big installation shows here where we really immersed the audience in the work – they enter an environment. Light Show had some works like this and we had Walking in My Mind and Psycho Buildings. Such works do seem to be quite popular. People are surrounded by an environment, and they automatically start responding to it: they don’t feel they have to try to decipher what a particular meaning is, and their special orientation changes. A lot of this work does do similar things, but using a totally different approach. If you go up and look at those Paul McCarthy figures, I think a lot of this work does it through the use of the uncanny.

KT: Within the show, what is the relationship between spectatorship and voyeurism? Perhaps there is an uncomfortable feeling about being caught in that?

RR: That’s a key sub-theme. When we have figures on display, it’s bringing up that issue of voyeurism and how it relates to our aesthetic looking and, maybe, they’re not completely separate. When they’re entangled, it starts to bring issues of moral behaviour into conflict with curiosity and the desire to look, and those are things I think we wrestle with all the time. But I think if you’re in a room with 10 other people looking at the McCarthy sculptures, how you look at them becomes a public act. This gets back to the question of the theatrical, the staging, where you become someone reading from a script, where you start to think: “Why do I feel embarrassed looking at this, like I’m invading someone’s privacy, when this is a pile of silicone and hair?” Yet we have those feelings. 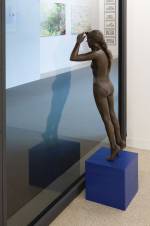 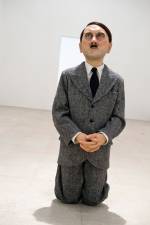