The creators of 'Destricted' describe the production as a set of 'explicit films'. The seven short films that make up 'Destricted' are, in fact, about sex, but the term 'explicit' should be understood in a specific sense: each short was conceived and directed by a controversial name in the contemporary visual arts scene and is an artistic interpretation of pornography, not merely showing sexual acts but showing sex in a particular way and presenting sexual relations as performances.

Of the seven 'directors', whose previous works bear some relation to the filmed branch of the visual arts, only two of them can be called 'filmmakers' in the traditional sense of the word: the American Larry Clark (b. 1943), who is best known for 'Kids' and 'Ken Park', and the French-Argentine Gaspar Noé (b. 1963), who created the polemic French film 'Irreversible'. Throughout their careers, both artists have dealt with and explicitly portrayed sex. The Italian Marco Brambilla (b. 1960), director of the Hollywood-style 1993 action movie 'Demolition Man' and the TV series 'Dinotopia', could also be considered as a filmmaker, but he has dedicated most of his career to video art.

The other artists who contributed to 'Destricted' are not professional filmmakers. The Serbian Marina Abramovic (b. 1946) is a pioneer of performance art; the American Matthew Barney (b. 1967) is one of the most provocative video artists working today and creator of the monumental art-film project 'Cremaster cycle'; the American Richard Prince (b. 1949) is a provocative painter and photographer who has posed questions of authorship in his oeuvres through reproductions and controversial self-remakes; and the British Turner Prize nominee Sam Taylor-Wood is a leading video artist and photographer whose work has centred on human emotions.

The diversity of the contributors is apparent in the films they have made. Unlike other feature films composed of related shorts (for instance, the classic 1962 Italian film 'Boccaccio '70' and the 2002 American film '11'09''01 - September 11'), in 'Destricted' each short is a completely independent entity and requires viewers to search for the creator's individual point of view rather than a relationship between the parts for a sense of coherence.

In a collection, one can find objects or themes that make up a 'complete set', but most often, the only 'summary', or definition, of a collection is the collection itself. Inherent to the idea of collecting is a tension between the singularity of each collected piece and the overriding concept that guides the collector. As such, 'Destricted' is a genuine collection; just like pictures in a museum, the particular images shown in each film are placed together by the power of an encyclopaedic intention, rather than by an organic principle.

Barney's 'Hoist' presents the creation of a man-machine entity (a man anally connected to a Caterpillar truck) in which the sperm assumes a constructive role.

Brambilla's 'Sync' is a traditional edition-effect film: a rapid presentation of a montage of sex scenes in mainstream and pornographic movies.

Pornography casts sex in its Olympic, almost athletic, dimension. Pornography is always centred on the sexual action of the body; the movements, the physical performance and the carnality are the main facets of the genre. In 'Destricted', one can see how each artist created a particular form in which to experiment with this concept. In this sense, Clark's 'Impaled' is the most compelling of the shorts. The documentary raises the question of why a 'normal' person would want to have sex in a pornographic way. The most important parts of the performances in this short are the characters' utterances. The candidates talk about sex and about the sexual act they would like to practise with their porn-star partners. When, finally, the sex scene is shown, the dimension of pure action has already been stripped bare and deconstructed.

'Destricted' (2006) premiered in London in September 2006 at Tate Modern and was released on DVD in the UK at the beginning of 2007. Following some special screenings at international film events (the 2006 Cannes Film Festival Critics' Week, for example), 'Destricted' was released on the commercial film circuit in Paris on 25 April 2007.

P.S.1 is a 35-year-old arts centre associated with the Museum of Modern Art in New York. It is the oldest and second-largest non-profit arts centre in the US. For more information on P.S.1, see Studio International, 'P.S.1, MoMA, New York' and www.ps1.org 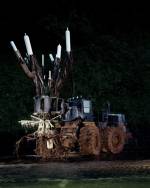