“… Like a serpent whose insides have blown apart, I gave up, sued for peace, and gave birth to my bloody clotting history of coiled and twisted eviscerate.” [Norman Mailer, Ancient Evenings]

Matthew Barney (b1967), best known for his CremasterCycle (1994-2002), comprising five films, with accompanying photographs, drawings, sculptures and installations, filled with anatomical allusions to the position of the reproductive organs during the embryonic process of sexual differentiation, is back. His latest project, River of Fundament, a further collaboration with Berlin-based American composer Jonathan Bepler, likewise comprises a film (given its European premiere at the Bavarian State Opera house in Munich on 16 March 2014), 15 large-scale sculptures, several series of drawings and some “archival” photographs, storyboards and annotated books (Libretti).

Loosely based on Norman Mailer’s novel Ancient Evenings, the five-hour film-opera follows the death and reincarnation of two principal characters, Norman Mailer himself and an anthropomorphic automobile. Mailer’s novel, criticised for its excessive nature when it was published in 1983, is set in Ancient Egypt between 1290-110BC and depicts the spiritual path of the nobleman Menenhetet I, who uses magic and deceit in order to be reincarnated three times in the womb of his wife, who then becomes his mother. Each time, his aim is to be reborn as something more worthy: nobleman, pharaoh, god. But in his third and final attempt to transform, Menenhetet III becomes stuck in the womb. In his contemporised rendition, Barney replaces reincarnation with recycling and Menenhetet’s soul with the automobile. His film comprises three acts, each of which took place as a live performance before an audience: REN in a car dealership in Los Angeles in 2008, where the 1967 Chrysler Crown Imperial from CREMASTER 3 endures its first death; KHU in Detroit in 2010, where it is reincarnated as a 1979 Pontiac Firebird Trans Am (thus bringing the car back to its birthplace); and BA in New York in 2013. The sculptural pieces created during the performances include Barney’s first major works produced from traditional sculptural and industrial metals such as iron, bronze, lead, and copper, and the key piece is a work known as DJED, created by pouring 25 tons of molten iron (the melted body of the Chrysler Crown Imperial) from five custom-built furnaces into an open, moulded pit – shaped like the undercarriage of a Chrysler Crown Imperial, modified to evoke the ancient Egyptian “djed” symbol, associated with Osiris, the god of the dead – at the site of a derelict steel mill along the Detroit river. This work, created during the performance KHU and comprising three components – the oversized reservoir of the furnace, the cast of the floorboard, and the overspill – forms the centrepiece of the exhibition at the Haus der Kunst.

Perhaps the central question of this enormous exhibition, which occupies more than 604 sq metres (6,500 sq feet) in the concrete monstrosity, constructed between 1933 and 1937 as a monumental exemplar of Nazi architecture and propaganda, is whether or not there is such a thing as a coherent identity that remains constant, not just throughout our lifetime, but on into the next, surviving the gateway of physical death. Much reference is made throughout to ancient Egypt and its burial traditions, including, in particular, the first work the visitor encounters, Canopic Chest, cast with the remains of the front end of the Chrysler Crown Imperial. The work, which looks like an uprooted tree with clods of earth and rock, severed roots, and protruding wires, makes reference to the chest into which four canopic jars, containing the internal organs of the deceased, would be placed during Egyptian funerary practices. It was believed that these body parts needed to be preserved together in order to enable a safe voyage into the afterlife. There is something about the sculpture that suggests the aftermath of a disaster, Armageddon, the apocalypse: the colour of charred remains, it is easy, standing before it, to imagine the smell of death and ash.

The long central hall of the gallery displays Boat of Ra, conceived both as an inverted version of Mailer’s attic and a stranded or sunken shipwreck. Carved out of wood, the growth rings resemble water ripples and the sand mould of Mailer’s study is encrusted, as if by barnacles. Again, iron “roots” protrude, and loose ropes are cast out across the floor, both holding the ship tied to the past, but also propelling it forwards towards the future. Every details carries multiple references, to ancient Egyptology, to Mailer, to consumerism and commercialism and the collapse of the automobile industry in Detroit, to Barney’s own previous work: nothing is happenstance or left open to interpretation, and yet, entering ignorant, one could easily weave narratives and cast allusions to all manner of self-created fancies.

The exhibition also includes four series of drawings, further exploring the character and thematic development of the project. Typical for Barney, the drawings work with non-traditional materials such as petroleum jelly, metal leaf, lapis dust and high-density polyethylene (HDPE, a plastic derived from crude oil). The frames form an integral part of the works too, functioning, perhaps, as portals from one life to the next. One series, Soul States (aka the White Drawing Series), developed around the time of the KHU performance, explicitly references the seven stages of the soul as it passes from death to rebirth. Complex pencil sketches, maps, with several layers of work and often a blue wash over the top, these works are macabre and grotesque, otherworldly, underworldly. They depict birth, blood, fluids, wires and whorls, roots and veins, all merging and intertwined. Another series, Yellow Metals, comprises drawings made directly into cast sheets of bronze, brass and copper. Through the hierarchy of metals, these drawings represent Mailer’s characters’ progression as well as the alchemist’s unattainable ambition to produce gold from other metals.

So, do I like the exhibition? No, not really. Is it clever? Yes, extremely. Although an archive and documentation of three live performances, as well as of the film-opera of the same name, the exhibition stands alone as new artwork in its own right. It is intricately thought out, and, on reading highlighted extracts from Mailer’s novel, as displayed in Libretti, it is apparent just how completely and deeply Barney has felt and interpreted the text, visually and viscerally, layered with metaphors. Combining science, philosophy, alchemy and mythology, Barney narrates discursively on the themes of life, death and rebirth. With the film-opera, live performances, photography, sculptures, drawings and installations, this really could be seen as a Gesamtkunstwerk – an appropriate feat, then, for a monumental exhibition being held in the house of Nazi propaganda, the Haus der Kunst.

A modified version of the exhibition will travel to Museum of Old and New Art in Tasmania, Australia in late 2014.
RIVER OF FUNDAMENT premiered at the Brooklyn Academy of Music on 12 February 2014. It will tour internationally to proscenium theatres through 2015. The tour is presented on behalf of the artist by the Manchester International Festival. 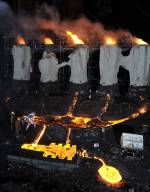 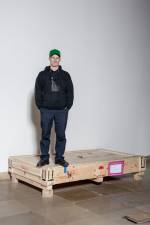