Film, opera, sculpture, ancient Egypt, contemporary industrial America, Normal Mailer – this exhibition has it all. But making sense of Matthew Barney’s five-hour, epic film and the works inspired by and made for it, is not easy – nor is it meant to be

Matthew Barney’s River of Fundament exhibition at the Museum of Contemporary Art (Moca), Los Angeles, fills all the gallery spaces at the Geffen Contemporary. It comprises an epic, five-hour film shown in a specially made cinema, plus numerous sculptures, drawings and installations inspired by, or made directly for and included in, the filming of River of Fundament (2014). A collaboration with composer Jonathan Bepler, the film is Barney’s most ambitious and largest project since his celebrated five-part film series Cremaster Cycle (1994-2000). This exhibition of works inspired by and made for his new film is presumably intended to reveal the incredibly weighty sculptural and object-based depths of this body of work as somehow distinct from, yet simultaneously integral to, the production of River of Fundament.

The Geffen, a former warehouse and now a series of open-plan galleries on three distinct levels, is large, sprawling and filled with light. Nearly 90 works of varying media and size are spread throughout the galleries in distinct sections that seek to break down the conceptual and narrative architecture from which Barney and Bepler constructed the film. Both film and objects were inspired by Norman Mailer’s 1983 novel Ancient Evenings, which was set in ancient Egypt. River of Fundament is, if nothing else, an operatic, cinematic epic that incorporates an array of sweeping metaphors, references and dramatic, overwhelmingly masculine, visual juxtapositions. The project casts an ancient Egypt reborn as contemporary industrial America in Los Angeles, Detroit and New York, primarily through a presentation of Mailer himself as the protagonist in a three-act opera. In each act, Mailer is played by distinct characters, as well as taking on the body of three American cars with names and identities derived from Egyptian mythology.

For their production, Barney and Bepler have set up a web of characters, chronologies, settings and props, as well as an array of different heavy metals that form a taxonomy, what they call an “inverted pyramid”, which presents as a psychological, historical and physical chart of alchemical narrative processes. Explaining River of Fundament itself is largely a complex and fruitless task, which the artists have attempted with a website (http://riveroffundament.net). What the film is, or isn’t, specifically about – a pool of mixed metaphors – is only part of the exhibition at the Geffen, as the objects and drawings take on a new life in the gallery spaces.

There are drawings and sketches of scenes and characters from the film on the gallery walls surrounding the many immense steel, wood, bronze, gold and mixed-media sculptures, some of which weigh nearly 20 tons. The drawings are made with charcoal, paint, wax, graphite or pencil sketched on to different coloured papers – red, blue, black and yellow – that correspond to varying stages of the film. One set, titled River Rouge, is made with white pencil sketched against a deep blood-red paper, that deftly softens the sculptures and gallery spaces. Among these drawings on paper, there are plates of gold, bronze and lead, with small abstract and representational motifs rendered in their reflective surfaces. Both of these wall-based groups of work share a distinct subtleness that counters the intensity and harsh weightiness of the many hulking sculptures and casts, such as Sekhu(2014) and Canopic Chest (2009-11), both made of cast bronze and mixed media. Sekhu comprises three large bronze-cast sleds that replicate the scale and design of the sled technology used by ancient Egyptians to carry sarcophagi to tombs and the granite blocks used to construct the pyramids of Giza. Another large work, Canopic Chestis a mound of cast iron and bronze, from which the wreckage of a car emerges, covered in what looks like black clumps of soil or hardened sand. One of the first works presented as you enter the exhibition, it sets a particularly dour tone – this dark, moribund anti-monument obstinately insists that you look at the forthcoming works and galleries as thematic objects with some potentially deep formal and conceptual meanings in need of complex theoretical decoding and philosophical reflection.

The didactic wall texts and descriptions of the film and project repeatedly make reference to the overarching and sweeping themes of death and rebirth, but the materials and the sculptural forms, as objects in space, serve as illustrations, or facsimiles, of the notion of these thematic ideas. The simple argument is that the objects should be looked at in the film only and evaluated for their role in it, but Moca, and Barney, by making this a distinct exhibition that includes sketches and drawings alongside sculptures, have clearly stated that these works – which have been and will be sold and donated to collections around the world – are more than props from an operatic film: therefore, one can approach and critique the exhibition on these terms. However, when seen together in the Geffen’s large gallery spaces, their individual potency disappears. When presented as a sculptural montage illustrating the narrative order of the River of Fundament film, each work largely becomes a representation of its own capacity to be instrumental to the telling of a narrative arc, and not as an object of individual or even relational consideration and contemplation. Most of the objects, and their placement in the galleries as distinct groups from specific acts from the film, reinforce the assertion that they are not individual artworks, but are part of a whole. Whereas a project such asDanh Vo’s We The People (2010-14), a series of to-scale casts of the exterior structure of the Statue of Liberty, are certainly part of a whole, they are more conceptually interesting when distributed in various locations, as they become a metaphor for the far-flung, wide-reaching, yet largely deconstructable myth and ideal of American freedom, acceptance and exceptionalism.

While many of the sculptural works are formally literal and illustrative and emerge only as instruments of the film, there are a number that verge on pure abstraction. These abstract sculptures, such as Secret Name (2008-11), made largely in the same materials – lead, polyurethane, copper and zinc – accumulate as something ineffable and interesting due to their deviation from a depiction of the mythological reality Barney constructs. Secret Name has its own layers of formal and material intrigue, in part due to its untenable meaning, but also because it has unique and aesthetically interesting characteristics – the long, soft curve of a milky white and blue polyurethane oval meeting the hard, tarnished edge of a vertical lead pillar. When looking at the more abstract components of the River of Fundamentfilm, one wonders if this is what an exhibition of Alejandro Jodorowsky’s failed epic and fantastic film project based on the 1965 sci-fi novel Dune would look like?

In a way, the parts of the film are so interwoven, and so underedited, into a web impossible to disentangle, that they are altogether ineffective. They become their own fiction and mythology – but is this a measure of success or failure for an exhibition and a film? Perhaps a success and a failure as self- and cyclical mythology is a powerful form of storytelling that tends to persist, yet it is one that lacks substance beyond its seemingly endless string of metanarratives.  In the end, though, this exhibition does maintain an important thread of interest as the scale and array of the sculptures captivate the observer time and again. Yes, the themes are too big, too vapid and markedly tired; yes, the works are morose and hypermasculine. However, what Barney and the curators achieve with the Matthew Barney: River of Fundamentexhibition is a spatially coherent and dramatic, yet individually absorbing, display of an intricate, theatrical and cinematic object-based sculptural language. The faint rustle of cars driving by the Geffen on the highway outside punctures the capsule that is this exhibition and takes one, gracefully, out of the humourless, bizarre mythology that is the River of Fundament. 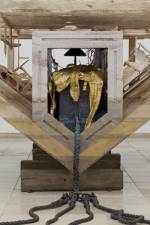 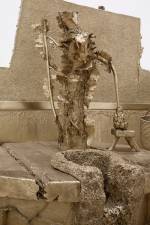