Kerry James Marshall: Along the Way

Kerry James Marshall: Along the Way

Finishing its last call on 22 October 2006 was the exhibition entitled Along the Way, covering the work of the American artist Kerry James Marshall from Chicago. This excellent show had already been at the Camden Arts Centre in London, followed by the BALTIC Centre for Contemporary Art, Gateshead, then to The New Art Gallery Walsall.

This has been an exciting and inspiring exhibition, which fortunately and, perhaps caustically, overlapped with the two USA exhibitions at the Royal Academy (sponsored by Charles Saatchi) and at the Serpentine Gallery in Hyde Park, London. It was fortunate because it makes us aware of the gaps in all-American interstate coverages.

One could also more euphemistically claim that the Marshall show balances and complements, by compensating for omissions, the two large shows. Cleverly, Andrew Nairne at Modern Art Oxford then stole a march on the London shows, aided and abetted by Jenny Lomax of the Camden Arts Centre, Peter Doroshenko of the BALTIC and Stephen Snoddy of The New Art Gallery Walsall. On the last day of the Oxford show, a Saturday, the gallery was thronged with visitors of the under-25 generation, and many more.

Viewing the work, the figures that people the picture plane in Marshall's show are jubilantly, emphatically black. The series of 2005 vignettes carry forward this lyricism and joy of life. But Marshall, as Deborah Smith in her essay in the exhibition catalogue rightly claims, pursues "images and ideas of blackness, projecting these into contemporary art by fusing classical and vernacular approaches together with conceptually oriented motifs". In 1993, the Los Angeles County Museum acquired Marshall's major painting De Style, his first acquisition by a major gallery. In Ebony, another painting, was inspired by the earlier collages of fellow black artist Romare Bearden (see article in Studio International 2004). After seeing In Ebony, Marshall made many collages in the period 1978-85. Later, he was inspired by the poet, Aimé Césaire, and his A notebook of a return to my native land. Today, Marshall is inspired anew by the 18th-century French Baroque artists, François Boucher and Jean-Honoré Fragonard, epitomising 'Love' in his work, done here in grisaille.

Luc Tuymans has said that he was "amazed by the coal-black portrayal of the figures in Marshall's paintings. I was impressed by how dignified and rebelliously clear the imagery that confronted me was". Marshall had also been deeply impressed by the paintings and collages of the pioneer American painter Romare Bearden (1911-88). He first came across Bearden's work in Ebony magazine and, describing his collage work, he now made a series of such collages himself, between 1978 and 1985, which initially followed the narrative strain of the Bearden collages. Marshall's new focus on love, as we have seen, took him into the works of Boucher and Fragonard, and he worked again in grisaille. Bearden's collages, c1964, seem composed by and largely of magazine images, cut rather than torn out of journals, as in The Street (1964) and Childhood Memories (1965-66). By contrast, with Kerry James Marshall, there is a fundamental difference from the work of Bearden. It is Bearden who chromatically at least, plays down the 'blackness factor'. There are exceptions, such as Thank you ... for FUML (Funking Up My Life) (1978), which is another collage of musicians, five figures playing in their black suits on stage. The figures in Marshall's Could this be Love? have a passing reference to Bearden's Profile Part 1/The Twenties: Mecklenburg County: Railroad Sporting House (1992) with its sexuality. In Piano Lesson (1983), Marshall reverts to total blackness in the figures. In the trenchant and tragic depiction We Mourn Our Loss, the blackest image is Martin Luther King, set between JF Kennedy and Edward Kennedy (1997).

Marshall was born in Birmingham, Alabama, and then moved to Chicago. From school onwards he was always made aware of the absence of black people in Western art. So we can say that throughout his career, the history of this artist has established a personal, critical structure, designed fully to challenge conventional art-historical genres. Some narrative capable of giving a living narrative to African Americans evolved, allowing the all-pervasive black figure a sound context. Fortunately, his fame had spread, following his inclusion in Documenta (Kassel) as early as 1981. From that point, his paintings had a profound and positive effect on the international art community. Marshall's Love series has the direct appeal of children's stories, illustrating the dramatic effect on black children when placed in a narrative, illustrative context.

In her catalogue article, The Ontology of Blackness: Re-inventing Blackness in the 21st Century, Valerie Cassel Oliver notes "today, a paradigm shift among artists seeking to embrace blackness inspires from earlier days, masking an evolution taking place within the larger political, economic and social landscapes". The elasticity now of our contemporary ethos signals a period of unprecedented innovation by black artists within the larger contemporary landscape, building on the precedent of Romare Bearden and Kerry James Marshall. 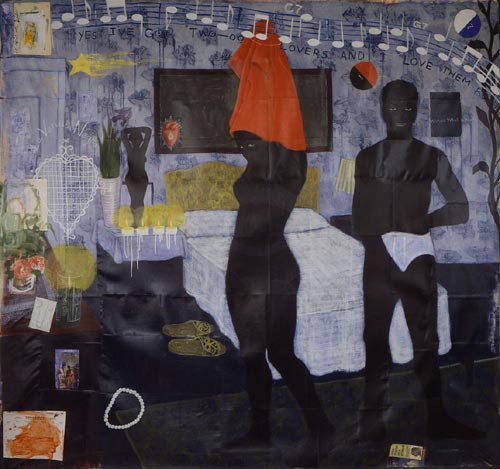 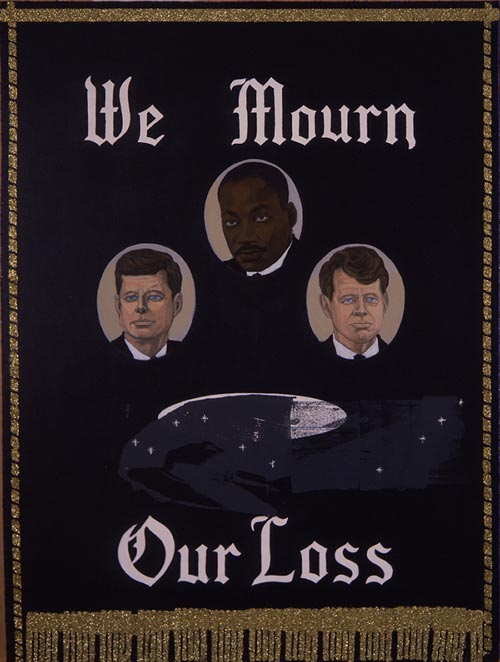 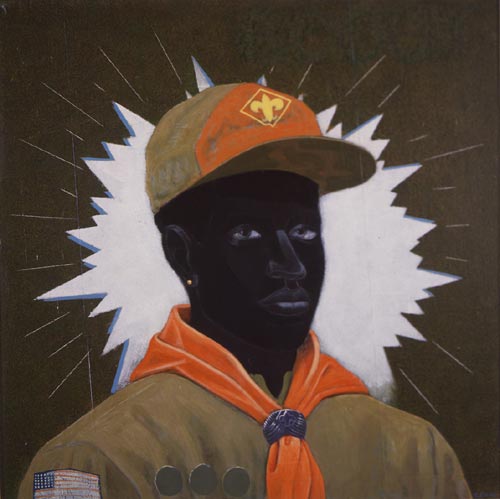 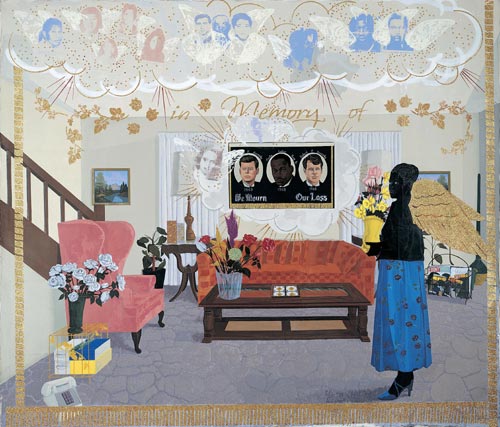 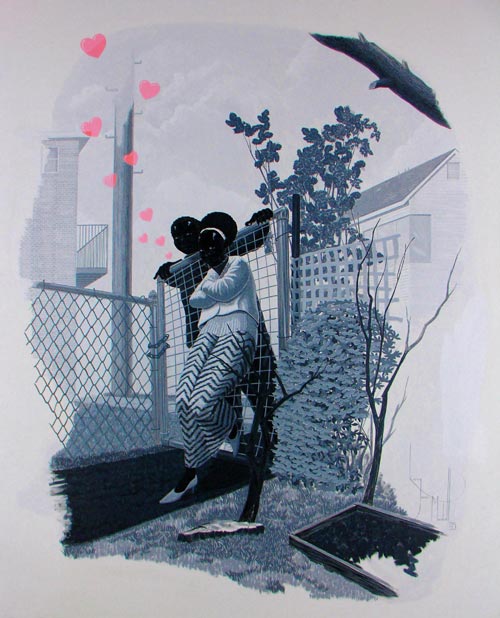