The Royal Academy lecture, 'Peter Zumthor: Summerworks', was given by the Swiss architect Peter Zumthor to a packed audience. The event was heavily oversubscribed. It was a brilliant tour de force, delivered in a somewhat conversational, deadpan manner. The architect seemed more like an Alpine farmer, modest yet canny. If one came across Zumthor on a mountain pass, appropriately near to his home (perhaps amid the sound of goat bells and the soft resonance of mountain streams) he would seem to be the kind of natural being who could stop and pass the time of day, as he did on this occasion at the Royal Academy.

But such ruminations would not be over-extended, and a touch of self-protective steel would be detectable. For how else could Zumthor have scaled the heights of the architectural world, where he stands today, slightly bemused, but certain of how it is? Certainly, as he has done to countless students, he would ensure that no one got lost in this arduous and treacherous terrain. He is essentially a guide across. Zumthor showed examples of his work in detailed context. Introduced into the narrative, quite deliberately to reassure, were images of his own studio/home, which emphasised the extent to which this realm is intertwined with that of his studio. These two domains become as one. The sequence of works shown ranged from a chapel built at Metternich in Germany, to a light and elegant well-shaded lakeside restaurant on the island of Ufnau in Lake Zurich, both exemplifying the special collusion of rigour and serendipity. A city centre scheme (Tribschen 2006) for Lucerne revealed how Zumthor can design on any scale. The ingredient always present is a strand of recurrently poetic emphasis, which weaves together many previously discordant aspects. A building set into a steep gradient, for thermal baths, at Vals, Graubunden, exhibits a critical dialogue with the place occupied there, a process of carving into the mountainside. Likewise, the housing scheme settled into green woodland at Biel-Benken, Baselland, is where Zumthor distils the essence of the German/Swiss/Austrian 'siedlung' or housing settlement, where one side of the enclosure is open, allowing an interaction with the surrounding landscape.

In his much sought after small book (more like a book of poems) entitled Thinking Architecture, Zumthor has set out the way in which he looks at architecture: 'a way of looking at things'. In his search for the 'lost architecture', reminiscences here from a life of design and practice (where research inevitably and invariably leads) vie with his childhood memories. Door handles, flagstones, different ways of closing and opening doors and windows, give together 'the reservoirs of architectural images that I explore as an architect'. The assuming of poetic qualities comes only if 'the architect is able to generate a meaningful situation for these, since materials in themselves are not poetic', but the inherent, sensuous qualities redeem the previously insensate materials, 'making them shine and vibrate'. One is reminded of a recent definition by Susan Sontag, in her introduction to the re-publication of the long lost Russian author Leonid Tsypkin's 'Summer in Baden-Baden' where 'it is not docu-novel' and 'several real worlds are evoked, described, re-created in a hallucinatory rush of associations'. Tsypkin preferred the films of Antonioni to those of his compatriot Tarkovsky. In the real worlds evoked by Zumthor, there occur seams of memory, about materiality become poetry, such as the cooler essence of Antonioni as compared to the dramatic progressions of Tarkovsky. Unwittingly I guess ... for Zumthor, too, there is an echo of Peter and Alison Smithson's thinking, as expressed in their book Ordinariness and Light (1970), where they chart a materiality of buildings (as expressed in their own St Hilda's College, Oxford). But Zumthor's memory sources and references go much further, in looking at John Berger, Italo Calvino, Edward Hopper, Joseph Beuys, Arte Povera and Per Kirkeby. Where, asks Zumthor, is the hard core of beauty? The composer John Cage, and the philosopher Martin Heidegger in Building, Dwelling, Thinking provide some further admissible evidence for the architect.

Zumthor lives and works now in a farming village set in the mountains, Graubunden. He refers always to buildings that distil 'the essence of place'. At various stages in his book he seeks out this essence. Zumthor says, 'the relationship of man to places and through places to spaces is based on his dwelling in them'. In expounding, through his buildings, and the memories that they evoke, his sense of architecture, Zumthor provides a refreshing, perhaps brilliant insight into the fundamentals of creative perception. If society in its breathless contemporary pursuit of 'quality' forgets such simple meanings, the buildings of the future will remain predominantly arid or sensationalist. Perhaps Zumthor could be said to have brought architects to their senses before it is too late.

The Royal Academy is to be congratulated for inviting Peter Zumthor to deliver this annual exhortation. As Zumthor said, 'The very core of my work is staying at home, forgetting the world around me and submerging myself completely in the tasks I have to do, the places I have to work for, the atmospheres I want to create. Research, the joy of working, of finding a form for an everyday ritual, for a special moment in the future life of a building not yet known; the pleasures of working together with my collaborators, young architects, in a concentrated way, in a specific environment where there is the light of the sun entering from the garden of flowers and maples, and food and drinks, and every once in a while my grandson, visiting me from across the street, Summerworks. Splendid concentration. My lecture will report on the outcome of that'. 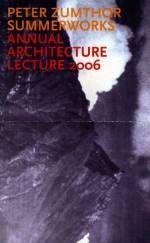