“Summer Dreams, Autumn Solace” 1
When is a Pavilion not a Pavilion? Can it not be a seasonal construction? What does it contain? Peter Zumthor2 has calmly addressed this dilemma with an architectural poem to silence and light. Unusually, he also chose the theme of “hortus conclusus”, the enclosed or secret garden, working with Dutch prize-winning garden designer Piet Oudouf3, who specified a remarkable, semi-wild array of plants, of a wide global origin, which were planted or sown into the long constructed rectangle within Zumthor’s structured enclave.

As Zumthor has said, earlier, in anticipation “the hortus conclusus that I dream of is enclosed all around and open to the sky. Every time I imagine a garden in an architectural setting, it turns into a magical place”. And he adds, ”I am looking forward to the natural energy and beauty of the tableau vivant of grasses, flowers and shrubs that Piet Oudouf has created and will plant”. But in practice quietness has inevitably proved hard to achieve. The sound of traffic on the adjacent Kensington Gardens road is ever-present. Overhead, unceasingly but audibly and visible in the middle distance air path, cruise long-haul and short-haul aircraft approaching Heathrow. And inevitably such is the attraction of the mysterious Pavilion that a capacity crowd of anything up to 100 or so visitors throng, sit, and even imbibe coffee from the nearby (but much appreciated) mobile Citroen van that acts as a kiosk. White occasional tables and folding stools have over a fortnight (spanning this author’s two Sunday morning visits) infiltrated Zumthor’s dream of silence, with more of the ambience of a sidewalk café. On the positive side small children are circulating (but not picking) with pleasure. Zumthor would probably not mind the pleasurable intrusions. There will be quieter moments. He also said that gardens are about quietness, as much as about light and darkness. These he has brilliantly achieved here, as a setting for visitors. It is best to get here at first opening, 10 am.

For Zumthor’s inner landscape, Piet Oudouf has created a remarkably diverse array of planting. To be specific, pure white Anemones, Deschampsia grasses, clumping “Liriope Muscari”, Asian violet – coloured flowers, Polysticium Ferns, and the green mintish Stachys. There are tiny flowers of Japanese “Lavender Mist”, plus the grey-blue flowered Scutellaria. Add in Geraniums, crumpled tussocks of “Festuca” grasses, scented Cimicifugae, soft pink spreads of Aster. Also, (for tooth-ache sufferers) leaves of tall-growing, yellowish Angelica Archangelica (few beneficial leaves have been picked). Originating from the great Siberian Lake Baikal come Irises of a rich lilac blue. Of Himalayan origin are the Persicaria, Alba, with clump giving small red spikes, vying with (from Canada) “Sanquisorbae” of clumped and massed white flowers. Rising to four feet in height stand rust-hued Foxgloves with their trumpet-shaped flowers. There are also reddish Astrantia “Claret”, and the fuzzy headed Eupatorium in flattened clusters of rose-purple flowers. This is to mention barely over half the 28 or so planted species. An early watercolour sketch section by Zumthor shows certain of the plants rising higher than the actual roof ridge, although this seems unlikely to occur. But the park birds are welcomed. Not much apparent as yet, so perhaps they come in at dawn, attracted by the scented silence. At all events the public are enthralled.

But what of the enclosure itself designed by Peter Zumthor? The simple rectangular form of the Pavilion is typically Zumthor in two main respects. The roof is for such a structure wholly self-supporting (no columns intrude). The elegantly engineered timber structure is enclosed within a skin comprising standard spruce plywood panels (2.4 x 1.2 metres). To achieve true blackness of the skin, Zumthor specified (after some experimentation) a combination of black “Idenden” (a polymer emulsion application) painted first over the panels alone. Hessian scrim was then unrolled and systematically stuck over all walls and roof overall both internally and externally: from the base of the Pavilion, up and over the roof (also panelled), and then under its overhang, achieving totality. Further layers of the “Idenden” followed until a deep, dark and unreflective black was achieved, wholly concealing the actual panel jointing underneath. The continuous internal timber wall benches, by contrast, were painted a deep but engaging, somewhat luminous dark Prussian Blue colour, providing full capacity seating. The round white folding tables and square folding stools do seem to have been a subsequent addition, lending a “cafeteria” ambience but allowing only one actual walking width before trading on the plants. But notwithstanding this, here as always is fully evident Zumthor’s creative role as a pure artist/architect/craftsman in a longstanding tradition, carefully preserved in his Graubunden Swiss valley homeland, and by fellow practitioners thereabouts, and in Vorarlberg. Peter Zumthor has brought the Swiss genre to international fame.

Zumthor intends that this absolute homogeneity and yet actual tactility of rough matt surface would, following the enigma of arrival, prompt in the public longer term memories of the secret “place” he has created. Concrete pathways curve through the grass lawn surrounds, first to each of six lateral entrances externally, and then via a peripheral internal corridor, and four collateral entrances into the garden space itself. It is the Hessian scrim that is the masterstroke here, inside, outside and overhead.

All corners have a curved condition (even to the edge of the continuous timber benching) so contributing to the mysterious quality of the whole. It was the project manager for the contractors4 who conceived an ingenious timber plate, which rigidly connects the primary vertical timbers with the flooring, with an inverted T form stiffening effect, so preventing any imbalance, and also conveniently creating the sectional form for the bench itself. Zumthor’s meticulous specification is met throughout. All works were overseen by the Zumthor office’s project architect Anna Page.

There is also a distinctly protective quality in this enclosure, which interestingly Zumthor early on (1986) actually achieved in his Chur (also in the Graubunden region of Switzerland) Preservation building for the early Roman ruins there, which it contains protectively. But here in London’s Hyde Park again is inserted the idea of a most special place, without presumption: developed, not for ancient archaeology, but for the very essence of life, natural growth and harmony to the public good. Whoever can acquire this remarkable temporary structure and remove it (in the Serpentine Gallery Pavilion tradition now) and in some other place endow it with a measure of permanence is truly fortunate. Then will Peter Zumthor’s intention that the materials, the essence of the pavilion, and its planted magic be an extended, intense and memorable experience, both full of time, and for memories held.

This is the 12th Pavilion to be created at the Serpentine each by a leading contemporary architect, from Zaha Hadid, Daniel Libeskind,5 to Toyo Ito and Oscar Niemeyer onwards. It is however possibly the most uniquely conceived, and the first truly to include a garden as its primary objective so appropriately for Hyde Park. From the Serpentine Gallery, Julia Peyton-Jones, Hans Ulrich Obrist (and Julie Burnell the project leader) must once again be complimented on their foresight and courageous initiative in selecting Peter Zumthor, accompanied of course by supreme plantsman, Piet Oudouf.

1. ‘Summer Dreams, Winter Solace’ comprises three articles in Studio International this August-September covering contemporary gardens. Following this one, the second will describe a contemporary ‘Prairie Garden’ and the third will cover the garden at a Maggie’s Cancer Caring Centre.
2. Peter Zumthor was born in Switzerland in 1943. He initially trained as a cabinet maker and worked in his father’s shop, but took up an architectural education first at the Kunstgewerbeschule Basel, then Pratt Institute, New York. Has several professorships in Switzerland and abroad. Renowned for Therme Vals, Switzerland (1996), Kunsthaus Bregenz, Austria (1997), Brother Klaus Field Chapel, Wachendorf Germany (2007).
3. Piet Oudouf’s most famous project is New York’s “High Line’, planting along a redundant mostly elevated railway line that runs through Manhattan. He has also worked at Lurie Garden, Millennium Park, Chicago; Wisley Royal Horticultural Society, Surrey; and the 2010 Venice Biennale (Il Giardino delle Vergini). At the 2000 Chelsea Flower Show he was declared “Best in Show”.
4. Ted Featonby, Project Manager on the Stage One contract made here a crucial innovation facilitating the stability of the columnless, self-supporting structure, so to achieve the architect’s intention of free space.
5. Daniel Libeskind focussed on the essence of a garden ‘placement’ in his E T A Hoffman Garden adjunct to the Jewish Museum Berlin (1995). 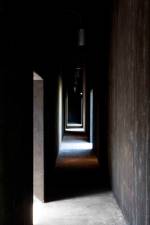