When we speak of executing something - an article, a work of art, a musical composition - we speak of working towards some kind of resolution, of there being a sequence of events causally related and moving forward in time. Sometimes the end product, in the case of art, will stand on its own without a trace of what went before, as if all moments working up to that point have been washed clean, leaving the work immaculate, but in a way, lifeless. When we see something so untouched and unblemished we might suspect that its existence has been instantaneous, without conception or incubation - something, perhaps, unworldly. It may be disconcerting to see an object without any evidence of humanity: without a fingerprint, or a scratch from a chisel, or the faltering of an ink line.

For an artist, there are many ways of working: some choose to work in a manner indicative of what has been described above; others take the line that the work should be indentical to the artist's intention, as is in the case of Sol LeWitt; some find that the execution is merely subservient to the idea, a poor relation whose presence is tolerated because no alternative rendition can be found. Others still, like Kenneth Martin, explore the way chance operations can be incorporated into an essentially systematic method. And then there are those who focus on the processes and decision-making that the artist makes in order to create a work. However, in this case, it is not the end result that matters; it is, rather, the actions that bring about the work.

Matthew Barney's series of works, Drawing Restraint, currently showing at the Serpentine Gallery, fits into the last category. These works do not refer to something static, a composed form, but reveal the way one action precipitates another in the course of making a work. When he uses a trampoline to stroke or jab the ceiling with his brush, he is exerting himself in order to perform a gesture; he may fail in his execution, but that is not the point. What is crucial in the life of a work is the attempt at doing something regardless of outcome. In this sense, his ethos is akin to that of experimental work of the 60s and 70s; for example, the Portsmouth Sinfonia or the Scratch Orchestra. Both these groups provided a means of expanding the musical repertoire by enabling the performer to extend the idea of what should be considered music. One can sweep the floor composing the brush strokes in time, or one can, in the spirit of La Monte Young, drag, push or pull items of furniture around a room in accordance with a set of instructions. In 'Houdini Rite', a piece by Hugh Shrapnel, the performer is instructed to bind himself in rope, and perform on an instrument of his choice. When the Portsmouth Sinfonia (a group of performers ranging widely in musical ability) played a repertoire of popular classics, they did so in an attempt at performing (each had retained in his mind the single instruction: to play as best he can), and not as a way of creating something polished; that is to say, not as a musical reflection of the score.

Like the novice musician grappling with an intransigent instrument or the accomplished one playing in an unfamiliar way (for example, John Tilbury playing a toy piano bound hand and foot), Barney grapples against the self-imposed restraints to perform to make gestures, and thereby produce artworks. The video work Drawing Restraint 2 (1988) shows Barney harnessed and pulling against a rope as he attempts to run up a makeshift ramp in order to reach a sheet of drawing paper pinned to a wall; it is also in this video that Barney is seen at a distance from the drawing reaching across by way of a long pole. Drawing Restraint 3 (1988) shows Barney in a high-ceilinged exhibition space carefully climbing the wall by virtue of many footholds running up to the ceiling. Once at the top, he draws; and then after completing his task, he descends. Several of the pieces show him on the deck of a boat using the motion of the sea as a part of the drawing process. In Drawing Restraint 15 (2007), Barney is seen suspended over the hull; and as he swings to the boat's rhythm, he draws.

In the domed centre space of the Serpentine, there are a number of works which are, if you like, indices to the video pieces. At the four corners of the space are scuffed footholds cascading down from a drawing; in the centre is a pole reaching up through an open flap in the ceiling. On the floor is a pair of what appear to be snowshoes, partially covered with churned, bleached wax. As in the video pieces, these works have undertones of quests and explorations and in a way remind me of those early Arctic journeys when explorers such as Peary, Nansen and Andrée made courageous attempts to reach a point: a geographical absolute. 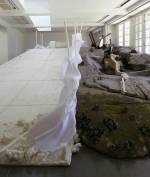 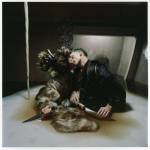 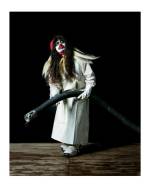